There’s a new Wednesday Addams in town, but is she here to stay? Here’s what we know about a ‘Wednesday’ Season 2 renewal, release date, and more. 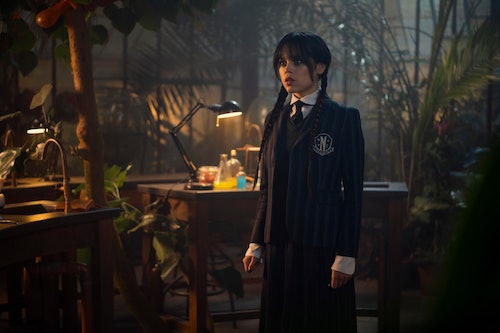 The Addams Family films may be best affiliated with the Halloween season, but this Thanksgiving, Netflix is giving fans of this creepy, kooky family something extra special to be thankful for. On Wednesday, Nov. 23, the streaming platform debuted its latest original series Wednesday, starring Jenna Ortega as the titular character Wednesday Addams — a role famously portrayed by Christina Ricci back in the original movies. The show will follow the adventures and exploits of a now-teenage Wednesday as she adjusts to life at Nevermore Academy. It's an intriguing concept to think of how Wednesday will adapt to being thrust into such a big social environment. (Remember how well it went when she got shipped off to camp?) It sets up a lot of great storylines to potentially explore, especially if Wednesday returns for a Season 2. But are more episodes even a possibility at this point?

At this time, Netflix has yet to announce any official pickup for a second season — which is not all that uncommon, considering the first season has yet to be released. If, however, the series proves popular with the public, it could very well be granted additional episodes in the coming months. That said, if it were up solely to the series creators, a Season 2 would be guaranteed.

Co-creators Alfred Gough and Miles Millar recently admitted in an interview with Empire, as per ScreenRant, that they are hopeful for the show's future and already have kicked around some ideas of where the characters' storylines could go beyond the first season. "Miles and I are talking amongst ourselves about it," Gough teased. "There's definitely more that you can explore in the world of the Addamses."

So, while a second season is still up in the air, fans should remain optimistic for more Addams Family goodness to come. In the meantime, we’ve got the first season to watch... and rewatch.

Who will appear in the series?

Though Ortega will serve as the main star, the rest of the cast is chock full of some very recognizable names. Catherine Zeta-Jones will portray Wednesday’s mother, Morticia Addams, while Luis Guzmán will serve as the Addams Family patriarch, Gomez, and Fred Armisen will don the role of Uncle Fester. Additionally, Isaac Ordonez has been cast to play Wednesday’s brother, Pugsley.

The series has some exceptional guest stars lined up as well. Game of Thrones star Gwendoline Christie will take on the role of Nevermore Academy’s principal, Larissa Weems, who still holds a grudge against her former classmate Morticia. That’s bound to impact Wednesday’s experience at the school — and not necessarily in a good way. Then, of course, Ricci will be making her grand return to the franchise, though in a very different role. She will portray one of Wednesday’s school teachers at Nevermore Academy.

Other stars we could expect to reprise their roles in Wednesday Season 2 are: 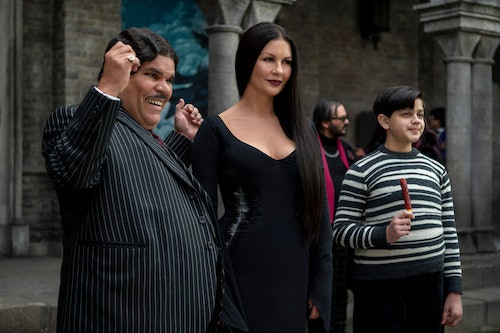 How many episodes are there?

The first season totals eight episodes, all released on Nov. 23. Of course, there will be more to come if the series gets the green light for a second season. Millar and Gough are eager for fans to meet this new version of the Addams family. They insist that, while it centers around familiar (read: iconic) characters, it serves as its own entity in the Addams Family universe.

So, while the future of this Addams-centric series remains up in the air, fans can at least take heart in knowing that the experience — regardless of how long it lasts — will prove to be a darkly fun and entertaining ride.