People actually are opting out of having kids because of the expense, thank you very much.

The post The ‘If You Can’t Afford Children, Don’t Have Them’ Argument Misses A Whole Lot Of Points appeared first on Scary Mommy.

It is amazing how frequently I still see someone say that if people can’t afford children, they simply shouldn’t have them. This comment usually emerges from discussions about universal childcare, extended maternity leave, or how expensive it is these days to give birth. The folks saying this are typically trying to make a point about independence and individualism. They subscribe to a “everyone take care of their own damn selves” mindset. The idea of anyone expecting any sort of social “handout” is offensive to them.

But there are several huge flaws in this argument.

I can’t believe we really have to dumb it down to this level, but … well, here we are. People who think you just shouldn’t have kids if you can’t afford them seem unable to realize that a person’s financial situation is not set in stone for their entire lives. They seem not to know that someone may start off in a rough spot but through a combination of hard work and opportunity get to a place where they’re able to comfortably care for their kids.

They seem especially unaware that a person could start off financially comfortable and then encounter an expensive, catastrophic life change that drains their savings and leaves them in a position to need help. What does the “If you can’t afford children, don’t have them” crowd expect people with older children who’ve experienced a serious financial setback to do? Give away their children since they now “can’t afford” them? Or do they expect people to be able to predict the future?

READ:  A Love Letter To My Young Queer Self

The same people who say “If you can’t afford children, don’t have them” are almost guaranteed to also be anti-choice. They’ll tell you not to have children out of one side of their mouth, and out the other side they’ll tell you that if you have an unplanned pregnancy, you better damn well have that child. “Just put it up for adoption!” they’ll tell you with psychopathic flippancy, as if the nine months of beating up your body followed by giving up your baby to someone else to raise is a simple solution.

It’s More Expensive Than Ever To Have Kids

The two times I gave birth straddled a major shift in the cost of insurance and in the way our country’s employers handled health insurance plans for their employees. My son’s birth, 15 years ago, cost about $75 out of pocket. My daughter’s birth, just four years later, with insurance coverage from a different company, was over a thousand dollars. In case you’re not a math person, that is over a 1,000% increase. That is not a normal appreciation of the cost of a good or service; that is fucking insane. The cost of childbirth has gone up even more since then and continues to rise, with the U.S. leading with one of the highest costs to birth a child in the world.

But that’s just the actual cost. The out-of-pocket costs — what people pay to give birth even when they have insurance — are far higher in the U.S. than most places in the world. That’s despite the U.S. being the most dangerous place in the developed world to give birth, with 50,000 mothers per year being severely injured and another 700 dying. When it comes to childbirth, we lead in cost, but not care. 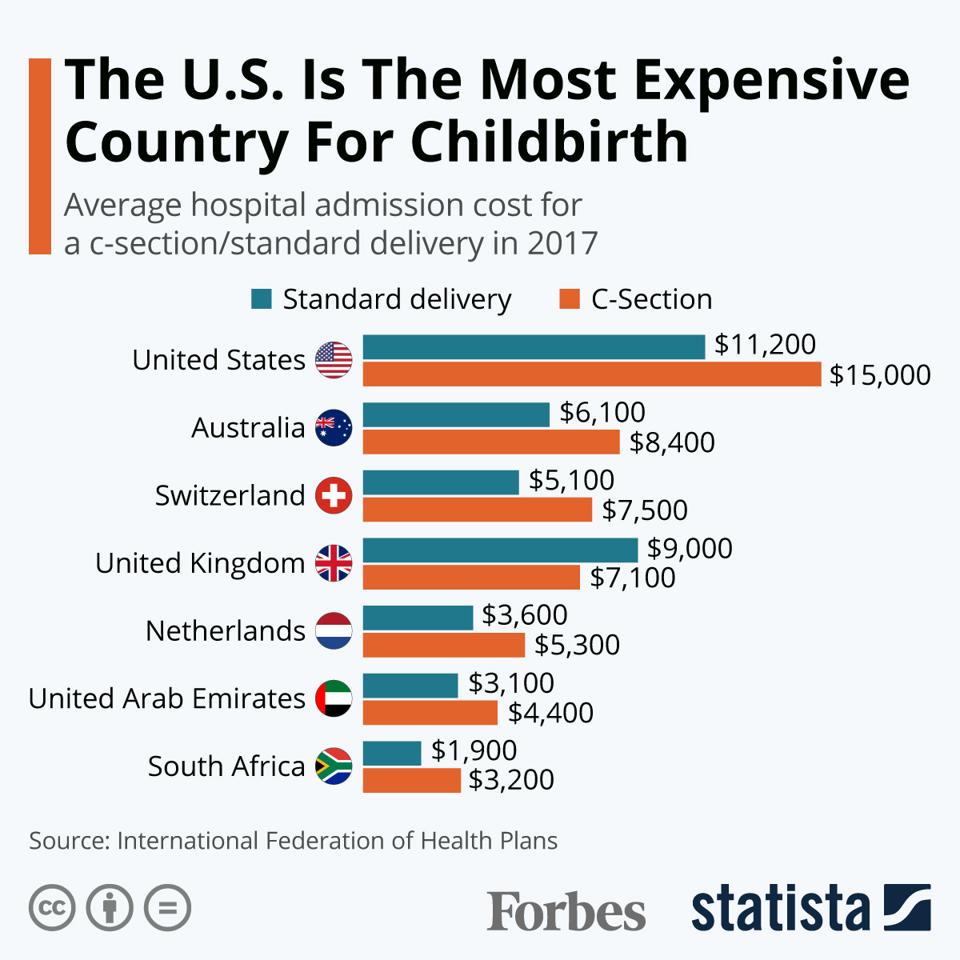 It’s More Expensive Than Ever To Raise Kids

Set the cost of childbirth and that first couple years of doctor’s appointments aside. Telling people they shouldn’t have children if they can’t afford them completely ignores the fact that it’s so much more expensive to have a family now than it has ever been — more even than just a generation ago.

Between 2013 and 2019, costs of basic childcare like after school care and other types of childcare rose between 16 – 58% — that’s as much as 7% per year. General annual inflation rates are typically between 1.5 and 3% per year. Meanwhile, according to the Economic Policy Institute, wages aren’t keeping up with overall economic growth. Workers’ share of their companies’ profits are on the decline. In other words, companies are growing, but they’re pocketing profits rather than giving their employees raises that align with overall company growth.

So childcare costs are rising faster than inflation, faster than wages. How are people supposed to keep up?

People Actually Are Opting Out Of Having Kids Because Of The Expense, Thanks Very Much

The most recent census data released showed the most dramatic decline in population growth we’ve seen since 1930, the second largest decline since the government started keeping track via census records in 1790.

Some of this decline in growth has to do with decreasing immigration, but we’re also seeing a declining birth rate. People are choosing to wait until they’re a bit older to have kids, having fewer of them, or opting out of parenthood altogether. Given the statistics discussed above, it’s not hard to see why. Young people entering the job market right now struggle to find affordable housing just for themselves. When they do the math for the additional expenses that would come with adding a child to the mix, housing and otherwise, they rightly conclude they can’t afford it.

I’d wager that most people under 30 right now can’t technically “afford” to have kids. Hell, I am fully set in my career and have a coparent with whom I share expenses, and I can barely afford my two. On just about every metric imaginable, from stagnating wages to the runaway inflation on health care, childcare, and college, this country has made it too damn expensive to give birth to, and raise, a kid.

READ:  The Case For Open-Book Tests And Exam Previews

So, maybe, instead of barking at people to just “don’t have kids if you can’t afford it,” people could start asking the more important question: Why is it so damn unaffordable to have a kid here in the U.S., and what can we do to fix it?

The post The ‘If You Can’t Afford Children, Don’t Have Them’ Argument Misses A Whole Lot Of Points appeared first on Scary Mommy.