A new study calls out the harmful myth that adolescents, particularly those assigned female at birth, identify as transgender due to social influence. 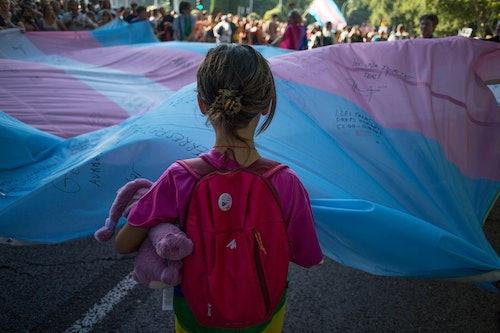 A large amount of conservative legislators have cited the idea of “rapid-onset gender dysphoria,” or the idea that the reason more adolescents are coming out as trans or non-binary is because of social influence from their peers, as a reason to enact transphobic and harmful laws that ban gender-affirming healthcare. A new study published in the medical journal Pediatrics discredits this harmful notion. Ultimately, the study validated what any parent of a transgender or non-binary child can tell you: no “social contagion” influences gender identity.

"The hypothesis that transgender and gender diverse youth assigned female at birth identify as transgender due to social contagion does not hold up to scrutiny and should not be used to argue against the provision of gender-affirming medical care for adolescents," Dr. Alex S. Keuroghlian, the study's senior author and director of Fenway's National LGBTQIA+ Health Education Center, and the Massachusetts General Hospital Psychiatry Gender Identity Program, said in a statement.

The researchers used data from the 2017 and 2019 Youth Risk Behavior Survey (YRBS) and honed in on the hypothesis of rapid-onset gender dysphoria (ROGD), which suggests that young people start to identify as transgender or gender diverse (TGD) for the first time as tweens and teens rather than as prepubertal children, and “that this identification and subsequent gender dysphoria are the result of social contagion.” The transphobic theory also suggests that children assigned female sex at birth are more susceptible to this supposed social contagion.

READ:  Joanna Gaines Regrets The Time She Chose Efficiency Over A Meaningful Moment

The researchers also found that the sex assigned at birth ratio of TGD adolescents did shift more towards those assigned female at birth, which at first glance would seemingly support ROGD. However, the researchers highlight that “the shift in sex ratio was driven by a decrease in the proportion of those assigned male at birth openly identifying as TGD, which further undermines the ROGD hypothesis. The percentage of adolescents assigned female at birth decreased from 2017 to 2019.”

Lastly, and maybe the most important point, the study lambasts the notion that tweens and teens are drawn to come out as TGD to “avoid the stigma of being a sexual minority” or because it will “make them popular among their peers.”

"The idea that attempts to flee sexual minority stigma drive teenagers to come out as transgender is absurd, especially to those of us who provide treatment to [trans and gender diverse] youth," said lead author Dr. Jack Turban, incoming Assistant Professor of Child & Adolescent Psychiatry at the University of California, San Francisco. “The damaging effects of these unfounded hypotheses in further stigmatizing transgender and gender diverse youth cannot be understated. We hope that clinicians, policymakers, journalists, and anyone else who contributes to health policy will review these findings.”

LGBTQ adolescents are four times as likely to attempt suicide than their cis-het peers. Bullying and negative treatment from peers is a strong and consistent risk factor for youth suicide. The Trevor Project, a suicide prevention and crisis organization for LGBTQ youth, found that 52% of LGBTQ young people in middle school and high school experienced bullying sometime in 2021, either in-person or online. The idea that teens are identifying as TGD to “fit in” is contradictory to the decades of studies showing the exact opposite.