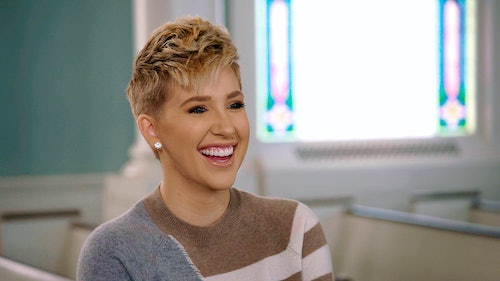 Reality TV star Savannah Chrisley woke up and her entire life was changed. The 25-year-old Growing Up Chrisley alum said on the most recent episode of her “Unlocked” that she was now legally (and otherwise) responsible for her siblings.

The move came after the children’s parents, Todd Chrisley, 53, and Julie Chrisley, 49, were ordered a combined 19 years in prison for fraud charges. Both TV personalities will also be required to serve 16 months of probation.

The podcast host shared that she has custody of her brother Grayson, 16, and niece Chloe, 10, after her parents were handed their prison sentence. In 2013, Todd won custody of Chloe after his son Kyle, 33, had some personal struggles.

“I may come home without both of my parents. That’s what the chances are,” she confessed. “That’s the likelihood, and that’s my new normal.”

She continued, “I come home Tuesday, and I have custody of a 16-year-old and a 10-year-old, and we spend our first Thanksgiving not as a family. I’ve never been away from my family for the holidays.”

Savannah then admitted she has a "level of guilt" as she has never had to have to worry about the whereabouts of her parents, let alone the fears that come with them being in prison. She sadly noted that now Grayson and Chloe "aren't going to have that same feeling."

“I think that's the hard part, I think there's a level of guilt too for myself, knowing that Chloe and Grayson aren't going to have that same feeling, of, 'Are Mom and Dad going to be home tonight?' " she shared. "And I think that's the hardest part, is me trying to navigate how to teach two children who aren't fully developed yet, that. And how to navigate the circumstances. That's a really difficult thing.”

She also confessed that no matter how hard the circumstances are going to be or how messy things could get, she needs to be there for her younger sibling and niece, presenting a positive attitude and acting as a supportive role model.

“I have to be a positive role model for Chloe and Grayson,” she later added. “No matter how hard it gets, I have to show up.”

Todd and Julie Chrisley were convicted in June of conspiracy to commit bank fraud, conspiracy to defraud the United States, and tax fraud, according to the Atlanta Journal-Constitution. Julie was also convicted of wire fraud.

The couple has denied all allegations and filed a joint motion for a new trial. Though that motion was not granted, their sentencing was delayed. However, a federal judge still found the couple guilty. The Chrisleys' former accountant, Peter Tarantino, was also sentenced to 36 months in prison on Monday, according to Deadline.

The Chrisleys are also ordered to pay restitution that will be determined at a later date. The couple has until Jan. 15, 2023 to report to prison.