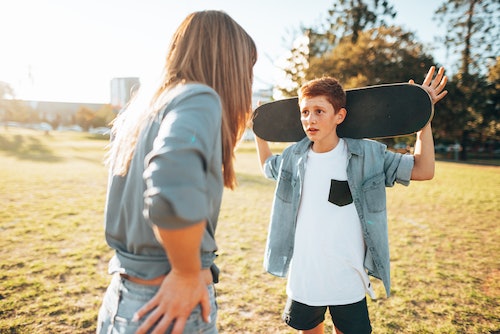 My son recently celebrated his birthday and opened a gift from us. I had been patting myself on the back for coming up with what I thought was the perfect gift. He was (briefly) excited about the concert tickets he received but then let out a huge sigh. “Elton John is your favorite; you don’t want the tickets?” I asked him, puzzled. “I love them; it’s just that… I thought this might be a phone,” he said, openly disappointed. “What would make you think that?” I inquired, rapidly growing frustrated by his lack of gratitude for such a fantastic and thoughtful present. “All my friends are getting them, and I thought you were cool,” he said. Shots fired. Then he upped the ante and lobbed another grenade directly at me: “You’re the strictest mom I know.”

Okay, first of all, I am cool; my middle part and socks with Crocs confirm that. And you can’t get any cooler than Elton John. So, mic drop. But if he was referring to “cool,” as in letting him call all the shots, then no, I’m not a cool mom; I’m a regular mom. Or, depending on your interpretation, maybe even a strict one.

His comment was meant to insult and encourage me to lighten up. In his mind, strictness has negative connotations of having an abundance of rules and regulations. If “strict” is limiting screen time, monitoring electronics, encouraging healthy eating, and insisting on inquiring if the home has accessible weapons at playdates, then yes, I am strict and proud of it. But what he doesn’t see or understand is that these limits are there for his protection. My job as a parent is to provide emotional and physical security to my children, which sometimes entails having boundaries in potentially dangerous areas, like exposure to the internet and technology.

READ:  Your Kid May Need Two Flu Shots This Year, Says The AAP — How To Tell

So his comment backfired. I secretly high-fived myself because it served as confirmation that I was doing what I needed to, and I will wear that title like a badge of honor. In fact, because I am a woman of enormous (read: zero) musical talent, I might even write a song about it and perform it as a special surprise at his birthday party.

It seems the fact that we have established boundaries and limits at all is frustrating to him. As part of typical adolescent development, he is exploring life and pushing these boundaries is part of the natural process of growing up. He is allowed to express his displeasure at our boundaries, but that will not change them.

Being too permissive has obvious cons, but I’m also aware that being overly rigid or unyielding and inflexible can be equally damaging and create rebellion. Striking that balance is the holy grail every parent strives for. I feel like our rules are well thought out, reasonable, and don’t go overboard. I try to give my kids freedom and let them make their own decisions whenever it’s appropriate, but I do prioritize their health and safety over them “liking” me and thinking I’m their buddy or the “coolest” mom.

I know there are plenty of kids his age (or even younger) whose parents bought them phones and I am not judging them for that choice. In fact, I’m not here to judge any choice other parents have made. My son’s tactic of comparing me to his friends’ parents was ineffective because I don’t give one single solitary French fry if a classmates’ parents allow something that I don’t, because they’re doing what they feel is best for their kids and I’m using my discretion to make decisions on what I feel is best for mine. Also, I am good friends with a lot of his friends’ moms. And we talk. A lot. So, I went ahead and did a little fact checking and discovered that his statement about all his classmates having phones is false. Yes, a few of them do, but the majority still do not.

READ:  Every Jennifer Lopez Wedding Dress From Her Movies

The simple fact is, his dad and I think he lacks the maturity to handle such a monumental (and potentially hazardous) thing and I just can’t see anything good coming from it at this point. So I plan to hold firm for now. But of course, as the kids age and our circumstances change, the boundaries will continue to expand.

Am I going to make some mistakes along the way and at times be too “strict” or perhaps too lenient? Absolutely. But I’m also going to keep enforcing the boundaries that will keep my kids safe, happy, and healthy, even if that means they don’t like me for a while. No amount of digs about my “strict” parenting or whining will change things. So sorry kids (not sorry at all). You can thank me later.

Christina Crawford is a Dallas-based writer, guacamole enthusiast, and mom to three feral little boys. She spends her days putting out fires (actual and metaphorical) and trying to keep goldfish alive. Her words have appeared in Newsweek, HuffPost, Health Magazine, Parents, Scary Mommy, Today Show Parents, and more. You can follow along on Twitter where she writes (questionably) funny anecdotes about her life at @Xtina_Crawford