With Roe v. Wade being overturned, bodily autonomy is under attack from all directions — and that could include the future legality of fertility treatments. 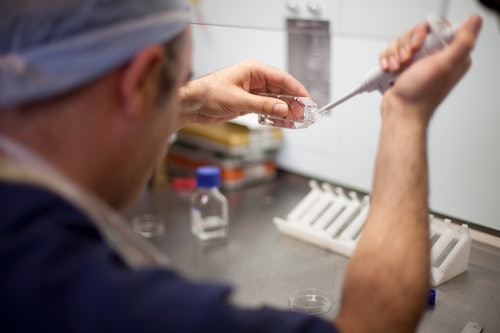 In the aftermath of the Supreme Court’s recent decision to overturn Roe v. Wade, patients in states across the country are now left with valid questions and concerns about their reproductive rights and autonomy moving forward. According to experts, the ripple effects of the ruling could impact so much beyond safe access to abortion, including birth control, care for miscarriages, and fertility treatments like in vitro fertilization (IVF).

Reproductive health advocates and patients alike in the states immediately impacted by the repeal of Roe v. Wade are now left wondering about the safety of all reproductive medicine, especially fertility treatments that require the use of assisted reproductive technology (ART). Though there hasn’t been any explicit change to state laws regarding family building procedures yet, the broad and imprecise language used in some states’ abortion bills could potentially include them, notes the Washington Post.

With the strictest bills defining life as beginning at conception and considering a fetus a person, treatment providers could face criminal charges for discarding embryos or for accidents such as the malfunction of embryo-storing freezers, as experts told CNN, with the rights of fertility patients left in the lurch as well. Here’s what we know so far.

Why IVF Could Be Targeted Under Trigger Laws

According to data published by the Centers for Disease Control and Prevention (CDC), roughly two in every 100 children born in the U.S. are conceived through IVF, a lab process that involves sperm fertilizing an egg. If successful, a healthy embryo is then transferred to a person’s uterus, hopefully setting the stage for a safe, healthy pregnancy.

But the nature of the IVF process often means that extra embryos might be produced, which is where the potential for criminalization comes into play should patients or providers decide to discard unused embryos — and it’s something that has been on the radar of reproductive health experts well before Roe was officially overturned by the Supreme Court on June 24.

“While fertility treatments haven't explicitly been the target of most anti-abortion laws, there's a large chance that they can and will be implicated in abortion bans as we see them come into effect across dozens of states,” says Stephanie Swartz, Favor’s Senior Director, Policy & Public Affairs. “The American College of Obstetricians and Gynecologists (ACOG) concurred in the aftermath of the ruling, sharing that the decision threatens access to reproductive technologies like IVF, as well as other forms of reproductive care.”

Dr. Anate Brauer, a reproductive endocrinologist and IVF director at Shady Grove Fertility in New York, agrees that there’s a lot of uncertainty right now. While she says legislators have stated that it’s not their goal to target fertility treatments, “The language in some of these bills and laws seem to leave the door open to [criminalization]. For example, there is language that goes to great length to define a conception as a pregnancy in the uterus. But then another definition says that abortion can’t be performed after fertilization, which is the union of a sperm and an egg.”

But doctors can’t detect that event in the body. “We can only detect a pregnancy 10-14 days after implantation in the uterus,” says Brauer. “However, fertilization occurs all the time in the IVF lab and the reality is that most fertilizations are abnormal, which means many embryos don’t develop or implant.” This leaves them to be discarded.

David Stern, the CEO of Boston IVF, one of the country’s biggest fertility networks, told Bloomberg, “We’re hearing a lot of concern and fear from patients.” The practice is currently working on a program to help patients who want to transfer embryos to Massachusetts in the event of bills in other states designed to target embryo destruction, which is a normal part of the IVF process.

If you are currently in the fertility planning process or think you might be in the future, there’s nothing to panic about just yet, as ASRM spokesperson Sean Tipton told Bloomberg. Any proposed bills will need to move through state legislatures before being passed into law, a process that will likely take months. Still, it’s of little comfort for patients who hope to expand their families with the use of fertility treatments in the coming months and years ahead, especially given that anti-abortion activists “are not in the mood to compromise,” as Tipton noted. “They are looking to slam that door shut as hard as they can. If infertility patients get their fingers stuck in that door, that’s perfectly OK with them.”

Your best point of contact with any questions or concerns is your OBGYN and/or fertility specialist, who can help you navigate the best options for you and your family and work with you to ensure you’re taken care of. IVF is just one of many options available to help patients conceive, including fertility drugs to regulate or stimulate ovulation and intrauterine insemination (IUI). “Egg freezing — as opposed to embryo freezing — is a viable alternative for those worried about how their fertility treatment access might be affected,” adds Swartz, noting that it’s unfortunately often cost-prohibitive, much like many fertility treatments can be.

You’ll also want to “stay informed from reliable sources, voice your concerns to your state representatives, and vote for representation that preserves your rights to build a family,” adds Brauer. “Demand clarity on these issues from your legislators.”

No matter what archaic-minded, misogynist lawmakers have to say on the matter, you have every right to choose what you do with your body in any context, but especially with regards to pregnancy. These are undoubtedly terrifyingly uncertain times, but health experts and reproductive care activists are doing everything they can to ensure bodily autonomy is protected in every way possible.