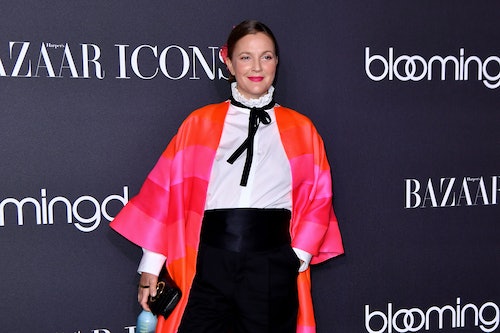 Taking a break from sex isn’t a big deal — or at least that is what Drew Barrymore thinks. The actress brought up the idea of abstinence while talking about Andrew Garfield’s method-acting levels of preparation for 2016’s Silence, during which the actor did not have sex for *gasp* six whole months.

"Well, I get abstaining from sex, I did that my entire 20s," Drew Barrymore Show contributor, Ross Matthews, quipped during the show's "Drew's News" segment. Barrymore agreed wholeheartedly, saying, "I was like, 'What’s wrong with me that six months doesn’t seem like a very long time?' I was like, 'Yeah, so?'" She and Matthews joked about six months sex-free not being a huge deal (because it isn’t!) and Barrymore upped the ante, adding, “Oh, years.”

To be clear, Barrymore gets that actors have to do what they gotta do to get in the mindset to play a character. When she was cast as Edie Beale in Grey Gardens, a real-life socialite whose reclusive lifestyle was highlighted in the 1975 documentary of the same name, she dabbled in method acting herself.

"There are lots of actors who have, Christian Bale, Jared Leto, Matthew McConaughey, you do want to transform and fully commit, so I understand that," Barrymore said of method acting, which has become more and more controversial. "I definitely on certain projects, like when I was doing Grey Gardens this film I did where I played this beloved real-life woman Edie Beale. I was so nervous I didn’t really chit chat with everybody on set, I just really stayed in character, or her,” she explained.

READ:  12 Virtual Museum Tours for Kids You Can Do Right This Second

Back in August, Garfield recounted his method acting tactics on an episode of Marc Maron’s podcast WTF With Marc Maron, and called his time without whoopi “an incredibly spiritual experience.”

“I did a bunch of spiritual practices every day. I created new rituals for myself. I was celibate for six months, and fasting a lot, because me and Adam [Driver] had to lose a bunch of weight anyway," Garfield said of his time preparing to play a 17th century priest. "There were all the spiritual practices we got to do while we were praying, meditating, having all the intentions we had as those characters. It was very cool, man. I had some pretty wild, trippy experiences from starving myself of sex and food for that period of time."

Barrymore didn’t recall any “wild or trippy” times during the sex-free periods of her life, but she did rightfully point out how wild it is that people make such a big deal about whether or not they are getting laid on the regular. Sometimes you just need a break from sex — whether it’s to prepare for a massive movie role, or for physical reasons or for mental health reasons.