Am I the only one who feels like an Uber driver, ATM machine and personal chef all in one? 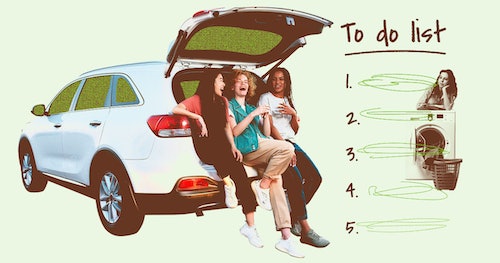 The slide in our relationship started subtly. Senior year of high school, conversations focused on dinner plans. Any of you with driving teenagers who also are involved in several activities at their school, who also have a good handful of friends, and who love “going for ice cream” 24/7 can understand that the family schedule becomes complicated, particularly when it comes to the family dinner. No complaints. I have always sucked at dinners anyway, but then I started paying attention to the pattern of texts I was getting each day. Was this the reason I couldn’t perform? “Mom — I might be home, might not…if I eat, it needs to be fast. And early. Or maybe late. xo…” or “I’ll be home for dinner, but then I’m joining so and so for a bite, so I don’t really need any food, but what are we having? Because if it’s good, I might have a little.xo”

By the start of summer, I decided this was all part of the pre-college child’s plan: I act as if I have one foot out the door because I kind of do. You don’t see me much now. This way, you’ll be ready for me to leave. The subtle shift in our communication became full-on business deals, with dinner plans just the tip of the iceberg. Each day I was directed (by my 18-year-old) about what her plan was, what she needed, and where the rest of the family did (or likely didn’t) fit in. Action plans involved food, laundry, maybe a follow-up Venmo request, and quick one-on-one scheduled catch-ups at times that I was usually ill-prepared for, but I would take what I could get. At one point, I thought my daughter was being efficient, proactive, and highly organized. She’s taking charge! She is ready for college!

Weeks later it dawned on me: my summer vacation had become the work of Uber driver, Amazon box recycler, and personal assistant all rolled into one. I even watered flowers for her when she was too busy to get it done herself, despite taking on the job in the first place. It dawned on me that my 50-plus-year-old response was always, “How high?” when my teenager told me to jump. I was no longer in charge of this household and I needed to get it back.

Cue the drama. It was just an ordinary request: “Can you drop this Zara package off at the post office? It might need a shipping label.” OK. I freaked out. With her brother nearby to overhear my rant (in case he had any bright ideas about trying this behavior out in a few years), I dramatically listed various examples of the ridiculousness of our communication, punctuating my point with: “ I AM TIRED OF HAVING A TRANSACTIONAL RELATIONSHIP WITH YOU. ENOUGH!” My intelligent, college bound daughter looked surprised. My son even glanced up from his phone. I breathed out. I’ve made an impact! She gets it! Maybe that was all I needed to do — take a dramatic stand and stop being such a pushover. After a pause, she interrupted my internal celebration and asked what that word even meant.

I’d like to say that after expressing my feelings and clearly stating what needed to change, we both pivoted and all was restored in the world of mother-daughter relationships. Nope, didn’t happen. In fact, it continued all summer, I suppose because it had too. At least this beast had a name. Knowing what it was helped me see that it was all part of the summer before college.

READ:  Genetic Testing Allowed Me To Stop ‘Blaming’ Myself For My Daughter’s Autism

Although I was mentally ready for her departure, I needed the whole summer wide open, with the idea that it would be OUR time: to prepare for her exit, to get the supplies she needed, and somewhere in there, to bond fiercely with her, give her every nugget of wisdom that might help her in the future, and to become emotionally ready to just let go. What I didn’t prepare for was the fact that she didn’t need me in that way, and my role in the college prep was, “assistant to the task master.” A demotion, but necessary.

Those final days before drop-off the only trace she left each day and night were the cast off outfits in a heap on the floor. Text messages ramped up. Plans were laid out to the minute. “I am doing this, then going here, then meeting up with so and so to say goodbye, and then I’ll be home for ten minutes before I go to a beach cookout because it’s the last time I will see so and so until Thanksgiving.” I jumped, I thumbed up, I bent like the flexible willow tree mother that I was.

Our final days together returned to actual, live conversations, a car packed to the brim, and hours together that had us weirdly reconnect just in time to say goodbye. When I hugged her in the parking lot, not for a minute was I thinking about a checklist, a text, a blue IKEA bag, or a second pair of bright white sneakers that looked exactly like the first. It was just my kid and me.

READ:  This Dual Vibrating Massager Is Sure To *Ahem* Please, And It’s Only $30

She’s been gone for over a month now, and I float through my days with a different rhythm in her absence. Still, something tells me transactions are going to be a part of our relationship forever. When she buys her first car? Looks for her first apartment? Gets married? Oh dear god, when I watch over her precious children and my SACRED grandchildren? I can only imagine the notes, the lists, the to-dos.

Now she calls me occasionally, just to chat, on her walk to class. It’s not a text, a Venmo request, or a favor to please send something to her. It’s only to tell me about her morning, the funny thing that happened, or the professor she likes the most. We just talk. It's back to the communication exchange, less so the business transaction. For now, I’ll take it.

Sydney Lee is a mom of two teenagers and always has one or two dogs by her side. She loves ripped jeans and flip flops, and she is trying to come to terms with life’s punches without losing her mind or her sense of humor.