We’ll admit: 4th of July sparklers can be a little — er — controversial. It shouldn’t be a surprise that most doctors and fire experts don’t recommend sparklers for kids. But raise your hand if you played with sparklers when you were young! Most of us have fond memories of twirling them like magic wands, […]

The post Celebrate 4th of July With These Fiery Sparklers (Plus Some Safer, Kid-Friendly Alternatives) appeared first on Scary Mommy.

We’ll admit: 4th of July sparklers can be a little — er — controversial. It shouldn’t be a surprise that most doctors and fire experts don’t recommend sparklers for kids. But raise your hand if you played with sparklers when you were young! Most of us have fond memories of twirling them like magic wands, skipping around picnic tables covered in red white and blue treats, and wearing a patriotic outfit for the occasion. Whether or not you feel comfortable giving your children sparklers for 4th of July is ultimately up to you, but we spoke with a few experts to get their recommendations for festive fun, as well as what they suggest as a safer alternative to sparklers.

Related: Your Backyard Will Need These Inflatable Water Slides This Summer

As you know, sparklers are those metal sticks you light on fire, so how could they possibly be dangerous? In all seriousness, though, sparklers are ultimately a ball of fire that’s a little bit unwieldy, so it’s incredibly important to handle them carefully. Jeffrey Litt, DO FACS and Medical Director of the Burn and Wound Program at MU Health Care, knows how dangerous these sparklers can be. “They can burn over 1,000 degrees, which can cause instantaneous third-degree burns,” he says. “Have I allowed my kids to use them, in spite of that? Yes, but I’m extraordinarily vigilant (can’t have the burn surgeons’ kids get burns, after all!).” He recommends that anyone who uses them — adult, kid, or otherwise — be very aware of how best to safely handle them and know how to extinguish the fire should you need to.

Dennis Heon, MD, trauma liaison for pediatric emergency medicine, Ronald O. Perelman Department of Emergency Medicine at NYU Langone Health, points out that not only do you need to worry about the fire spouting off the end of the stick, but actually the stick itself; your risk of eye injury is actually pretty present. “Eye injuries also are common because sparklers are often waved around and held up at eye-height to see the display,” he notes. And though he says that injuries from sparklers aren’t super common, that doesn’t mean they’re a safe toy to play with for 4th of July or any holiday.

“If [parents are] going to use them, hold them below your shoulders where your body is more protected,” Dr. Heon advises. “It’s also very important to be aware of your immediate surroundings and ensure no one is within a spinning radius around you.” Taking care of your surroundings — and making sure there’s nothing flammable nearby — is another great tip if you decide to use sparklers. Consider having a fire extinguisher or fire extinguishing aerosol spray nearby. And of course, they are best used outside only.

In the end, though, sparklers are probably best left for the adults (and at the very least, older kids who can use them responsibly), but that doesn’t mean your little ones can’t still have fun. John D’Alessandro, Spokesperson and Secretary of the Firemen’s Association of the State of New York, suggests people of all ages find their local fireworks show and simply sit down and enjoy watching the show, instead. “We don’t believe the risk is worth the reward and encourage everyone to celebrate responsibly and go see a professional show,” he said of using sparklers at home.

With all that said, if you feel comfortable safely using sparklers at home, we picked out a few options you can choose from, as well as a couple of safer ways for kids to enjoy the lights. So, let’s get patriotic with the sparkler (and sparkler alternatives) we picked out ahead.

If you just want a small pack of sparklers, grab this set from Walmart. They’re incredibly cheap, which means they’re very accessible. These sticks are 7 inches long and are best handled by adults, as small hands may not be nimble enough to safely handle a metal sparkler stick.

For a larger gathering — or for someone who just wants a lot of sparklers for the summer holiday — Walmart has this pack of Wholesale Sparklers Gold Party Sparklers that includes 6 boxes of 12. Again, these are short sticks, so your best bet is to only let adults handle them while they’re lit and only let kids observe. These ones are made to put off a golden glow, which will look so pretty during the twilight hours!

These KLM2 Morning Glory Sparklers are much longer than the average sparkler, which makes them a little less precarious for smaller hands. While still not ideal for children, young adults can get in on the action with these. This pack comes with 144 sparklers, which adds up to endless fun for the whole party.

If your party is in need of some color, these KLM2 #10 Assorted Colored Sparklers will give you a variety of illuminated shades. In a pack of 96, the sparklers light up in red, yellow, and green for all kinds of fun. With sparklers like these, you and other parents can (carefully!) show all the colors to the kids while they watch from a distance. The red is especially patriotic!

These Enterprise Solutions Gold Party Sparklers are multifunctional and can be used for any occasion. Pull them out for 4th of July for some golden light when the sun goes down. The sticks are short and metal, so they’re best used by sober and cautious adult hands! They come in a pack of 72, so there’s plenty of spark to go around. 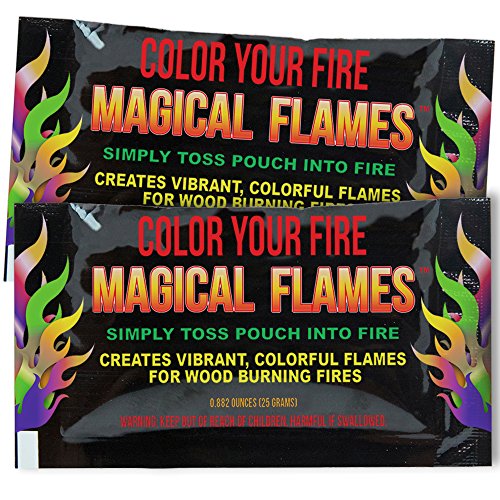 If you’re interested in a safer alternative to sparklers and plan on lighting the fire pit, these Magical Flames Color Your Fire pouches will do the trick. All you have to do is have an adult toss an unopened packet into a fire, and the flames will start burning in a rainbow of colors.

READ:  These Cozy Starbucks® Coffee Flavors Are the Essence of Fall 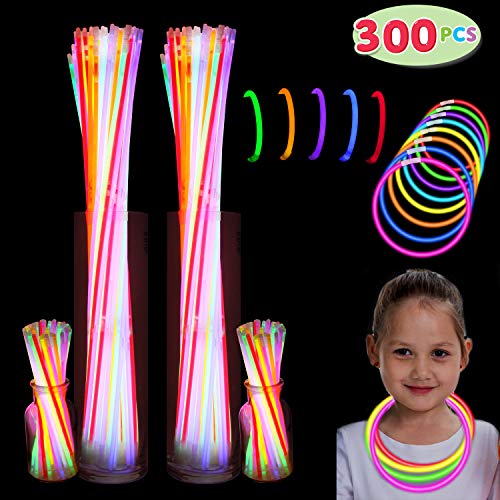 Have younger kids that insist on participating? One of the safest options for your littles is a glow stick. With this pack of Joyin Glow Sticks, you’ll have a ton of colors for them to choose from. Have an adult crack them open so they light up, and let your kiddos wear them, twirl them around, and do anything else they can to light up the night. (Safety bonus: It also makes your kid visible if you’re walking to a fireworks show in the dark.) Your kids will have so much fun with these, they’ll forget all about those flame-spewing sparklers. 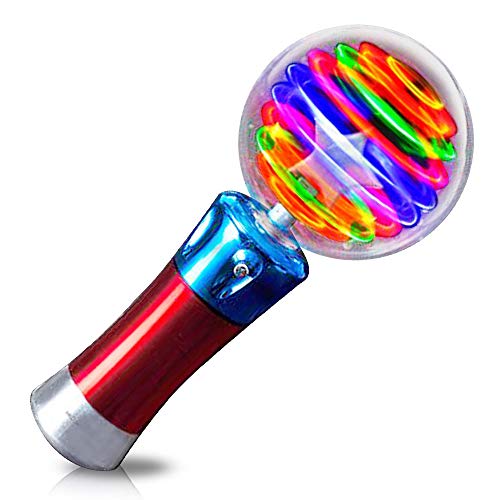 With its colorful spinning lights, this bright flashlight gives a similar effect to waving a sparkler in the air — without the burn risk. This one’s safe for children as young as 3 (with supervision, of course), so even your tot can get in on the fun! 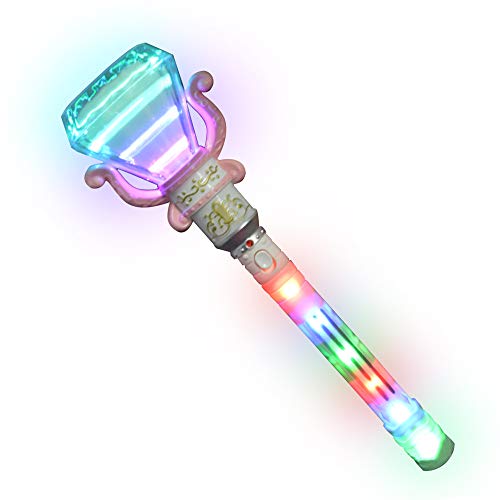 How about a royal scepter for your prince or princess? Its multi-hued glow will add an extra dose of magic to the night. This pick is highly-reviewed and will be used for dress-up games even after the holiday is over. 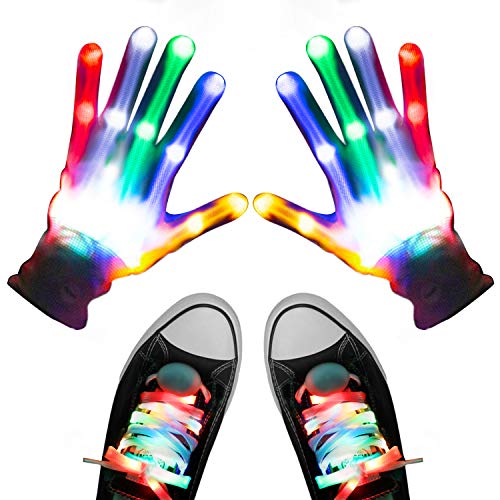 Baby, you’re a firework! Kids can wear these illuminating gloves and laces, then run, spin, jump, and hop to their heart’s content, with no risk of accidental burns. They make awesome Halloween accessories, too!

Extra 5% off with site coupon

The post Celebrate 4th of July With These Fiery Sparklers (Plus Some Safer, Kid-Friendly Alternatives) appeared first on Scary Mommy.