The ‘All About That Bass’ singer opened up to Romper about how motherhood has impacted her career and why women are so damn strong. 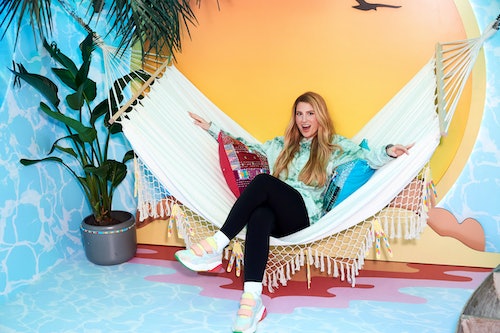 When talking about Meghan Trainor, there’s something that always has to be addressed first: her side-by-side his and her toilets for her and husband Daryl Sabara. In Romper’s new cover story, Trainor delves into what exactly drove the bathroom remodeling decision, and talks the very relatable trials and tribulations of motherhood she’s faced raising her 2-year-old son Riley.

So about them toilets: Trainor is not ashamed, and no amount of confused feedback on social media will convince her otherwise.

“F-ck it,” she said. “It’s still awesome. I love it, and I’m proud of it,” explaining that the reason she and Sabara doubled up on porcelain was because she was tired of waiting her turn to pee during middle-of-the-night feeding shifts for Riley as an infant. Her contractor was a little confused at the request, but Trainor says it’s still her “favorite part of the house.” The couple has only attempted to sync their BMs once — something that Trainor is not eager to revisit, saying that her husband is “a smelly boy.”

Keeping on top of everything as the mom of a toddler who happens to have a new album coming out in October can definitely be trying, though, which is why Trainor leans on fellow celeb mom friends like Hillary Duff and Ashley Tisdale when she is in a rough spot: “I got lucky. All the moms in our group are so cool,” she explained. “The other day I texted them like, ‘My butt is acting up,’ and someone sent me their butt doctor — literally saved my ass. I was just with Hailey Beiber and was like, ‘The best thing you can do when you have a baby is find a group of moms and join them.’ It’s our lifelines.”

Her friends and family also helped out during a tough pregnancy with Riley, during which Trainor experienced eczema on her face. “My face was breaking out with a dermatitis, so it was like eczema all around my mouth. I had gestational diabetes, so I had to test my blood all day long. I was over it,” she recalled of her pregnancy.

She ultimately had to have an unplanned C-section to deliver Riley, who was in breech. Unlike her “psychopath” friend Duff, Trainor was all about the medication through the tough delivery. After some complications, she and Sabara were able to bring Riley home. And as she watches her son quickly grow up, Trainor can’t help but get a little teary.

“All the wives, all these mamas, you can’t cry, you can’t be like ‘Today was f*cking tough,’” she said. “Nope, you have to be like, ‘Everything’s perfect; we’re all perfect and happy.’ And it’s not easy.” She doesn’t know why we suffer more than dads in this department, but she is sure of one thing: “Women are just stronger and smarter. We make life, you know what I mean?”

Every mom knows what you mean, Meghan. Check out the entire interview over on Romper.