The public is overwhelmingly demanding gun control in the wake of the country’s 212th mass shooting of 2022. 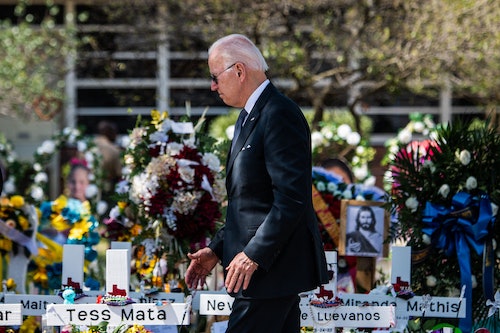 On Sunday, President Joe Biden and First Lady Jill Biden arrived in Uvalde, Texas, to meet with the families of the victims of the Robb Elementary school shooting that took the lives of 19 children and two educators.

The two met also met with survivors and attended a three-hour memorial for the victims of the attack.

As President Biden and his wife exited Sacred Heart Catholic Church after attending a mass for the victims, they were met with the chants of gun control advocates: “Do something!”

“We will!” replied President Biden as he got into his car.

A few hours later, the president echoed his promise on Twitter, saying, “To everyone impacted by the horrific elementary school shooting in Uvalde, Texas: We grieve with you. We pray with you. We stand with you. And we’re committed to turning this pain into action.”

Unfortunately, it’s not that easy. If history has taught us anything, it’s that if reform isn’t put into motion in the immediate aftermath of a mass shooting, the momentum fades and any chance of reform withers.

The Executive Branch — aka the president — also has limited power when it comes to passing sweeping firearm reform on its own.

"A lot of the powers the president has deals with the extent to which and how he enforces existing laws rather than creating new laws and regulations," legal analyst Dan Eaten told CBS 8.

This means that while President Biden can have something that already exists, like background checks, operate in a different way, but he cannot create new laws.

READ:  Conquer The Lunchbox Blues With These 5 Fun Lunches That Are A Breeze To Pack

That is where the Legislative Branch — aka the House of Representatives and the Senate — come into play.

This is why state and city-level elections are so critical: even with a president who is fighting for gun control, it cannot be done without progressive legislators to write and pass the bills for the president to approve.

"I think things have gotten so bad that everybody's getting more rational about it. At least that's my hope and prayer," President Biden told reporters at the White House on Monday, adding that he did not believe that the second amendment was “absolute.”

"There's the Constitution. I can't dictate this stuff. I can do the things I've done, and any executive action I can take I'll continue to take. But I can't outlaw a weapon, I can't change the background checks. I can't do that," he said.

As far as direct action regarding Robb Elementary, the U.S. Department of Justice announced it will be conducting a critical incident review of the Uvalde Police Department response to the shooting.

The police department ultimately waited 78 minutes before taking out the active shooter. Children screamed for help and called 911 from inside the classroom as police seemingly waited for direction.

The police department’s choice to wait goes against federal and state guidelines set in place after the 1999 Columbine shooting in Colorado.

There have been at least 11 mass shootings with four victims since the Uvalde, Texas shooting.