Whether another academic year fills you with excitement or dread, the world of cinema offers an array of back-to-school movies to curb your nerves. 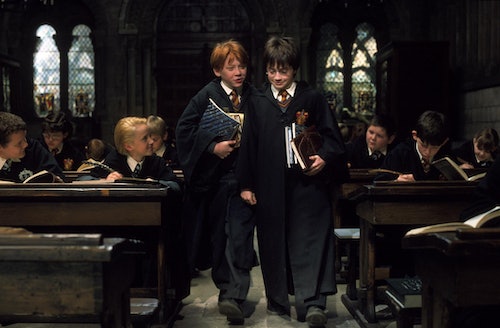 Hot summer days are still in full swing, but it won’t be long until it’s time for kids to head back to school. And while the looming threat of homework, tests, and chillier temperatures may not sound all that appealing to some, there are definitely a few significant advantages that come with the return to those hallowed halls. (After all, there are a lot worse things that could happen than getting to spend time with your friends every day — even if it’s inside a classroom!) But whether the thought of another academic year fills you with excitement or dread, the wonderful world of cinema offers a vast array of back-to-school movies that can make the whole ordeal seem a lot less scary. Because, believe it or not, kids really can have fun in school — both on and off-screen.

From the highs and lows of teenage romance to the struggles of fitting in (or, better yet, embracing the joy of not fitting in), these films are chock-full of school-centric shenanigans that prove just why so many people believe these are the best years of your life. The memories you make in school can stay with you forever — as will the memories you share with your family as you gather around the living room together and watch these must-see back-to-school gems.

If there’s one person who can make the idea of school sound not just tolerable but downright enjoyable, it’s Jack Black. The actor takes on the role of Dewey Finn, a down-on-his-luck guitar player who decides to pose as a substitute teacher at a private school and turn his classroom into a full-fledged rock band. Full of heart and laughter, this movie will have you embracing your inner rock star by the time the credits roll.

What kid in the ‘90s didn’t try to move random objects with their mind after seeing this film? (That’s a rhetorical question, of course, because the answer is no one.) Adapted from the book of Roald Dahl, Matilda centers around a young girl who possesses telekinetic powers and how she uses them to thwart the evil people in her world, including her parents and the formidable school principal, Agatha Trunchbull. It’s a great reminder of how good can triumph over evil and that anything is possible when you have friends by your side.

Sure, this franchise takes place in a purely fictitious, magical realm, but despite all of that, it can also feel extremely relatable, even to us mere Muggles. Harry Potter may be a celebrity in the wizarding world, but he’s also, in many ways, a misfit. Throughout his entire schooling, Harry grappled with what it means to be different from the rest of his peers, which made him feel very lonely at times — something that many kids (and even adults) are sure to relate to. Magical or not, society dictates a need to “fit in” and be just like everyone else. This film reminds us to celebrate being different, both in and out of the classroom.

For those who prefer catchy tunes and fun dance numbers to go with their family movie night, High School Musical has everything you could hope for. Young love, school sports, musical hijinks — this film has it all and then some. You’ll find yourself bopping along to the catchy lyrics and remembering in disbelief how young Zac Efron looked.

READ:  A Simple, Social Summer For Kids Is Just What The Doctor Ordered––Literally

Feeling embarrassed at school is basically like a rite of passage, but having your secret love letters sent to their unsuspecting recipients is a whole new level of cringe. Yet that’s precisely what Lara Jean (Lana Condor) is forced to grapple with when her inner-most desires become public knowledge. It’s a nightmare scenario you wouldn’t wish on your worst enemy, yet Lara Jean soon comes to realize that it might, in fact, end up being the best thing that ever happened to her. But hey, that’s high school for you — you never know what to expect.

Good Choices for the Going Into High School Crowd

R-rated Options for the Grownups — Or Mature High Schoolers

READ:  What’s In Store For Jen & Judy? Everything To Know About ‘Dead To Me’ Season 3