Every parent wants their kid to be cool — as in full of confidence, sense of self, and their own distinctive style. These cool baby girl names reflect that. 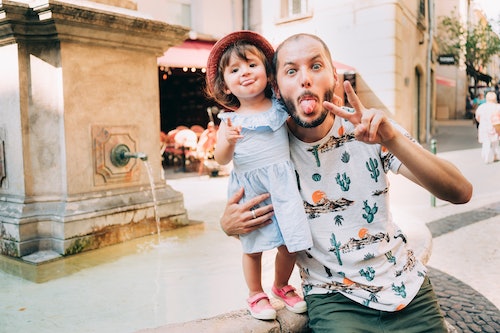 Let's be honest: Everyone wants their babies to grow up to be the cool kids. Not in a superficial way, but in the sense that parents want their kids to feel confident, be inspiring, and have their own personal aesthetic that just sort of makes them stand out from the crowd. It makes sense then that when you're trying to figure out what you want to call your future individualist, cool girl names are at the top of your list.

So, what makes a cool baby girl name? It goes without saying that cool is a very subjective thing. Ultimately, it comes down to what feels cool to you. But, generally speaking, a cool baby girl name just has that vibe. It's softly feminine yet confidently fierce like Tessa or Cleo. Or it can subvert gender boundaries and rock its tender toughness like Fallon or Tobi. Cool baby girl names can also be traditional and embrace that timeless vintage essence — think Ava or Maude. Of course, this type of name can also be beautifully bohemian, like Jade and River.

If you're considering a cool baby girl name for your new bundle of joy, peruse the list below and see which one stands out and feels "cool" for your baby.

Meaning “dawn,” this romantic name also refers to the stunning and mystical “aurora borealis” — making it all sorts of commanding and cool.

This name has continued to be popular and trendy for a reason. From Ava Gardner to Ava Phillippe, this gorgeous moniker that means “birdlike” and “lively” definitely has legs.

Is there anyone cooler than Blake Lively? Not really. This gender-neutral name means both “dark” and “bright,” which makes it an interesting, cool choice for a kid with a “yin-yang” energy.

This cute name means “glory” and “pride” and is destined for the cool girl who will be number one in your life.

A pretty French name that oozes femininity and grace (it means “she” en francais), this is a fabulous pick for a pretty cool girl.

If you like last names for first names and girl names with an edge, this name’s for you. It means “leader,” and is perfect for your little babe who will surely be the leader of the pack.

Another gorgeous gender-neutral name, Harlow means “army hill” and is sure to instill strength and confidence in your badass baby girl.

There’s a lot to love about this cool name. First, its meaning — “battle” — gives it a fierce undercurrent. If you’re a Harry Potter fan, you’ll love that it’s a diminutive form of Hedwig. And, finally, it’s the name of iconic Austrian-born American film actor and scientist Hedy Lamarr.

This also happens to be the name of Blake Lively and Ryan Reynolds’ second child, so automatically this is a cool name (yes, Blake gets a second mention on the list). It’s also Spanish in origin and means “pure” and “holy,” which is perfect for your cool little angel.

This powerful name is derived from the precious stone jade, which is known as the “stone of the side.” Jade transmits wisdom and courage, which is exactly what you want for your awesome girl.

READ:  There’s A New Treatment For Cellulite – Here’s What You Need To Know

Meaning “youthful; soft, downy,” Jules may not be ubiquitous in the U.S., but it’s in the Top 10 baby names in France. The gender-neutral name is shared by many notable creatives, including cartoonist Jules Feiffer, opera composer Jules Massenet, painter Jules Olitski, and author Jules Verne. And, of course, there’s a very cool character in the cult classic Pulp Fiction who goes by Jules.

This sweet-yet-strong name means “little dark one,” which gives this feminine name an interesting edge that is sure to help your little one stand out. P.S. Keira Knightley, anyone?

Chrissy Teigen and John Legend chose this lovely name, which means “moon,” for their daughter. It’s a cute and mystical name for the little girl determined to reach the sky.

Maude Apatow has definitely upped the cool factor to this traditional name! It means “powerful battler” and is the epitome of a strong, confident leader. In other words, it’s hands-down cool.

This might slightly be a made-up name but you’ve got to admit — it sounds pretty cool. It has that bohemian-plus-traditional feel to it and will no doubt help your little one stand out.

Quinn is another gender-neutral name that’s also a last name. It’s a short and sweet moniker for your little cool one that means “wise.”

A boho name that’s strong and feminine yet flowy — just like its namesake, a body of flowing water. Kelly Clarkson named her daughter River Rose, which raised its notoriety and coolness factor.

READ:  We Shouldn’t Be THIS Surprised At A Representation Of A Black Fetus

Most people associate this name with the Massachusetts town of the same name where the infamous witch trials took place in the late 1600s. Its meaning is actually far more innocuous, albeit ironic: “safe.”

Scarlett Johansson is probably one of the coolest women on the planet and, just like the actress, this name is strong, feminine, and unique. A French name that means “red,” it definitely denotes passion and mystery.

A sweet and strong name that means “raider” or “warrior,” Sloane instantly has a cool quotient that will help your baby stand out.

This feminine name of Greek origin means “to reap and gather.” And while it originally came from the name Theresa, this shorter former is obviously the cooler choice.

Although the meaning of this name is demure (“God is good), there’s no denying that Tobi sounds like the name of a girl who takes no BS and marches to the beat of her own drum.

This cute name means “soft and smooth” as well as “holy peacemaking, gentle friend,” which all seem like lovely attributes. While this name can be a pet name of longer names like Winifred or Gwendolyn, it’s definitely cool enough to stand on its own — Jimmy Fallon and wife Nancy chose it for one of their daughters. And what ‘80s/’90s kid could forget cool girl Winnie Cooper from The Wonder Years?