Don’t sleep on inflatable games! Sure, tricked-out pool floaties are having a moment, but inflatables are so much more than those alone. There are inflatable water slides, inflatable toys, an actual inflatable pool sofa for goodness sake, a freaking inflatable castle with its own pool, and an array of inflatable games guaranteed to pump up […]

Don’t sleep on inflatable games! Sure, tricked-out pool floaties are having a moment, but inflatables are so much more than those alone. There are inflatable water slides, inflatable toys, an actual inflatable pool sofa for goodness sake, a freaking inflatable castle with its own pool, and an array of inflatable games guaranteed to pump up your summer fun. (See what we did there?) From pool activities to yard games, from sports to strategy, these are the inflatable games you need for family events, birthday parties, and just plain fun in the sun. 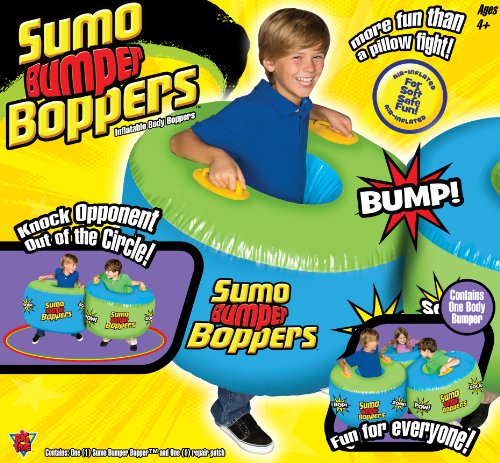 Birthday party slam dunk! This inflatable game is basically sumo wrestling meets pillow fight: It’s soft and safe to protect kids as they bounce around, get silly, and burn off energy so they flippin’ sleep tonight, dang it. Each kit contains one body bumper and one repair patch (because, obviously). Recommended for kids age 4 and up. 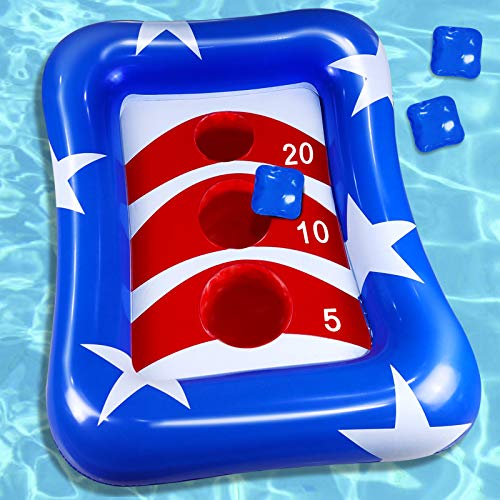 This American flag-printed inflatable game is extra perfect for that July 4th party — but it’s a winner any time. Iconic cornhole gets a pool-friendly update with this floating inflatable game, a full three feet tall. Score by getting your water-filled beanbag into one of three  pockets. Just move the game closer or further from the players to tweak the difficulty level. 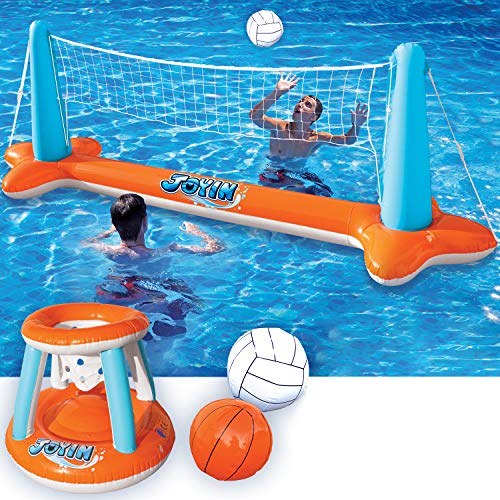 Can’t decide which family game you want? Looking for options for a large group or a birthday party? You’re in luck: This set won’t make you choose. It comes with an inflatable volleyball court with two weight bags, plus inflatable basketball hoops. Of course, balls are included for both games. More than 3,300 reviewers make this a top-rated, bestselling pick. 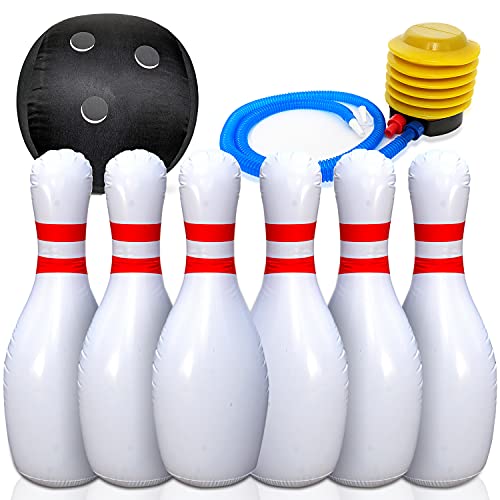 This bestselling game makes everyone feel like a pro: The oversized pins are kiiiinda hard to miss. Play outdoors or inside (preferably if you don’t have too many breakables on display). This set is made of durable PVC that should last you for seasons to come. It includes six 28-inch-tall pins and a ball, plus a pump to inflate them. 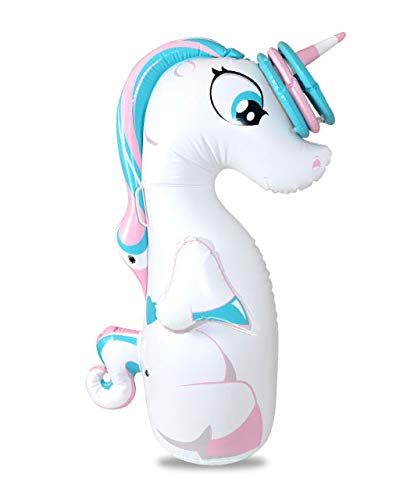 Put a 4-foot-tall unicorn in the yard and you’ve got the makings of a crowd-pleasing activity for the little-kid set right off the bat. This PVC creature bounces back after kiddo kicks and punches thanks to a sand-filled base. It comes with three inflatable rings for ring-toss action on the unicorn’s horn. Oh, and handles on its back allow it to double as a ride-on toy. Party decoration! Game! Toy! That’s a solid summer trifecta right there. 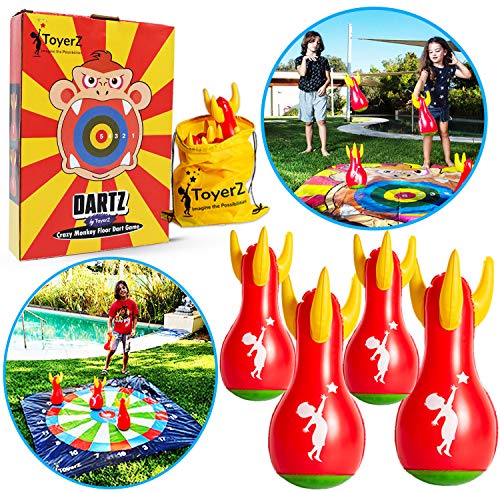 Darts… but make it inflatable! Blow up the four included darts and try your target practice using the 48-inch square mat. It’s double sided; one side is a kid-friendly monkey, and the other looks more like the traditional style of target. Four pegs secure the mat to the lawn. Hours of family fun, and no one gets stabbed. You’ll also get a carrying bag so you can take this one on the go easily. 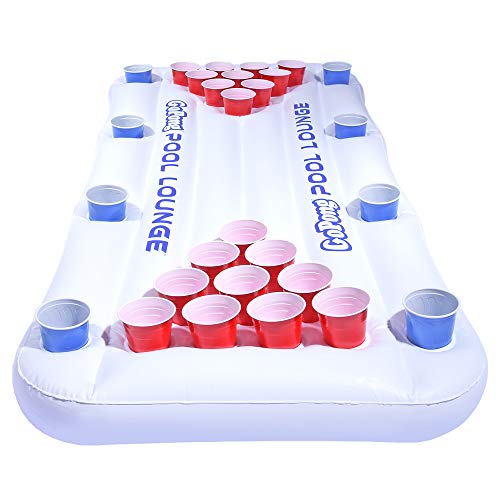 OK, so this one’s probably a better inflatable game for a girls’ weekend or the after-hours set. (But why should the kids get to have all the fun, anyway)? This 6-foot floating beer pong table has sideline cup holders, six pong balls, and four tethering grommets. Get set for a rousing drinking game… or just use it as a floating lounge. More than 2,000 reviewers give it a near-perfect rating. 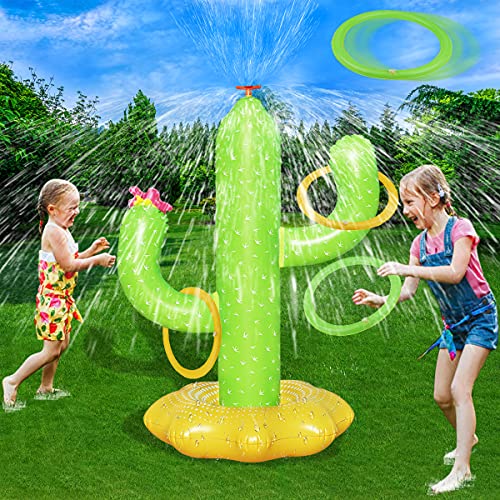 This three-foot cactus is right on trend: brightly colored, fun, and fabulous… like if Coachella were an inflatable game. Fill it up with air, install the water inlet connector to the sprinkler, and connect it to the garden hose for a baller cool-down solution on a hot day. You can even control the water pressure to adjust the spray width. Toss the four inflatable rings on the cactus arms for a fun party game. Made of eco-friendly PVC plastic, this comes with a vinyl plastic repair kit, water pipe connector, and two hose clamps. 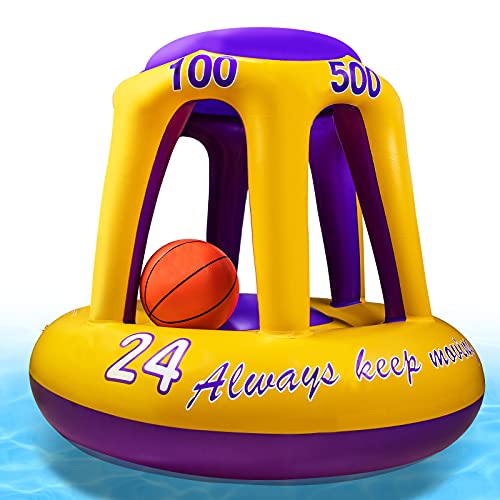 Kobe! Naturally, that’s what you have to shout when you score using this purple and gold inflatable basketball game emblazoned with the number 24. We’re going to guess this isn’t exactly official licensed NBA merchandise, but it’s a ton of fun (and solid exercise) no matter what. The family-size hoop comes with a 10-inch ball and has six different scoring sections.

What mom doesn’t love an opportunity to multitask? Much respect to this inflatable ring toss cooler, which — like Mom — does it all. At a party, it keeps drinks cool and doubles as a ring toss party game. Fill the large inflatable barrel-looking bucket with ice and drinks — it holds about 60 12-ounce cans — and then test your toss skills as you get, well, tossed.