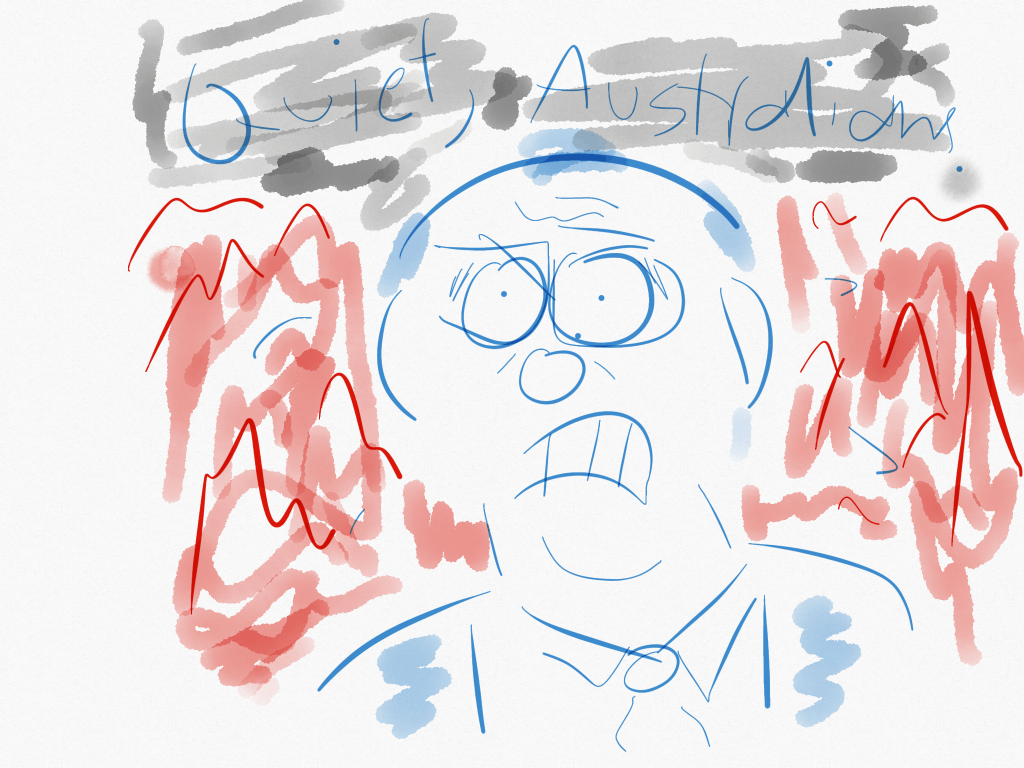 Andrew P Street describes himself as ‘an author, journalist, columnist and failed indie rock star.’ He puts together a very readable two/three-times-a-week Australian politics newsletter. You can find how to subscribe on Patreon; Tasmanian Times encourages readers to vote with their wallets to support quality independent journalism.

Andrew has generously allowed TT to reproduce this excoriating piece that sums up everything that’s going wrong with Scott Morrison’s tenure as PM. And there’s a lot…

Sometimes it’s worth just taking a step back from the busy little details of whatever scandal/s are engulfing the Morrison government on any particular day and look at the big picture, and to say the thing which other writers seem incapable of articulating.

To be fair, Australians are at their quietest when they can’t catch their breath.

I take no pleasure in saying this because the last few months have been an ongoing hour-by-hour reminder of how much Australians are suffering and what our nation has already lost, perhaps forever.

People have lost their lives, many more have lost their homes and livelihoods. Many towns are never going to come back from this, and we’ve almost certainly had a wave of extinctions as species corralled into smaller and smaller populations thanks to indifferent environmental policy and non-existent compliance policing are wiped off the face of the Earth.

Having smoke billow in from Kangaroo Island didn’t just terrify me, it put my baby son in hospital with breathing difficulties. This is an existential crisis with very material consequences. And I had it far, far better than literally millions of my fellow Australians.

And when I say Morrison is a bad PM I don’t simply mean that I don’t like the guy, which I don’t – his cruelty as Immigration Minister and his anti-LGBTIQ+ horseshit during the same sex marriage non-binding postal survey made clear exactly what sort of a person he is.

This kind of person:

Nah, just grab at that woman regardless. You know, like a gentleman.

I mean that he is a bad PM in that he has failed at the most basic requirements of the job, as well as the most complex and vital ones. Much of the job of being a PM is wrangling your government’s optics, and he’s not even managed that by today’s much-reduced standards.

Similarly, he’d have stood Bridget McKenzie down when #sportrorts began, rather than kept declaring that shameless pork barrelling was totes within the rules as though journalists weren’t going to then go through every electorate with a forensic comb to reveal just how complicit the entire government was with the scheme. PM included. After all, making her a scapegoat gets harder when every Coalition MP is also loudly bleating and butting at things.

And not only can’t Scotty handle simple PR, despite his background being literally From Marketing: he can’t do the actual job he backstabbed his way to.

Someone who took their national responsibilities seriously would have listened to advice about the coming fire season and taken action – hell, Labor and the Greens both took bushfire strategies to the election, so it clearly wasn’t a secret a year ago that the 2019-20 summer was shaping up to be a catastrophic horror show.

Nor would they have nicked off on a holiday to Hawaii when, and I can’t emphasise this enough, the fires had already started, with orders to his office to angrily deny where he was, despite merrily throwing shakas on some cretin’s Instagram. That’s not incompetence, that’s neglect which borders on the criminal.

And look, some of it isn’t his fault.

The government paid $190k for an “empathy consultant”. This is what we got for it.

The entire philosophy of the Liberal Party is that government should impinge on the lives of individuals as little as possible, making room for private enterprise to flourish, and an inevitable part of fulfilling that mandate is making sure government works badly.

There’s absolutely no fundamental reason why Centrelink should be such a nightmare to deal with, or for Newstart to be frozen at sub-poverty levels, or for the NBN to be a complete cost-blowout low-speed nightmare, or for the NDIS to be turned into a game of bureaucratic whack-a-mole, or for environmental policy to be filled with mining-related exemptions, or for the Murray-Darling plan to be an unworkable mess, or for transparency of government to be downright opaque.

These are all deliberate choices, and they are choices which this government has made under its several leaders over the last seven years. And Abbott was a sincere zealot who ran government as though it was in opposition and Turnbull was a flawed tech-idealist hamstrung by the sloppy compromises he made to seize power, but ScottyFromMarketing is the perfect Liberal PM for 2020: a leader that seeks to outsource leadership.

And let me be clear: Labor have messed up while in government, but when that happens it tends to be through overreach or attempting to do something too quickly (for example, the roof insulation debacle).

That’s because they have a different philosophy: that there are things of which only government is capable and that it has a vital role in the lives of all Australians. It doesn’t necessarily fulfil that promise, at least all the time, but there’s a reason why Labor governments tend to create things (the NBN, the NDIS, Medicare, the Green Bank, the “Carbon Tax”) and Coalition governments tend to destroy stuff.

That makes a difference, because when you have the ideal in mind that government should always do as little as possible then you’re perfectly poised to have The Morrison Epoch: inept, uncurious, deliberately ignoring genuine threats to the population while inventing fake ones (to this day no-one, and I mean no-one, has given me a clear explanation as to what problem the Religious Freedom Bill is seeking to solve).

And when you have leaders that don’t lead and governments who hate government, what sort of stuff happens down the chain?

You might get Sussan Ley using her travel expenses to inspect investment properties, and Michaelia Cash’s office leaking federal police raids to the media without consequence, and Angus Taylor-related companies profiting from bizarre water deals brokered by Barnaby Joyce, and Stuart Robert charging thousands a month for his home internet without oversight, and Barnaby Joyce keeping his job despite being not-exonerated from allegations of sexual harassment and running up $800k+ in expenses as “Special Envoy for the Drought” despite producing absolutely nothing, and ex-treasurer Joe Hockey funnelling fat diplomatic travel contracts to a private company owned by the Liberal Party’s federal treasurer, and Craig Kelly pushing conspiracy theories on behalf of the government, and George Christensen spending months of the year in Manilla on the totally plausible premise of “church and charity work”, and Andrew Broad using his official travel as an opportunity to meet up with “sugar babies”, and Peter Dutton’s office sorting out visas for the au pairs of Liberal donors, and Angus Taylor slamming Sydney City Council for exorbitant travel expenses using numbers that don’t appear to exist outside of his office, and also Angus Taylor misrepresenting emissions data from his own department, and Stuart Robert claiming that his department’s own assessment of 1200+ deaths of people waiting for the NDIS was wrong while providing zero justification for doing so.

Oh, and Matthias Cormann “accidentally” directing the Coalition’s senate team to vote in support of a One Nation motion that “it’s OK to be white”, and for the entire Coalition senate team to presumably go “yeah, that seems a reasonable and good-faith proposal from an ethnicity-obsessed party, totally not going to question what seems obviously to be racist dog whistling, I’m in favour”.

And that’s just off the top of my head.

And from the government’s perspective that’s all OK, because it just makes people feel contempt for the government and opt out, and that’s what conservative governments ultimately want. There’s a reason they go on about “quiet Australians”: because asking anything of one’s government is just plain socialist.

God, imagine if they did a good job and restored trust in parliament and faith in responsible government! What’d that cost?

And so we have our treasurer Josh Frydenberg, who will still pursue a budget surplus in the face of a slowing economy, a national retail crisis and the biggest environmental disaster the nation has ever seen, because winning a point against the long-vanished Labor government of Kevin Rudd and Wayne Swan is more important than doing what’s right for the country.

What’s worst is that he’s not even stupid for doing do that either, because a surplus is literally the only thing that the Morrison government has promised. If they can’t deliver that, it’s not like there are other triumphs to deflect attention.

Even the whole #SportsRorts thing is on message: Sophie Mirabella had lost the seat of Indi when she all but declared that the government had spitefully withheld a $10 million hospital upgrade from Wangaratta because the electorate had failed to vote her back into her rightful seat – a favour they repeated at the next election.

And being PM means taking responsibility for handling what befalls the nation. Our history is full of Prime Ministers who had events turn against them, whether it was James Scullin becoming PM two days before the 1929 stock market crash, or Robert Menzies turning up just in time to have WWII declared on his watch, or Gough Whitlam’s optimistic new government colliding with the Energy Crisis, or John Howard facing the horror of the Port Arthur Massacre, or Kevin Rudd being in the chair for the GFC.

All stepped up and faced the challenges, and in several cases paid a terrible personal and political price.

But until now no PM had ever responded to a devastating national emergency by denying it, then saying it was a state issue, then blaming their wife for them taking a holiday, then systematically failing to take timely action before waging a propaganda war starting with “arsonists” and ending with an attempt to spin it such a way as to benefit mining companies.

That takes a very particular type of coward.

THANK YOU FOR READING THIS FURIOUS RANT. THE NEXT THING WILL BE FUNNIER, I PROMISE.

For other rants I’ve written for other things why not check out my Authory page, and there are always things up on m’Facebook and m’Twitter and occasionally m’Instagram, if you happen to follow them.