The post The Israel-Gaza conflict triggered a wave of antisemitic incidents. Some American Jews are taking off their kippahs and Stars of David. appeared first on Jewish Telegraphic Agency.

(JTA) — When Ricki moved into her new ground floor apartment in New York City less than a year ago, she felt perfectly comfortable placing a mezuzah on the front door for all who passed through the lobby to see.

Today she feels less sanguine about that choice.

Ricki hasn’t removed the mezuzah, but she has asked the building’s management to put bars on her windows. And she’s still considering taking down the Jewish symbol.

“When I put it up I was really proud of it,” Ricki said, declining to use her last name due to privacy concerns. “I’m not embarrassed of being Jewish, I knew when I put it up that people would see it. But I really didn’t think twice about it.”

She’s not alone in having second thoughts now.

This week, Jews across the United States have been attacked because of the fighting in Israel and Gaza. In Los Angeles, pro-Palestinian attackers threw punches and bottles at diners at a sushi restaurant. In New York’s heavily Jewish Diamond District, protesters of Israel threw fireworks from a car amid a violent street altercation.

As footage of those attacks and others spreads online, American Jews say they are feeling a renewed anxiety around identifying themselves publicly as Jews. Some are taking off their kippahs or Star of David necklaces. Others, like Ricki, are considering the removal of their mezuzahs. Some are mulling whether it’s safe to walk into synagogue.

That anxiety has long been familiar to Jews in Europe and elsewhere in the world. At times it has reared its head in the United States, like in 2018 following the massacre at the Tree of Life synagogue in Pittsburgh. A survey last year by the American Jewish Committee found that nearly a quarter of Jewish respondents avoided wearing or displaying something that would mark them as Jewish at some point in the previous two years.

This week, American Jews feared they could be targeted due to an association, real or imagined, with Israel and its actions regarding the Palestinians. For some American Jews, that fear is manifesting in decisions to tamp down their public displays of Jewishness as a way to protect themselves.

“On the one hand I want to be a proud Jew and express to the world that that’s something I’m passionate about,” said Drew Feldman, a theater director and writer who has taken to wearing a baseball cap more often in recent days rather than his kippah due to the tension he feels around the conflict in Israel. “On the other hand, the Torah says we have to put life above all else.”

Feldman, who spent the past several months living in Tennessee, first started wearing a kippah regularly in 2015 as he became more interested in his Judaism and more observant. He recently called his rabbi to discuss whether it would be appropriate to stop wearing it for a while.

“When I’ve traveled to Europe, I’ve done that because I’ve been told it’s a safer thing to do in places like France,” Feldman said. “This is really the first time outside of traveling to Europe or elsewhere that I’ve put on a different hat or baseball cap and not done it simply for fashion, done it out of a sense of anxiety or maybe fear.”

Rabbi Adir Yolkut of Temple Israel Center in White Plains, New York, said he had never seriously worried for his safety walking to synagogue on Shabbat morning wearing a kippah.

“I just sort of had a fleeting thought that was not so fleeting, is this something I should be nervous about?” he said. “Should I take more precautions than I usually need to? Because it feels like you don’t know where it’s coming from.”

On Friday, the Diamond District was calm and host to a typical range of Jewish characters: Men in kippahs stood on every corner, a group of haredi Orthodox boys fist bumped a store owner dressed in jeans and a T shirt, a group of Chabad-Lubavitch emissaries approached bystanders asking “Are you Jewish?”

But there was a smattering of police throughout the neighborhood’s few blocks, and some Jewish store employees were wary.

Emanuel Shimunov had witnessed the previous day’s violence through his store window. According to Shimunov, it started when a Jewish boy said “Peace in Israel” to the pro-Palestinian protesters driving through the street. They began cursing at him, then fought with a man who came out to protect the boy. 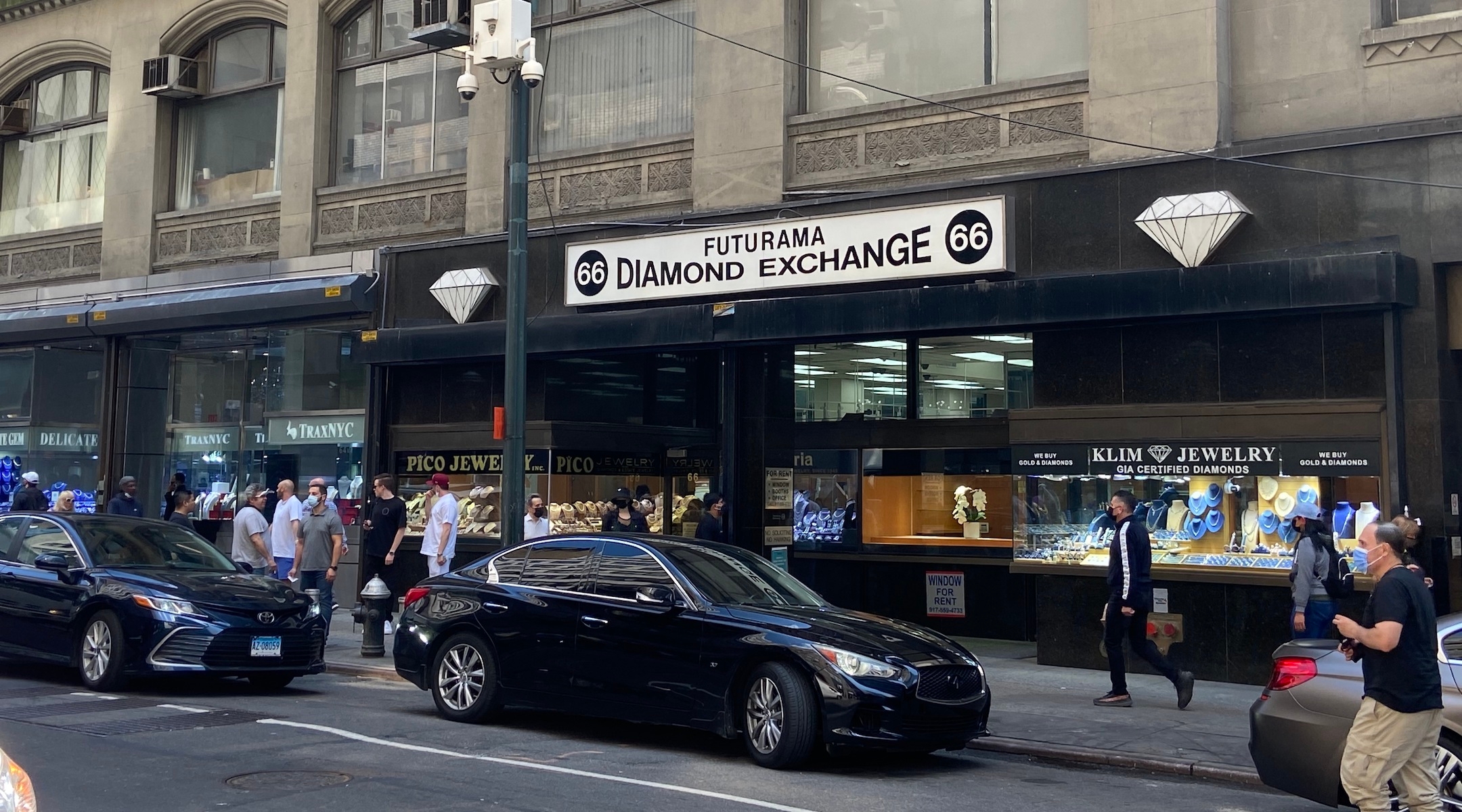 Ian Steiner, who lives on Manhattan’s Upper West Side, which has a large Jewish population, doesn’t attend synagogue frequently. But after seeing the news about attacks on Jews in New York City and Los Angeles, he decided to offer to escort other Jews to and from synagogue if they felt unsafe walking alone.

“I’m a bigger guy and I’m not scared,” he said. “I know I’m strong and I’m young and agile, and if an older person or someone is afraid to go to shul or to practice their religion, I have the duty to do something to make sure they feel safe.”

The Secure Community Network, which coordinates security for Jewish institutions nationwide, has received dozens of reports of antisemitic incidents over the past week, said its CEO, Michael Masters. He said a big difference between what happened this week and during the last Gaza War in 2014 is that social media is playing a larger role in fueling discord regarding the Israeli-Palestinian conflict in the United States.

“We’ve seen an incredible surge in online incidents and events, online acts of targeting or hate speech, as well as the ability of the [Jewish] community to share information about incidents and events,” he said. “If we look at the process by which people are motivated to violence, whether they are someone who follows supremacist ideology or they support Hamas, there’s absolutely no doubt that the proliferation of messaging on social media plays a role.”

The spate of attacks on Jews has given Jewish security officials deja vu to 2019, when antisemitism spiked in and around New York City and Jews suffered two lethal attacks.

Evan Bernstein, who runs the Community Security Service, a volunteer synagogue security organization, said when it comes to attacking Jews, the incidents in New York this week make it seem like the city has picked up from where it left off before last year’s pandemic restrictions took people off the streets. The attacks also come as many synagogues are transitioning back into holding services inside their buildings following a year of worshipping outdoors or virtually.

“So many people in the Jewish community thought that we just didn’t have to deal with this kind of antisemitism,” said Bernstein, whose organization is based in New York. “I kind of knew COVID was going to be the pause button on that. I’m sad that I’m right.”

Regarding antisemitism, while Bernstein said “the climate around us is very different” than it was a couple weeks ago, he isn’t giving his volunteer security patrols any special instructions for the coming Shabbat. Nor does he think New York has reached a point where people necessarily need to take off their kippahs in public, as many Jews do in Europe.

“I don’t think we should stop being openly Jewish,” he said. “If we get to that point in the United States where we can’t wear our yarmulkes comfortably and openly, we’re at a whole different level, and I hope that’s a conversation we don’t have to have.”

To Ricki, the fear that she may have to take down her mezuzah feels ironically painful. Grappling with the decision this week, she thought of her grandparents, who were Holocaust survivors. Growing up, she had felt safe as a Jew in America. Antisemitism had never felt like such an immediate threat as it did to her now in downtown Manhattan.

“I was always told that antisemitism is really real, but as someone in the millennial generation, maybe I was blind to it,” she said. “But now I’m like wow, I see it.”

The post The Israel-Gaza conflict triggered a wave of antisemitic incidents. Some American Jews are taking off their kippahs and Stars of David. appeared first on Jewish Telegraphic Agency.

READ:  My son was at the Mount Meron disaster