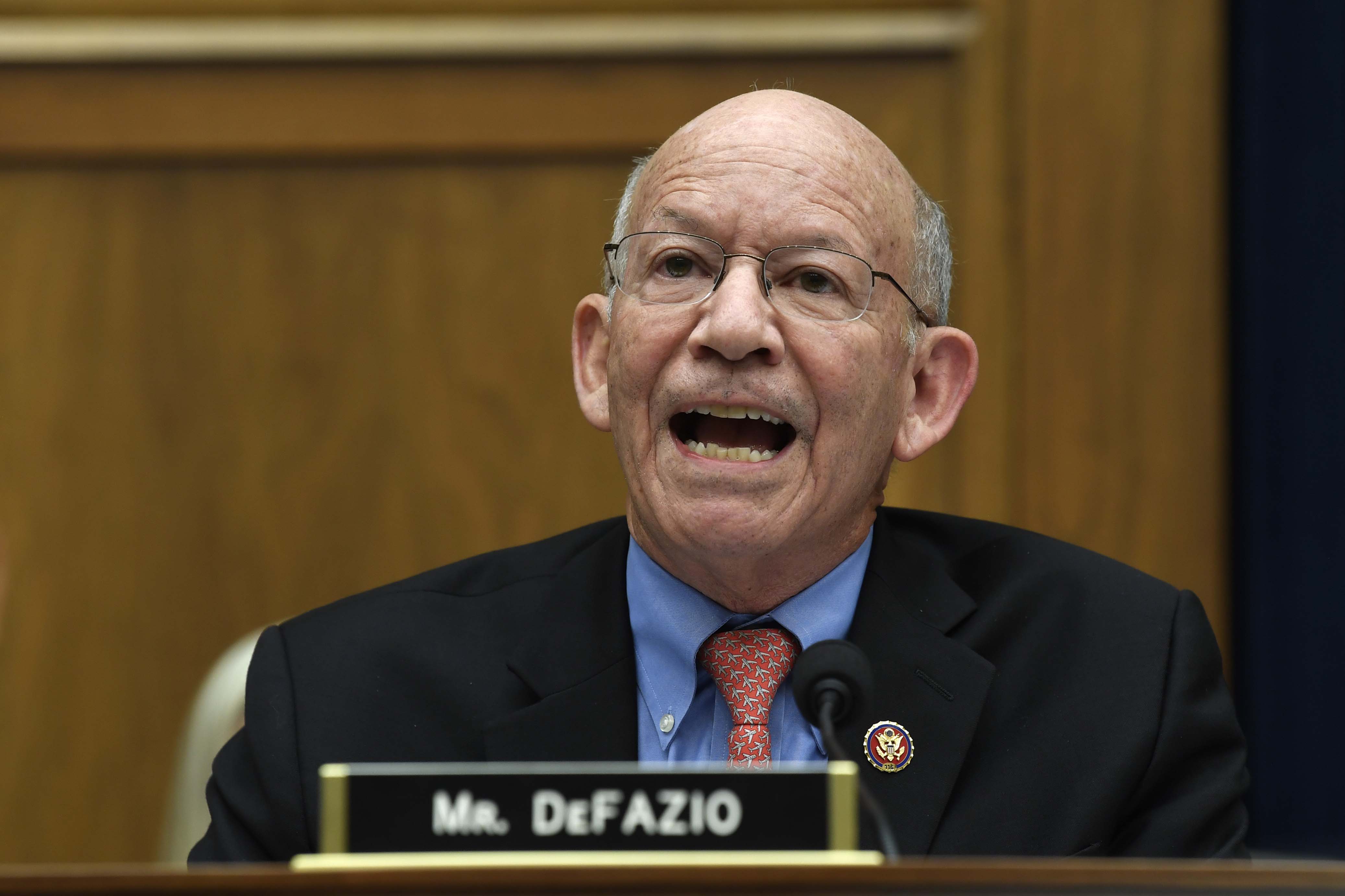 House Democrats on Wednesday denounced Boeing's "inconceivable and inexcusable" failure to disclose key safety vulnerabilities in its 737 MAX jet and excoriated the FAA for a process that allowed it, in a new report released ahead of a legislative push to tighten regulatory scrutiny of aircraft approvals.

The House Transportation Committee majority's 18-month probe into the failures that led to two overseas crashes that killed 346 people concludes, among other things, that Boeing failed to disclose to the FAA that pilots took a "catastrophically" long time reacting to a surprising malfunction of the flight control system that had been discovered in testing — and which ultimately has been implicated in both crashes.

“While it was not required to share this information with the FAA or Boeing customers, it is inconceivable and inexcusable that Boeing withheld this information from them,” the committee said in the report. “It also argues strongly for a disclosure requirement.”

The report charges that the congressionally mandated delegation system that allows aircraft manufacturers to approve their own designs as safe, under FAA supervision, is rife with inherent conflicts of interest. For instance, aircraft manufacturers supervise and pay the salaries of the people that are supposed to be the “eyes and ears of the FAA” — resulting in what committee Democrats call “regulatory capture on the part of the FAA,” leading to failures of oversight.

In four instances, the committee found that the FAA’s representatives at Boeing, working as part of the Organization Designation Authorization (ODA) program, “failed to represent the interests of the FAA” and allowed corporate cost-cutting priorities to color their judgment.

House Transportation Chair Peter DeFazio (D-Ore.) told reporters Tuesday that his legislation is “not going to scrap the whole [ODA] process“ but that he does plan on “adopting significant reforms.”

“Both FAA and Boeing came to the conclusion that the certification of the MAX, which killed 346 people in two accidents just a few months apart, was ‘compliant,’” DeFazio said. “But the problem is it was compliant but not safe, and people died. Obviously the system is inadequate.”

The committee found that Boeing was determined not to let differences between the older 737 NG aircraft and the new 737 MAX be deemed significant enough to require simulator training for pilots transitioning to the new aircraft, as that level of training would cost Boeing as much as $1 million per plane. As a result, the impact of the new flight control system, called the Maneuvering Characteristics Augmentation System (MCAS), had to be downplayed. FAA representatives at Boeing went along with this and did not clue the agency in to the real impact of the changes, even as they privately expressed reservations.

In a May 2013 strategy meeting, Boeing officials discussed the “problem” that “every new buzzword represents a company and airline cost via changed manuals, changed training, changed maintenance manuals.“ The recommended action that arose was to “investigate deletion of MCAS nomenclature and cover under the umbrella of ‘revised speed trim.’”

The committee said it appears that both the FAA’s designee to Boeing and the team manager agreed to keep “referring to MCAS by name internally“ and “externally we would communicate it as an addition to Speed Trim.”

Boeing has disputed this account, but the committee asserts that since that 2013 meeting, “Boeing has, in fact, repeatedly characterized MCAS as an addition to speed trim.“ As a result, pilots were left largely in the dark about significant changes to the aircraft.

Those designated safety representatives were also aware that faulty sensors giving incorrect readings of the angle of the airplane could repeatedly trigger the MCAS in a way that could make the plane hard to control, but did not inform the FAA. The “mandatory” alert that’s supposed to warn pilots when the sensors are in disagreement — indicating a possible sensor malfunction — were inoperable in fully 80 percent of the MAX planes. Still, FAA designees knowingly delivered aircraft with faulty alerts to airlines without letting FAA know.

Boeing complained to its software supplier of the problem but didn’t alert airlines or the FAA. The company decided — with the approval of the FAA designee — to hold off on fixing it for three more years “so it could be done in conjunction with the rollout of Boeing’s planned 737 MAX-10 aircraft," the report said. FAA has not held Boeing accountable for these lapses, the report alleges.

Had Boeing acknowledged that the flight control system was a “safety-critical” system, it “would have attracted greater FAA scrutiny during the certification process,” the committee said. Boeing executives acknowledged after the crashes that this should have happened.

“The operation of MCAS also violated Boeing’s own internal design guidelines related to the 737 MAX’s development which stated that the system should ‘not have any objectionable interaction with the piloting of the airplane and ‘not interfere with dive recovery,’” the report stated.

The report spends significant time documenting Boeing’s concerns with competitiveness and cost-cutting, suggesting that the impetus for building the MAX was to outcompete Airbus and to try to recoup some of the company’s past losses.

Boeing Commercial Airplanes CEO James Albaugh said in 2011, “I don’t think we will re-engine the 737“ as Airbus just had with the A320. But when American Airlines called to tell Boeing that they were “about to close a deal to purchase hundreds of A320-family airplanes from Airbus“ and “if Boeing wanted to maintain its business with American Airlines, Boeing would need to step up soon and offer a similar alternative aircraft or lose out on maintaining American as a customer,” Boeing changed course.

The imperative to cut costs influenced countless consequential decisions, including the choice not to install a pilot alert system that is standard on every other Boeing commercial aircraft line. “The FAA accepted Boeing’s argument about the impracticality and the economic expense of installing” that system, which “may have helped to alleviate pilot confusion in both the Lion Air and Ethiopian Airlines accidents” had it been present, according to the report.

In a statement, Boeing said it has “learned many hard lessons“ and made widespread changes to its safety culture as a result of the crashes and that the MAX has been put through an “intensive internal and regulatory review.“

“Once the FAA and other regulators have determined the MAX can safely return to service, it will be one of the most thoroughly-scrutinized aircraft in history, and we have full confidence in its safety,” Boeing said.

The report chronicles other evidence of what it calls the FAA’s “bias” toward Boeing and failure to take action to ensure safety in the face of known failures. In December 2018 — between the Lion Air crash and the Ethiopian Airlines crash —the FAA conducted a risk assessment “and estimated that without a fix to MCAS, during the lifetime of the 737 MAX fleet, there could potentially be 15 additional fatal crashes resulting in over 2,900 deaths,” according to the report. “Despite that assessment, the FAA permitted the 737 MAX to continue flying.”

The FAA said in a statement that it is “already undertaking important initiatives” based on lessons learned from its own and other reviews, and that it would work with the committee to “implement improvements identified in its report.” The agency noted that it “continues to follow a thorough process, not a prescribed timeline, for returning the aircraft to service.”


Throughout, the committee points to the ODA system as the root of much of the breakdown of safety oversight, faulting it for the “noted decline in product quality and safety culture at Boeing” that coincided with its rollout.

A bipartisan Senate bill, which will be marked up Wednesday would make changes to the certification system, but none as dramatic as those DeFazio may be contemplating.

DeFazio didn’t lay out a timeline for the bill or its release but said that he’s negotiating with House Republicans to craft what he hopes will be a bipartisan bill that can be passed by year's end.

But the top republican on the committee, Sam Graves of Missouri, called the report “partisan” in a statement that said the Democrats‘ investigation “began by concluding that our system was broken and worked backwards from there.“

“If aviation and safety experts determine that areas in the FAA’s processes for certifying aircraft and equipment can be improved, then Congress will act,” Graves said, adding that none of the “nonpartisan reports and investigations“ released to date “have concluded that the U.S. certification system is fundamentally broken or in need of wholesale reform.“

“Boeing does not appear to have fully accepted the lessons from the MAX accidents or taken responsibility for design errors,” the committee writes. “Without that recognition it is hard to believe that Boeing will make the changes necessary to improve its safety culture.”

Meanwhile, an international regulatory body is meeting this week in London to discuss new proposed training requirements for the MAX, one crucial step toward the eventual ungrounding of the aircraft.