September 29, 2021, YouTube banned and deleted our channel, and the channels of several others, including Robert F. Kennedy Jr., for violating its community guidelines. This despite the fact that much of our content has been up for over a decade and ne…

September 29, 2021, YouTube banned and deleted our channel, and the channels of several others, including Robert F. Kennedy Jr., for violating its community guidelines. This despite the fact that much of our content has been up for over a decade and never had any complaints from YouTube.

As you will see below, this is a blatant example of how government, technocratically-led nongovernmental organizations, social media platforms and media collude and coordinate attacks to censor people and organizations with whom they do not agree, or who pose a threat to their highly effective propaganda narrative.

Earlier that day, September 29, YouTube updated its community guidelines with an expansion of its already existing policy on medical misinformation. Whereas before the policy had focused on alleged misinformation relating specifically to the COVID shots, the expanded policy now includes ALL vaccines.

In a nutshell, as of September 29, 2021, you cannot post any video discussing or stating that ANY vaccine is dangerous or ineffective. As stated in the updated policy:1

“We’ve steadily seen false claims about the coronavirus vaccines spill over into misinformation about vaccines in general, and we're now at a point where it's more important than ever to expand the work we started with COVID-19 to other vaccines.

Specifically, content that falsely alleges that approved vaccines are dangerous and cause chronic health effects, claims that vaccines do not reduce transmission or contraction of disease, or contains misinformation on the substances contained in vaccines will be removed.

This would include content that falsely says that approved vaccines cause autism, cancer or infertility, or that substances in vaccines can track those who receive them. Our policies not only cover specific routine immunizations like for measles or Hepatitis B, but also apply to general statements about vaccines.”

YouTube does grant some exceptions to its new censorship rules, which in now-classic Orwellian double-speak are granted in the spirit of keeping “public discussion and debate to the scientific process” alive.

Vaccine content that will remain allowable includes discussions about “vaccine policies, new vaccine trials, and historical vaccine successes or failures,” as well as personal testimonials relating to vaccines — as long as the channel “doesn't show a pattern of promoting vaccine hesitancy.”

While the update notice states it’ll take some time to fully ramp up enforcement of these new guidelines, YouTube clearly had their sights set on booting certain individuals right from the start. They viewed me as such a major threat that they had to create new rules to “legitimately” censor me because they could not do it with their existing rules, which I never violated.

That same day, within hours of announcing the new rules, YouTube banned our channel and deleted all our videos without warning.

It’s a devious move, really. Just change the rules to match the (previously compliant) content of the individuals you want to remove, and provide users no time to remain in compliance by removing content that might be in violation.

Going forward, being compliant is not enough — you must be predictively compliant and ensure your videos don’t violate some future policy that may be dreamt up in a moment without notice. What happened next clearly demonstrates coordinated collusion between a number of players.

For starters, YouTube admits the new policy was developed after consulting with local and international health organizations. That most likely includes the U.S. Food and Drug Administration, the U.S. Centers for Disease Control and Prevention and the World Health Organization. I wouldn’t be surprised if one or more of Bill Gates’ vaccine-focused organizations, such as GAVI, were also consulted.

Several U.S. government officials have also gone on record singling me out as a leading threat to the COVID jab campaign, which is really just a front for a much larger and far more important agenda, namely the The Great Reset agenda. Make no mistake, this censorship is about money and geopolitical control, not public health.

WaPo Journalist Had Foreknowledge of the Ban

Just after 9 a.m. September 29, 2021, a journalist with the Washington Post contacted my media department, asking for a comment on YouTube’s takedown of my channel.

The article was embargoed, which means the journalist had already been told my channel was being removed due to the new rules, and the article was probably already written by the time they contacted me. WaPo broke the story at 9:35 a.m., stating in part:2

“In an email, Mercola said he was being censored and said, without presenting evidence, that vaccines had killed many people ... More than a third of the world’s population has been vaccinated and the vaccines have been proven to be overwhelmingly safe.”

Of course, WaPo didn’t present any evidence that the COVID shots are “overwhelmingly safe” either. In fact, the hyperlink goes to the CDC’s COVID-19 Reported Adverse Events page,3 which lists warnings for anaphylaxis, thrombosis with thrombocytopenia and Guillain-Barre syndrome after the Janssen shot, myocarditis and pericarditis after the Pfizer and Moderna shots, and death following all three.

Once WaPo published its article, others followed. Reuters at least included an entire sentence of the statement we sent in response to media inquiries:4

“A press email for Mercola's website said … ‘We are united across the world, we will not live in fear, we will stand together and restore our freedoms.’ Kennedy said in a statement: ‘There is no instance in history when censorship and secrecy has advanced either democracy or public health.’”

A Coordinated Attack on Freedom of Speech

The collective actions of government, Big Tech and media clearly show this was a coordinated attack on the freedom of speech of ordinary Americans. Government officials have publicly admitted they are coordinating censorship with Big Tech platforms, which, by the way, is illegal.

YouTube, which is owned by Google’s parent company Alphabet, now suddenly changes its medical misinformation rules after consulting with local and international “health authorities,” and immediately takes down the channels of the very people identified by those same government officials as the prime targets for censorship.

Media — at least one of which had foreknowledge of YouTube’s policy change and the imminent removal of our channel — then contacts us for comment, leaving virtually no time for response.

This, by the way, is a classic media tactic used in hit pieces. By not leaving time for a response, they can make you look guilty of just about anything. To many, refusing to respond comes across as not having a good defense or explanation.

We are united across the world, we will not live in fear, we will stand together and restore our freedoms.

Still, despite issuing a comprehensive response, the media didn’t include it. WaPo went so far as to misrepresent what little of my response they did include, as I specifically cited Vaccine Adverse Events Reporting System (VAERS) data, which is indeed evidence that these shots are killing “many” people.

I don’t know about you, but to me, 15,386 reported deaths following COVID “vaccination” (as of September 17, 20215) cannot be shrugged off as insignificant.

The Washington Post article cites the now-infamous “Disinformation Dozen”6 report conjured up by the Centre for Countering Digital Hate (CCDH) and AntiVaxWatch.org. — the same report that has been debunked and refuted by Facebook itself.7

One really wonders how the media manages to avoid the question regarding the lack of transparency of these groups, especially the completely anonymous AntiVaxWatch.org. The CCDH is no better, however. Not only is it run by an unregistered foreign agent, Imran Ahmed, it also appears to be funded by “dark money,” meaning by people and organizations whose identities are shielded or not released.

READ:  Why Did US Deaths Shoot Up 40% Above Normal Last Year?

According to Capital Research, through his funding of a Washington, D.C., consultant firm called Arabella Advisors, which allows his identity to be obscured, Wyss has been secretly influencing American policy.12,13 Reporter Hayden Lidwig has also described the inner workings of Arabella Advisors and the influence of the “dark money” flowing through it, noting that Arabella runs a:14

“… vast array of ‘pop-up groups’ … called so because they consist almost solely of slick websites that may pop into existence one day and pop out the next, usually once the campaign is through.”

It’s no surprise then that the CCDH, AntiVaxWatch and Arabella founder Eric Kessler are all applauding and/or taking credit for their role in YouTube’s takedown of the channels identified in the “Disinformation Dozen” report. 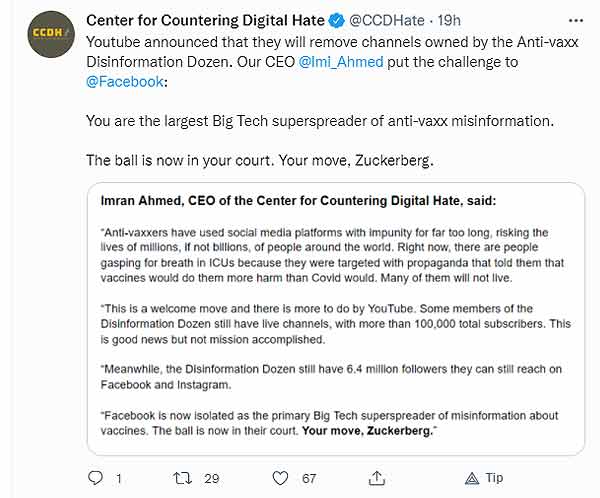 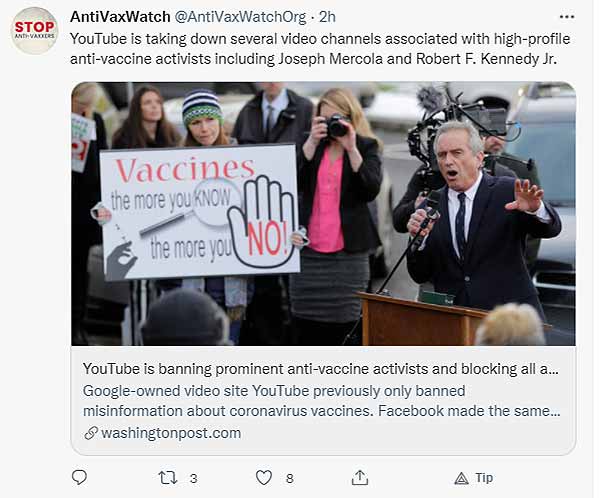 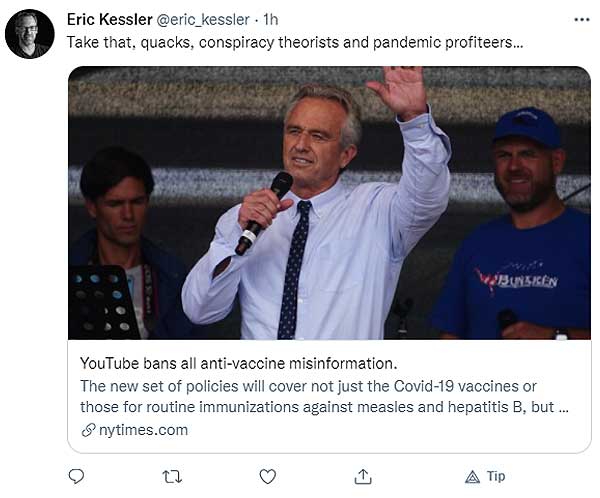 The Fight for Truth Continues

While the loss of our YouTube channel is regrettable, it’s not the end of the world. We’ve been preparing for this eventuality, and have been transitioning to other platforms such as BitChute and Rumble already. The fact that YouTube had to use underhanded tactics just to have an excuse to get rid of us only proves how compliant we had actually been all along.

This takedown also shows how coordinated these attacks are. No one acts alone. All the checks and balances have been removed and they’re all working together, which is why it’s so difficult to persist under this kind of regime. But persist we shall.