From Dr. Joseph Mercola
Since COVID-19 first entered the scene, exchange of ideas has basically been outlawed. By sharing my views and those from various experts throughout the pandemic on COVID treatments and the experimental COVID jabs…

Since COVID-19 first entered the scene, exchange of ideas has basically been outlawed. By sharing my views and those from various experts throughout the pandemic on COVID treatments and the experimental COVID jabs, I became a main target of the White House, the political establishment and the global cabal.

Propaganda and pervasive censorship have been deployed to seize control over every part of your life, including your health, finances and food supply. The major media is a key player and has been instrumental in creating and fueling fear.

I am republishing this article in its original form so that you can see how the progression unfolded.

According to Dr. Thomas Frieden, former director of the U.S. Centers for Disease Control and Prevention, COVID-19 is now the third leading cause of death in the U.S., killing more Americans than "accidents, injuries, lung disease, diabetes, Alzheimer's and many, many other causes."1,2

This claim is said to be based on data from Johns Hopkins University which, at the time Frieden made that statement in August 2020, reported that about 170,000 of the 5.4 million Americans who had tested positive had died.3 At the time of this writing, Johns Hopkins reports4 the U.S. has recorded 7,916,099 positive tests and 216,872 COVID-19-related deaths. 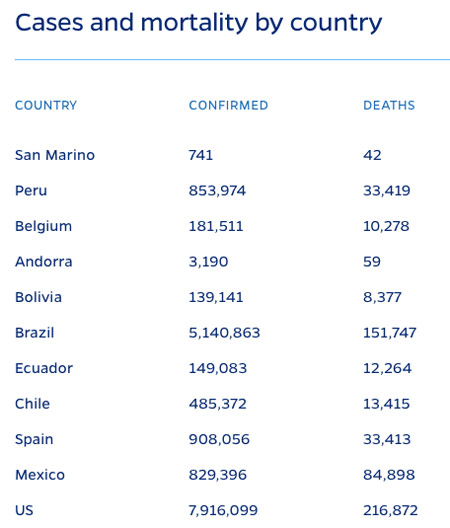 There are many reasons not to panic over Frieden's claim. I'll review mortality statistics in just a moment but, first, I want to highlight a leading cause of death that continues to be swept under the proverbial rug, namely medical errors, because medical errors also play a role in the death toll attributed to COVID-19.

Other research7 has estimated the number of Americans dying from medical mistakes may actually be as high as 440,000. The reason for the discrepancy in the numbers is because medical errors are rarely noted on death certificates, and death certificates are what the CDC relies on to compile its death statistics.

As a result, the severity of the problem goes unnoticed. Either way, whether it's 250,000 or 440,000, medical errors still claim more lives than COVID-19 has, and it does so on an annual basis.

We also need to remember that a large portion of those who died from COVID-19 were in fact victims of medical errors. As I reported in "Nurse on the Frontlines of COVID-19 Shares Her Experience" and "Frontline Nurse Speaks Out About Lethal Protocols," Elmhurst Hospital Center in Queens, New York — which was "the epicenter of the epicenter" of the COVID-19 pandemic in the U.S. — grossly mistreated COVID-19 patients, causing their death.8

According to Army trained nurse, Erin Olszewski, who worked at Elmhurst during the height of the pandemic, hospital administrators and doctors made a long list of errors, most egregious of which was to place all COVID-19 patients, including those merely suspected of having COVID-19, on mechanical ventilation rather than less invasive oxygen administration.

During her time there, most patients who entered the hospital wound up being treated for COVID-19, whether they tested positive or not, and only one patient survived. The hospital also failed to segregate COVID-positive and COVID-negative patients, thereby ensuring maximum spread of the disease among noninfected patients coming in with other health problems.

READ:  Can You Eliminate Bad Breath for Good?

By ventilating COVID-19-negative patients, the hospital artificially inflated the case load and death rate. Disturbingly, financial incentives appear to have been at play. According to Olszewski, the hospital received $29,000 extra for a COVID-19 patient receiving ventilation, over and above other treatments. In August 2020, CDC director Robert Redfield admitted that hospital incentives likely elevated hospitalization rates and death toll statistics around the country.

Another major error that drove up the death toll was state leadership's decision to place infected patients into nursing homes, against federal guidelines.9 According to an analysis10,11 by the Foundation for Research on Equal Opportunity, which included data reported by May 22, 2020, an average of 42% of all COVID-19 deaths in the U.S. had occurred in nursing homes, assisted living and other long-term care facilities.

This is extraordinary, considering this group accounts for just 0.62% of the population. By and large, nursing homes are ill equipped to care for COVID-19 infected patients.12 While they're set up to care for elderly patients — whether they are generally healthy or have chronic health problems — these facilities are rarely equipped to quarantine and care for people with highly infectious disease.

It's logical to assume that comingling infected patients with noninfected ones in a nursing home would result in exaggerated death rates, as the elderly are far more prone to die from any infection, including the common cold. We also learned, early on, that the elderly were disproportionately vulnerable to severe SARS-CoV-2 infection.

ProPublica published an investigation14 June 16, 2020, comparing a New York nursing home that followed Cuomo's misguided order with one that refused, opting to follow the federal guidelines instead. The difference was stark.

By June 18, the Diamond Hill nursing home — which followed Cuomo's directive — had lost 18 residents to COVID-19, thanks to lack of isolation and inadequate infection control. Half the staff (about 50 people) and 58 patients were infected and fell ill.

In comparison, Van Rensselaer Manor, a 320-bed nursing home located in the same county as Diamond Hill, which refused to follow the state's directive and did not admit any patient suspected of having COVID-19, did not have a single COVID-19 death. A similar trend has been observed in other areas.

If it weren't for systematic medical mistreatment at certain hospitals and incomprehensible decision-making by a handful of state governors, the COVID-19 death toll may well have been negligible.

We should also remember that a) the vast majority of people died with SARS-CoV-2 infection, not from it, and b) medical treatments showing significant promise have been savagely censored and even barred from use based on falsified and seriously flawed studies.

According to groundbreaking data15 released by the CDC August 26, 2020, only 6% of the total COVID-19-related deaths in the U.S. had COVID-19 listed as the sole cause of death on the death certificate.

Six percent of 201,141 (the total death toll reported by the CDC as of October 14, 2020) is 12,068. In other words, SARS-CoV-2 infection was directly responsible for just over 12,000 deaths of otherwise healthy individuals. The remaining 94% had an average of 2.6 health conditions that contributed to their deaths.

READ:  Race Is On for an Omicron Jab

When you add all of these factors together — the wanton mismanagement of the infection in hotspots such as New York, the decision to send infected patients into nursing homes, the fact that few healthy people died from the infection and that potential medical treatments have been and still are actively suppressed — it kind of starts to look like a manufactured crisis.

Infection Fatality on Par With the Flu

While Frieden is now stoking fears by claiming COVID-19 is the third leading cause of death, and Scientific American is calling the claim that its fatality is on par with the flu "fake news,"16 I would call your attention to research looking at the fatality ratio for the average person, excluding those residing in nursing homes and other long-term care facilities.

The September 2, 2020, article17 in Annals of Internal Medicine points out that, because many who test positive for SARS-CoV-2 remain asymptomatic it's very difficult to estimate the true infection rate, and when calculating mortality rates based on confirmed "cases" (meaning positive tests) you end up overestimating the infection fatality ratio. As explained by the authors:18

In brief, our stratified random sample consisted of state residents aged 12 years and older. Known decedents and incarcerated persons were excluded. Because nursing homes were limiting residents' ability to leave and re-enter the facilities, their participation was unlikely.

Participants were tested from 25 April to 29 April 2020 for active viral infection and SARS-CoV-2 antibodies, which would indicate prior infection ... We calculated the IFR by age, race, sex, and ethnicity on the basis of the cumulative number of confirmed COVID-19 deaths as of 29 April 2020, divided by the number of infections.

To account for all infections, we added the number of patients hospitalized with COVID-19 during the testing period and noninstitutionalized COVID-19 deaths into the denominator ...

Our random-sample study estimated 187,802 cumulative infections, to which 180 hospitalizations were added. The average age among all COVID-19 decedents was 76.9 years.

The estimated infection fatality rate for seasonal influenza listed in this paper is 0.8%. Other sources put it a little higher. In either case, according to this paper the only people for whom SARS-CoV-2 infection is more dangerous than influenza are those over the age of 60.

READ:  Is the Great Reset for Energy Compatible With Life?

White House coronavirus task force coordinator Dr. Deborah Birx also confirmed this far lower than typically reported mortality rate when she, in mid-August 2020, stated that it "becomes more and more difficult" to get people to comply with mask rules "when people start to realize that 99% of us are going to be fine."19

In addition to COVID-19 having a lethality on par with the flu (again for the average person under the age of 60):

As reported by British Sky News,35 October 7, 2020, respected scientists are now calling for a herd immunity approach to the pandemic, meaning governments should allow people who are not at significant risk of serious COVID-19 illness to go back to normal life. As of October 18, 2020, The Great Barrington Declaration36 had been signed by 10,601 medical and public health scientists and 29,296 medical practitioners.37

At this stage in the game, there's plenty of cause for optimism. In addition to data showing COVID-19 is nowhere near as lethal as initially suspected, we now have a number of safe and effective treatments. Two that I would place toward the top of the list are:

• Nebulized hydrogen peroxide (see video above) — This is a home remedy I recommend everyone familiarize themselves with, as in many cases it can improve symptoms within mere hours. It's even been shown to be effective in the later stages of the illness.

Dr. David Brownstein, who has successfully treated over 100 COVID-19 patients with nebulized hydrogen peroxide, published a case paper38 about this treatment in the July 2020 issue of Science, Public Health Policy and The Law. He also discusses its benefits in a recent interview I did with him.

I review some of the basic science of how hydrogen peroxide works, as well as some of the studies assessing its therapeutic potential, in my April 2020 article "Could Hydrogen Peroxide Treat Coronavirus?"

• The MATH+ Protocol, developed by the Front Line COVID-19 Critical Care Working Group39 (FLCCC) — There are now MATH+ protocols40 for prophylaxis, mild symptoms that can be treated at home, and a full clinical in-hospital critical care protocol. The group has issued several updates since April 2020, so be sure to download the latest versions from the Eastern Virginia Medical School COVID Care for Clinicians site.41

Overall, optimizing your vitamin D level appears to be a foundational strategy to minimize your risk. To learn more, download my vitamin D report from StopCOVIDCold.com. There, you can also find a quick COVID-19 risk quiz to help you assess your general risk.