Vitamin K is a fat-soluble vitamin essential for the functioning of several proteins involved in physiological processes. Naturally occurring forms are vitamin K1 (referred to as phylloquinone) and vitamin K2 (called menaquinones).1,2

Vitamin K is a fat-soluble vitamin essential for the functioning of several proteins involved in physiological processes. Naturally occurring forms are vitamin K1 (referred to as phylloquinone) and vitamin K2 (called menaquinones).1,2

Vitamin K1, which is derived from green plants, is best known for the role it plays in blood clotting, while vitamin K2, derived primarily from fermented foods and animal products such as eggs, meat and liver,3 is important to hormone production and utilization, as well as bone and heart health.

Vitamin K2 does not get the attention it deserves, and it's highly likely you're not getting enough in your diet. Although fat-soluble, the body stores very little and it's rapidly depleted without regular dietary intake.

Before discussing the numerous areas of your health where vitamin K2 has a significant impact, it's first important to understand the different forms of the vitamin.

The Different Forms of Vitamin K2

Vitamin K2 is needed to activate the protein osteocalcin, which is found in your bones. Without vitamin K2, this and other vitamin K2-dependent proteins remain inactivated, and cannot perform their biological functions.4

According to Leon Schurgers, a world-renowned researcher in vitamin K2, the difference between vitamins K1 and K2 was clearly established in The Rotterdam Study,5 published in 2004, of which Schurgers was a co-author.

While the study focused on the difference between how K1 and K2 affect the heart (K1 has no effect at all), the researchers also looked at what types of foods supply each of the vitamins. In an interview, he said:

However, the absorption of vitamin K1 from food is extremely low. Only 10 percent of the vitamin K which is found in green leafy vegetables, is absorbed in your body ... And there's no variable or modification of the consumption that will significantly increase the absorption ..."

Vitamin K2, on the other hand, was only present in fermented foods. It's actually produced by specific bacteria during the fermentation process. Certain bacteria in your gut naturally produce vitamin K2 in your body as well. Interestingly, while the K1 in vegetables is poorly absorbed, virtually all of the K2 in fermented foods is readily available to your body. Vitamin K2 can be further broken down into:6,7,8

• MK-4 (menaquinone-4), a short-chain form of vitamin K2 found in animal-based foods such as meats dairy and eggs. MK-4 also has a very short biological half-life — about 2.5 hours — making it a poor candidate as a dietary supplement.

That said, natural MK-4 from food is important for good health,9 as MK-4 plays a role in gene expression, turning some genes off and others on, and is therefore important for cancer prevention.10

• MK-7 (menaquinone-7), longer-chain forms found in fermented foods. There's a variety of these long-chain forms, but the most common one is MK-7. This is the one you'll want to look for in supplements, as this form is extracted from real food, specifically natto,11 a fermented soy product.

READ:  COVID Criminal Network Leads to the Gates of Hell

The MK-7, which forms in the fermentation process, has two major advantages. It stays in your body longer and has a longer half-life, which means you can take it just once a day in very convenient dosing.12 Research13 has shown MK-7 helps prevent inflammation by inhibiting proinflammatory markers that can cause autoimmune diseases like rheumatoid arthritis.

While vitamin K1 has been found to "moderately reduce" the risk of bone fractures,14 MK-7 is more effective than vitamin K1 at reaching your bone.15,16 In your bones, vitamin K2 is used to produce osteocalcin, improving metabolic and hormonal health and exercise performance. 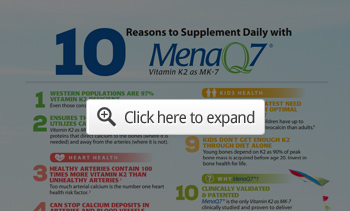 Calcium deposits in the arteries are responsible for atherosclerosis, hardening and narrowing of the arteries, slowly blocking blood flow.

It's a common cause of heart attacks, strokes and peripheral vascular disease. Vitamin K2 is important in the activation of important proteins, such as matrix GLA-protein (MGP), found in your vascular system,17 and studies have demonstrated K2 inhibits arterial calcification and improves arterial flexibility,18,19 thereby reducing your risk of atherosclerosis.

One recent study20 proposed therapeutic supplementation with vitamin K2 could prevent or halt progression of vascular calcification that may occur with excessive calcium intake, and other studies have demonstrated those eating the highest amount of vitamin K2 have the lowest risk of developing cardiovascular disease.21

Vitamin K2 also functions as an important cofactor for calcium and vitamin D. While calcium is important for strengthening bones and overall skeletal health, it only works when it gets to the right place. Vitamin K2 prevents calcium from being deposited along the walls of the blood vessels and directs it into the bone.22

So, it's important to remember that vitamin K2 and vitamin D (along with calcium and magnesium) have a synergistic relationship when it comes to your bone and heart health. To maximize your benefits of oral vitamin D supplementation, it's important to maintain optimal levels of vitamin K2.23 Studies indicate supplementing with both vitamins D3 and K2 offers greater cardiovascular health benefits than consuming either vitamin alone.24

As mentioned earlier, vitamin K2 activates osteocalcin, a protein hormone made by your bone that is dependent on K2 for activation via carboxylation. One of the primary roles osteocalcin plays is in binding calcium and transporting it to the bone.25

Osteocalcin is a small non-collagenous protein measured in the serum and synovial fluid samples of people with osteoarthritis,26 and researchers believe serum levels of osteocalcin may be useful as a screening tool to assess osteoporosis risk.27

Vitamin K2 is also important for your oral health. Preserving enamel helps reduce cavity formation. Your enamel is made of hollow tubes that extend into the dentin. The enamel is made of nonliving cells, while the dentin has live cells called odontoblasts.

READ:  This 500-Plant Edible Garden Mostly Cares for Itself

These cells release proteins using vitamin K2 to help prevent tooth decay through an immune response.28 Research has demonstrated osteocalcin may be found in inflamed tissue, and researchers consider the protein to have a reparative role in dental pulp.29

The inflammatory response is a crucial component in many chronic diseases and diseases of aging. Scientific evidence suggests both vitamin K1 and K2 have anti-inflammatory activity, in part by inhibiting nuclear factor kappa-B.30

For example, in one meta-analysis,31 researchers found evidence vitamin K has a protective role in chronic aging conditions, inflammation and cardiovascular disease. Another study32 confirmed the role the vitamin K2 MK-7 form specifically has in the modulation of inflammatory biomarkers.

The researchers evaluated natural vitamin K2 for its potential to inhibit gene expression and production of pro-inflammatory markers in vitro, finding the MK-7 form inhibited gene expression in a dose-dependent manner.

Other research33 has demonstrated a reduction in C-reactive protein, a common biomarker used to evaluate inflammation in patients with rheumatoid arthritis. C-reactive protein is a risk marker for a wide range of diseases and the researchers concluded higher intake of vitamin K2 may lower overall risk.

Vitamin K2 has an effect in women as well, as the vitamin may be helpful in the management of polycystic ovarian syndrome (PCOS). This is now the most common hormonal disorders in young women, causing enlarged ovaries and potentially leading to fertility problems.38

In one randomized study, 60 vitamin D deficient women with PCOS took either a placebo or a combination of calcium, vitamin D and vitamin K for eight weeks. Those in the treatment group enjoyed greater decrease in testosterone and symptoms than the placebo group.39

How K2 May Influence Insulin Sensitivity

An unexpected discovery was made when researchers found bone was an endocrine organ, contributing to the regulation of a number of physiological processes, including glucose homeostasis.40

Part of the problem may have something to do with the form of vitamin given. Numerous studies have demonstrated synthetic vitamin K2 supplements are not as effective as natto-derived K2 supplements.

Statins Contribute to the Depletion of Vitamin K2

Nearly 25% of Americans over the age of 45 are taking cholesterol-lowering statin drugs, despite the high risks of the drugs. In addition to other side effects, statins inhibit the production of vitamin K2.

A study published in Expert Review of Clinical Pharmacology44 revealed statins may actually stimulate the development of atherosclerosis and heart failure, and one of the mechanisms by which this occurs is the inhibition of the synthesis of vitamin K2, which protects your arteries from calcification.

How to Boost Your Intake of Vitamin K2 Naturally

If you decide to take a statin or use a vitamin D3 supplement, it is highly recommended you include a vitamin K2 supplement in the MK-7 form. Seek out a supplement extracted from the Japanese fermented soy product called natto. Professor Cees Vermeer,45 one of the world's top vitamin K2 researchers, recommends between 45 micrograms (mcg) and 185 mcg daily for adults.

Just remember that since vitamin K2 is fat-soluble, it's best to take it with a small amount of fat to improve absorption. Consuming foods rich in vitamin K2 is your best bet. MK-4 is found in animal foods such as free-range, organic eggs (particularly the yolk), dark chicken meat and goose liver. MK-7 is found in fermented foods such as natto, a type of fermented soy, and in soft and hard cheeses such as Brie and Gouda.