Sepsis is a life-threatening condition triggered by a systemic infection that causes your body to overreact and launch an excessive and highly damaging immune response. Unless promptly diagnosed and treated, it can rapidly progress to multiple-organ fa…

Sepsis is a life-threatening condition triggered by a systemic infection that causes your body to overreact and launch an excessive and highly damaging immune response. Unless promptly diagnosed and treated, it can rapidly progress to multiple-organ failure and death.

A number of studies have shown sepsis is becoming ever more prevalent, making it imperative to be on the lookout for its signs and symptoms whenever you're ill or in the hospital.

This includes cases of suspected influenza, as sepsis can mimic many of the signs and symptoms of the flu. In fact, sepsis is one of the leading causes for influenza deaths. Studies have also identified sepsis as a top cause of death in hospitals, and one of the primary causes of serious harm due to misdiagnosis. Findings show that:

Now, the most comprehensive global analysis7,8 done to date warns that sepsis is responsible for 1 in 5 deaths worldwide each year. The researchers call the finding "alarming," as their updated figures are double that of previous estimates. As reported by NPR:9

"They estimate that about 11 million people worldwide died with sepsis in 2017 alone — out of 56 million total deaths. That's about 20% of all deaths. 'It's a massive number,' [lead author Dr. Kristina] Rudd says."

An estimated 85% of these sepsis-related deaths occur in low- to middle-income countries.10 Surprisingly, the paper,11 "A Global Accounting of Sepsis," published in the January 18, 2020, issue of The Lancet, suggests the rate of sepsis has actually declined by about half since 1990. NPR reports:12

"That's a surprising finding, says Dr. Chanu Rhee, who studies sepsis and infectious disease at Harvard Medical School. 'It's really interesting that in their study, they actually found the incidence of sepsis declined over the study period,' he says, 'where other studies have actually suggested the opposite.'"

The authors of The Lancet study do point out that their findings "must be viewed in context with the constraints of the analysis," as "modelling assumptions and imputation steps can introduce bias." They explain:13

"The model inputs to estimate the burden of sepsis for 195 countries came from the vital records of four countries (Brazil, Mexico, Taiwan, and the USA), and data for hospital case-fatalities were obtained from ten countries (Austria, Brazil, Canada, Chile, Georgia, Italy, Mexico, New Zealand, Philippines, and the USA), resulting in extrapolation from countries of high and middle incomes to low-income countries.

Because some continents (notably Africa) are not represented as original sepsis data sources, longitudinal trends might be unreliable. Hypothetically, improvements in Brazil as a primary data source country could create the appearance of benefits for sub-Saharan Africa, irrespective of actual local changes."

A significant hurdle when studying sepsis is the fact that many doctors overlook it as a contributing cause of death, and don't list it on the death certificate. Rhee, who has investigated the sepsis burden in the U.S., tells NPR that — based on his own findings of U.S. death certificates — sepsis may actually play a role in more than 20% of deaths worldwide,14 considering most sepsis deaths occur in countries lacking the medical care available in more affluent nations.

Signs and Symptoms of Sepsis

Despite its prevalence, sepsis is frequently overlooked, even by health care professionals. For this reason, it's really important to familiarize yourself with the signs and symptoms of sepsis, and to take immediate action if you suspect sepsis.

Also inform the medical staff of your suspicion, as time is of the essence when it comes to treatment. Hydration is of utmost importance, as much of the damage caused by sepsis begins with the loss of fluids.

While the signs can be subtle at first, sepsis typically produces the following signs and symptoms:15,16,17 Many of these symptoms may be confused with a bad cold or the flu. However, they tend to develop quicker than you would normally expect.

The Sepsis Alliance recommends using the acronym TIME to remember some of the more common symptoms:18

Another acronym you could use to memorize the signs and symptoms is SEPSIS, described in the video above:

Beware: Sepsis Plays a Role in Many Influenza Deaths

Importantly, sepsis has been identified as a major contributor in influenza deaths. According to researchers, "Severe sepsis is traditionally associated with bacterial diseases … However, viruses are becoming a growing cause of severe sepsis worldwide."

As noted in the video above, some sepsis symptoms also resemble those of influenza, which can have tragic consequences if you do not seek medical help in time. The video offers guidelines on how to tell the difference between the two.

Sepsis, without doubt, requires immediate medical attention, whereas most people will successfully recover from flu with a few days to a week of bedrest and fluids. Just how influenza can lead to sepsis is a somewhat complex affair, described as follows:19

[C]ytokines … released from endothelial cells and subsequently from macrophages can induce lymphocyte activation and infiltration at the sites of infection and will exert direct antiviral effects. Subsequently, with the shift toward an anti-inflammatory state, activated Th2 cells secrete interleukin-4 (IL-4) and interleukin-10 (IL-10).

An abnormal immune response to influenza can lead to endothelial damage … deregulation of coagulation, and the consequent alteration of microvascular permeability, tissue edema, and shock."

Remember to Ask for This Life-Saving Sepsis Protocol

If you or a loved one succumbs to sepsis, whether caused by influenza or some other infection, please remember that a protocol of IV vitamin C with hydrocortisone and thiamine (vitamin B1) can be lifesaving,20 so urge your doctor to use it. Chances are, they might not even be aware of it.

This sepsis treatment protocol was developed Dr. Paul Marik, a critical care doctor at Sentara Norfolk General Hospital in East Virginia, and clinical use has proven it to be remarkably effective for the treatment of sepsis, reducing mortality nearly fivefold.

Marik's retrospective before-after clinical study21,22 showed that giving patients IV vitamin C with hydrocortisone and vitamin B1 for two days reduced mortality from 40% to 8.5%. Of the 50 patients treated, only four died, and all of them died from their underlying disease, not sepsis.

The precise protocol used was 200 mg of thiamine every 12 hours, 1,500 mg of ascorbic acid every six hours, and 50 mg of hydrocortisone every six hours.23 Importantly, the treatment has no side effects and is inexpensive, readily available and simple to administer, so you really have nothing to lose by trying it.

Sentara Norfolk General Hospital, where Marik works, has made the protocol its standard of care for sepsis, and other hospitals are also starting to follow suit. Unfortunately, many are still dragging their heels, waiting for the completion of additional clinical trials.

According to Marik, vitamin C and corticosteroids have a synergistic effect,24 which is part of why his combo protocol is so effective. Still, simply using high-dose IV vitamin C exclusively has been shown to improve survival in patients with sepsis and acute respiratory failure, reducing mortality from 46% to 30%.25

While there are no trials that look at integrating hyperbaric oxygen therapy, my strong suspicion is that this would be a powerful synergy that could get the fatality rate from the problem far closer to zero. Sadly, this treatment is not available at many hospitals, and even if it were, it is not approved for this indication.

Educational Resources for Your Doctor

Marik's sepsis protocol can be a lifesaver, so you'd be wise to discuss it with your doctor any time you're hospitalized. Remember, sepsis is often the result of a secondary infection contracted while in the hospital, so it's prudent to be prepared.

This way, should you develop sepsis while you're admitted, your medical team already knows your wishes and can act swiftly. According to Marik, the best results are obtained when the concoction is administered within the first six hours of presentation of symptoms.27 The longer you delay treatment, the less likely it will be successful.

You can learn more about Marik's sepsis protocol in "Vitamin C — A Game Changer in Treatment of Deadly Sepsis," along with commonsense recommendations for how to lower your risk of sepsis in the first place. You can also review Marik's PowerPoint presentation, "Hydrocortisone, Ascorbic Acid and Thiamine for the Treatment of Severe Sepsis and Septic Shock," presented at the 2020 Critical Care Reviews meeting in Australia. 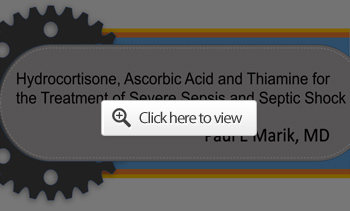 If your doctor refuses to consider it offhand, convince him or her to review the studies cited here.28,29,30,31,32,33,34,35,36,37 Simply look up the references 27 through 36 and make copies to take to your doctor. Alternatively, you can go to PubMed38 directly and type in "vitamin C" and "sepsis" in the search engine and you will get a list of the available research.

While there are certain situations in which the hospital may still deny this treatment, if you are an adult who is sick, you will usually have the right to insist on it. I will actually be interviewing Marik shortly and hope to work with him on developing a process to make it easier for patients to implement this strategy in their local hospital.

In most cases, you'd probably just need to sign an "Against Medical Advice — Acknowledgment and Waiver" form (samples of which can be found in the references39), which states you've elected to not follow the standard of care recommended by your doctor.

The only contraindication is if you are glucose-6-phosphate dehydrogenase (G6PD) deficient (a genetic disorder).40 G6PD is required for your body to produce NADPH, which is a cousin of NAD+ and necessary to transfer reductive potential to keep your antioxidants, like glutathione and vitamin C, functional.

Because your red blood cells do not contain any mitochondria, the only way it can provide reduced glutathione is through NADPH, and since G6PD eliminates this, it causes red blood cells to rupture due to inability to compensate for oxidative stress.

Fortunately, G6PC deficiency is relatively uncommon, and can be tested for. People of Mediterranean and African decent are at greater risk of being G6PC deficient. Worldwide, G6PD deficiency is thought to affect 400 million individuals, and in the U.S., an estimated 1 in 10 African-American males have it.41