Indonesia, the world leader in palm oil production, announced in April 2022 that it would be banning exports of the tropical oil. The shocking move, which took effect April 28,1 was said to be “totally unexpected,” according to a trade group in India.2…

Indonesia, the world leader in palm oil production, announced in April 2022 that it would be banning exports of the tropical oil. The shocking move, which took effect April 28,1 was said to be “totally unexpected,” according to a trade group in India.2

Indonesia accounted for 57% of global palm oil production in 2018, amounting to 41 million tons. Only Malaysia comes close to this level of production, accounting for 27% of palm oil production that same year.3 Indonesian palm oil exports were valued at $30 billion in 2021,4 but prices jumped after news of the ban made headlines.

The retail price of cooking oil in Indonesia is an average of $1.84 per liter, which represents an increase of more than 40% in 2022.5 In some areas, it’s said that prices skyrocketed close to two-fold in the last 30 days, prompting demonstrations over the high costs.6 Indonesia’s palm oil export ban is intended to help bring down domestic palm oil prices and secure food availability in the country.

"I will monitor and evaluate the implementation of this policy so availability of cooking oil in the domestic market becomes abundant and affordable," Indonesia's President Joko Widodo said in a video broadcast.7 The move is expected to cause further spikes in prices for alternative edible oils, prices of which are already up 41% in the U.S.8 Gro Intelligence, an agriculture data-analysis firm, further predicted, "Indonesia's ban on exports is likely to further fuel global food inflation."9

Palm oil is the most widely used “vegetable,” or seed, oil in the world,10 but although it’s often lumped into the category of vegetable oils, it stands apart from others in that it’s composed of 50% saturated fats.11 While it can offer some health benefits when used as an unadulterated cooking oil, it’s often found in unhealthy ultraprocessed foods like shortening, margarine, fast foods, pizza, cookies, instant noodles and crackers.

Upon the news that Indonesia would be banning palm oil exports, prices of competing vegetable oils also spiked. Soybean oil, which is the second most used seed oil, increased 4.5% to 83.21 cents per pound, which is a record high, Reuters reported.12 Speaking with the news outlet, a dealer at a global trading firm based in Mumbai said:13

"Sky would be the limit for edible oil prices now. Buyers were banking on palm oil after sunoil supplies fell because of the Ukraine war. Now they (buyers) don't have any option as soyoil supplies are also limited."

Rising prices are just one reason to steer clear of vegetable oils such as corn oil, soybean oil, sunflower and canola oil, found in most processed foods and restaurant meals. Processed vegetable oils, rich in omega-6 polyunsaturated fatty acids (PUFAs), are a dangerous dietary factor, taking a greater toll on human health than even high fructose corn syrup and sugar.

READ:  New and Noteworthy: What I Read This Week—Edition 161

Not only have vegetable oils been linked to heart disease, gastrointestinal diseases such as irritable bowel disorder, and inflammatory conditions such as arthritis, they’ve also been linked to cancer, especially neuroblastoma, breast, prostate, colon and lung cancer.14 Writing in Medium, Maria Cross, a nutritionist with a master of science degree, discusses the science behind vegetable oils and what makes them carcinogenic. She explains:15

“There are two classes of PUFA: omega-6 and omega-3. Although functionally distinct and non-interchangeable, these two classes are perpetually engaged in a metabolic balancing act, pushing and pulling as they compete for absorption in the body. There is nothing intrinsically wrong with omega-6 PUFAs: we need them … If omega-6 fat is essential to health, it makes no sense that it can also cause cancer …

That’s why scientists believe that it is not omega-6 per se that is to blame; it’s the balance between the two groups of PUFA that is out of kilter and wreaking havoc on our bodies. We evolved on, and are genetically adapted to, a diet that provides more or less equal amounts of omega-3 and omega-6 …

With the industrialization of our diets, and the vast quantities of vegetable cooking oils that go into them, the ratio between omega-6 and omega-3 has shifted enormously and we consume up to 25 times16 more omega-6 than omega-3 …

There can only be consequences, and indeed there are: experimental data6 supports the theory that it is this skewed balance between the two PUFAs that influences the development of a tumor.”

While an essential fat, when consumed in excessive amounts, LA acts as a metabolic poison. The reason for this is because polyunsaturated fats such as LA are highly susceptible to oxidation.

As the fat oxidizes, it breaks down into harmful subcomponents such as advanced lipid oxidation end products (ALES) and OXLAMS (oxidized LA metabolites). These ALES and OXLAMS are actually what cause the damage. One type of advanced lipid oxidation end product (ALE) is 4HNE, a mutagen known to cause DNA damage. Studies have shown there's a definite correlation between elevated levels of 4HNE and heart failure.18

LA breaks down into 4HNE even faster when the oil is heated, which is why cardiologists recommend avoiding fried foods. LA intake and the subsequent ALES and OXLAMS produced also play a significant role in cancer. HNE and other ALES are extraordinarily harmful even in exceedingly small quantities.

While excess sugar is certainly bad for your health and should typically be limited to 25 grams per day or less, it doesn't cause a fraction of the oxidative damage that LA does. Processed vegetable oils are a primary source of LA, but even food sources hailed for their health benefits contain it and can be a problem if consumed in excess. Cases in point: conventionally raised chicken and pork, which are fed LA-rich grains, and olive oil.

When I interviewed Tucker Goodrich, who developed an IT risk management system used by two of the largest hedge funds in the world, then transitioned into medical research, he explained that animals typically develop cancer once the LA in their diet reaches 4% to 10% of their energy intake.

Yet, most Americans get approximately 8% of their calories from seed oils. "So, we're way over what these thresholds in the lab would suggest is a safe level of these fats based on the laboratory work in animals," Goodrich said, adding:

"We've got this huge disconnect between what the lab science tells us we should be doing and what our dietary guidelines tell us we should be doing. The scientists are saying, 'Oh, look, it's poison. It causes all the chronic diseases,' and the government's saying, 'Eat lots of it.' That's not a good thing."

Palm oil, which is produced from the pulp of the fruit of the oil palm, contains the powerful antioxidants vitamins A and E, and has been found to protect the heart and blood vessels from plaques and ischemic injuries.19 Its reddish color comes from high beta-carotene content,20 and it has a lower LA concentration than other seed oils, making it more stable against oxidative deterioration.21

However, there is controversy over palm oil, which is so widely used that it’s found in about half of frequently consumed foods and common consumer products,22 including biofuel, cosmetics and other personal care products, candles and pharmaceuticals.

Consuming palm oil in ultraprocessed foods will not do your health any favors. Further, palm oil cultivation has been blamed for deforestation and destruction of habitat for orangutans and other wildlife, along with environmental damage from monoculture plantations.23

Even “sustainable” palm oil has been described as misleading, but if you do use this oil, palm oil scorecards can help you to navigate the companies that are leading the way toward more sustainable production.24

From a health standpoint, palm oil is preferable to seed oils like soybean and sunflower because of its lower percentage of LA. However, animal fats, particularly grass fed butter and tallow, and coconut oil have the lowest LA concentrations and make the healthiest choices for cooking. So, ideally, it would be best to limit the amount of oil you use for cooking, choosing grass fed butter, instead.

Oils that should be completely avoided include the toxic seed oils that are shaded in red in the table below. That said, the dose makes the poison. So, you can theoretically use any of the oils in the table below so long as your total intake of LA for the day is less than 2% of your total calories. The higher up on the table the oil is, the more likely you will exceed your safe limit for the day. Eliminating processed foods and restaurant foods is also essential to keeping your LA intake low.

With Indonesia’s surprise ban of palm oil exports, however, you may find that palm oil and palm oil products are harder to come by, or replaced by more toxic vegetable oils. Either way, these foods should represent only a very small part of your daily diet. 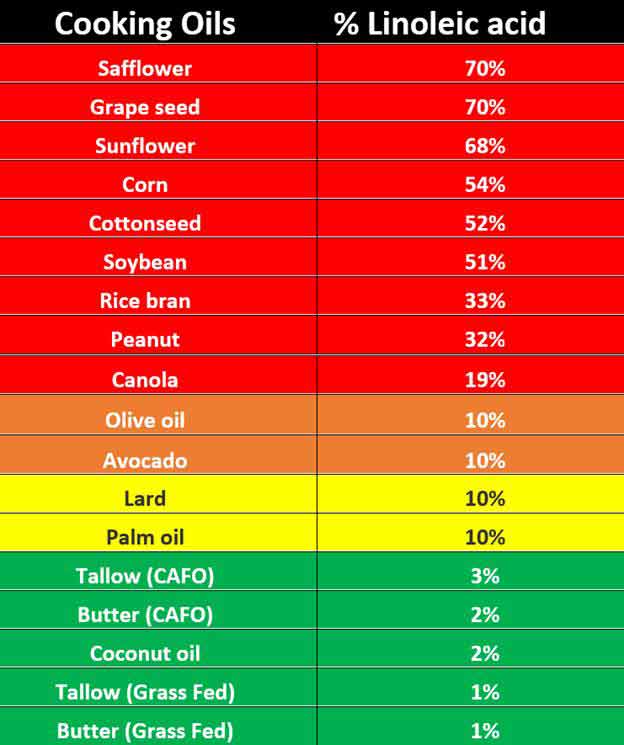