We skipped our Mythic+ logs check-in last week, so we’ll be taking a look at the past two weeks this time around, and there’s been a lot of movement, mostly the top specs detaching themselves completely from the rest!

We skipped our Mythic+ logs check-in last week, so we'll be taking a look at the past two weeks this time around, and there's been a lot of movement, mostly the top specs detaching themselves completely from the rest!

Note: The logs are based on POINTS, and not actual damage or healing, meaning they log the timed completion for the specs, with higher keys getting more points, obviously. The time in which the dungeon is completed is also a factor, but a much, much smaller one, as it grants very few points if you do it significantly faster than just any in-time completion. We're also using the Normalized Aggregate Scores numbers, for clarity, meaning the top spec is marked as 100 and then the rest are ranked in relation to that peak point.

The top ranks saw perhaps the largest pull-away from the top 3 specs, as Fire moved 20+% ahead of Windwalker in 4th and then about 30% ahead of everybody else these past 2 weeks, with Outlaw and Balance being only 5ish% behind Fire. Push weeks usually see the very meta classes get heavily focused, but this was the biggest and most glaring we've seen so far, with this most recent week calming things down a little. Other than that we see Elemental and Shadow push up 4 spots, into 5th and 6th, pushing Marksmanship and Assassination down. At the lower end we see Feral drop as Beast Mastery and Survival switch places. 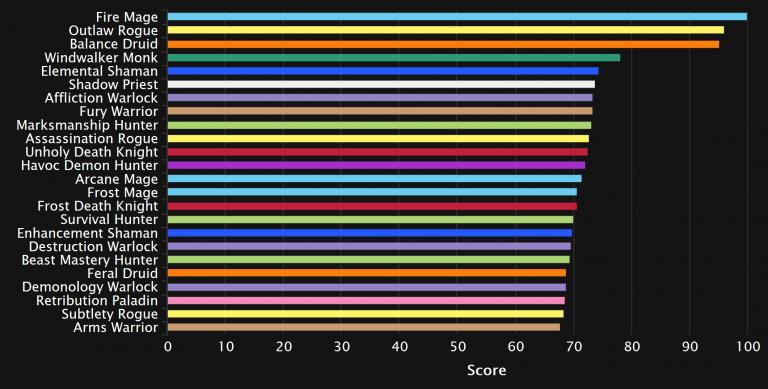 In the broader player base, Marksmanship didn't move an inch remaining in its 5th spot, while Elemental still rose the same 4 spots, and Feral still fell towards the bottom. 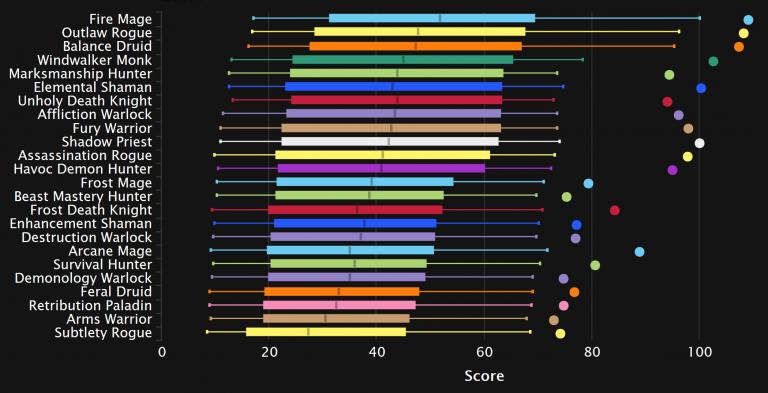 Mythic+ All Keys All Percentile Data by Warcraft Logs.

+15s actually remained quite stable these past 2 weeks, still with basically all specs being extremely close, with a little change at the top as Windwalkers took down Fury for 3rd. The other big movers were Arms and Affliction, as the Warrior dropped 6 and Warlock rose 4.

As it's been two weeks we most likely missed the traditional +20 swapping of the Subtlety ceremony, as it alternates from the literal top to bottom each week, and now we find it at the bottom again as it was 3 weeks ago, so we have to presume it was No.1 2 weeks ago. The rest of the top half is surprisingly stable, with the top 3 shuffling around a little, but we do see Shadow rise 4 spots into 4th.


For even more in-depth data for each individual key head on over to Warcraft Logs. And if you're interested in more info on the specs themselves you can always check out our class guides or our extensive Mythic+ guides as well, which have tier lists, dungeon rankings and more.