This week in Mythic+ saw Marksmanship keep its big gains from last week and even move past them, as Elemental dropped quite a bit to make room for Affliction, Assassination and Fury, while the crazy +20 trend of Subtlety Rogues being at the v…

This week in Mythic+ saw Marksmanship keep its big gains from last week and even move past them, as Elemental dropped quite a bit to make room for Affliction, Assassination and Fury, while the crazy +20 trend of Subtlety Rogues being at the very top one week and at the bottom the next continues and is freaking us out a little.

Note: The logs are based on POINTS, and not actual damage or healing, meaning they log the timed completion for the specs, with higher keys getting more points, obviously. The time in which the dungeon is completed is also a factor, but a much, much smaller one, as it grants very few points if you do it significantly faster than just any in-time completion. We're also using the Normalized Aggregate Scores numbers, for clarity, meaning the top spec is marked as 100 and then the rest are ranked in relation to that peak point.

This past week was

There was some shuffling around in our primary focus, the 95th percentile, as Marksmanship continued its rise, coming into 5th place followed directly by Affliction which jumped 2 spots. Assassination also saw a big rise this week, leaping 5 spots as Elemental gets beaten down by all the new arrivals in the top 10. The very top remained the same but Fire lost some of its big lead, as Feral makes some noise moving out of the bottom group.

Elemental is still the biggest mover, same as last week, but this time it's going back down instead of up, as it loses 4 spots and falls into 10th, as Unholy takes its previous 6th slot.

Mythic+ All Keys All Percentile Data by Warcraft Logs.

Fury busts in to the +15 top 3, and its fellow melee Assassination comes along for the upwards ride, gaining 3 spots. Subtlety drops a little as Elemental actually gains a few spots in this higher key, and Unholy also has a good time with this week's affixes, rising 2.

The extremely weird trend of Subtlety going from the very top to the bottom and back again continues in +20ies this week, as the Rogue spec is back at the bottom, only 1 spot from dead last after its No.1 spot last week! Unfortunately for Rogues, Assassination suffered a similar fate as it dropped from the top 5 to 14th, but at least Outlaw is still very stable and now in the top spot. 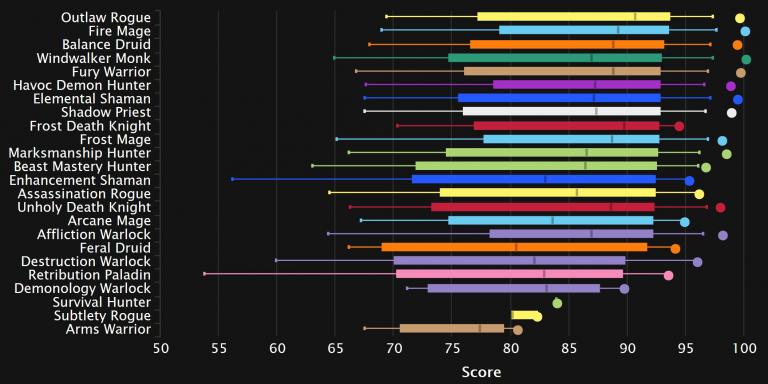 
For even more in-depth data for each individual key head on over to Warcraft Logs. And if you're interested in more info on the specs themselves you can always check out our class guides or our extensive Mythic+ guides as well, which have tier lists, dungeon rankings and more.