Day 16 presented a lot of Jailer progress, and saw a fair chunk of his HP reduced, but we only saw a little bit more of phase 3. And it’s looking pretty insane, with mechanic after mechanic just demanding everything out of the players.

Day 16 presented a lot of Jailer progress, and saw a fair chunk of his HP reduced, but we only saw a little bit more of phase 3. And it's looking pretty insane, with mechanic after mechanic just demanding everything out of the players.

Before we get into the top two guilds, however, we should take a look at the battle that's been brewing over World 3rd, as our usual bronze guild, SK Pieces, is getting challenged pretty hard for the spot - first by Skyline and then by Method. It's all going down on Rygelon at the moment, as Skyline have actually been in the lead on the boss for quite a while, sitting at a 39% best to SK Pieces' 46, and then after they downed Lords of Dread World 6th, Method also joined the party and pretty quickly got Rygelon down to 40% as well! SK Pieces took that a little personally though, as they did a classic WoW boss "ENOUGH!" move at the end of their raid day and took Rygelon down to 22%, retaking the lead. It's going to be a very interesting day today seeing those 3 battle it out for the honor of seeing the Jailer first after the top two guilds! Aster is also doing Rygelon progress, but we don't quite have as up to date data for them, and they've spent the least time on the boss, so it's safe to assume they're not quite as close as the other three.

Back to the very top, Echo had a productive day as they re-cleared, did a lot better on Anduin than Liquid did, but during the run their greatest weakness in Shadowlands was revealed:

We still struggling with artificer ever since Castle tho, unluck.

Quick lunch then we bang out the last 2 into Jailer!

We're only talking a few wipes here, but you could see them getting a little upset as the third boss of the Sepulcher kept wiping them with their new double legendary toys (which were actually part of the problem, as the new increased DPS timings messed their strategy up). But as you'd imagine they recovered quickly and spent the rest of the day on the Jailer. As they caught up to Liquid little by little, they started to see the horrors of phase 3, or rather not that many of them, as all their arrivals in the phase lasted very shortly. They ended their day on a 48.9% best. You can see Azeroth's health at either the top middle of the screen or at the bottom right of the skill bar in the following videos.

They called it a night at their usual time, leaving the rest of the day to Liquid, who were already fairly far ahead in terms of boss percentage, sitting at a 41% best when Echo left. During the EU night is when we saw just how insane phase 3 of the Jailer is, with the Azeroth health mechanic and the fact that you basically needed all 20 players alive, the World Soul at around max health to even get into the phase properly, as the soak needed on the Jailer's Desolation ability is intense.

READ:  Changes to Scrips and Tomestones in 6.0

However, even when Liquid managed to get into phase 3 the proper way, everyone alive, Azeroth topped up, it still wasn't enough:

They did manage to get better and better at phases 1 and 2, ultimately getting a number of perfect pulls into phase 3, managing the soak... and that's when things got interesting. It's not enough that the entire room starts falling apart, that there's a Defile cast happening, that you still need to heal Azeroth, but even the adds that spawn in the phase are no joke, as they can't be DK gripped together or knocked down, AND need to have casts interrupted, AND there's a fairly solid number of them:

That was the best pull of the day, percentage-wise, with only 1 being slightly better with the adds a little later, and that one was ruined by a silly technical issue with raid markers:

The very end of Liquid's raid day wasn't quite that great, as they had to call it an early night by around 2 hours, since they not only had to switch hotels (as they weren't expecting the race to go on this long), but their main tank also had to fly back to Scotland!

also, hilariously the cheapest option to ferry the raiders to the new hotels is a fucking stretch hummer limo HAHAHAHA

Today is going to be a big one for Echo in particular, as they will be reaching Liquid's pull counts and time spent on the boss, and seeing for themselves whether they can think of better ways to mitigate the phase 3 insanity. They've now come out with new strategies that led to World First's twice, on the Lords of Dread and Rygelon, so we might be seeing some magic on the Jailer as well. Meanwhile Liquid have really gotten the first two phases down and will be seeing more of phase 3 more frequently, so it really is anyone's race at this point. It'll also be interesting to see whether Blizzard nerf or change any part of the fight, as it's not exactly looking impossible, but I wouldn't say it's looking very possible either. But these guilds live for the impossible possibilities (or the possimpable, to borrow a term), so let's see what happens! 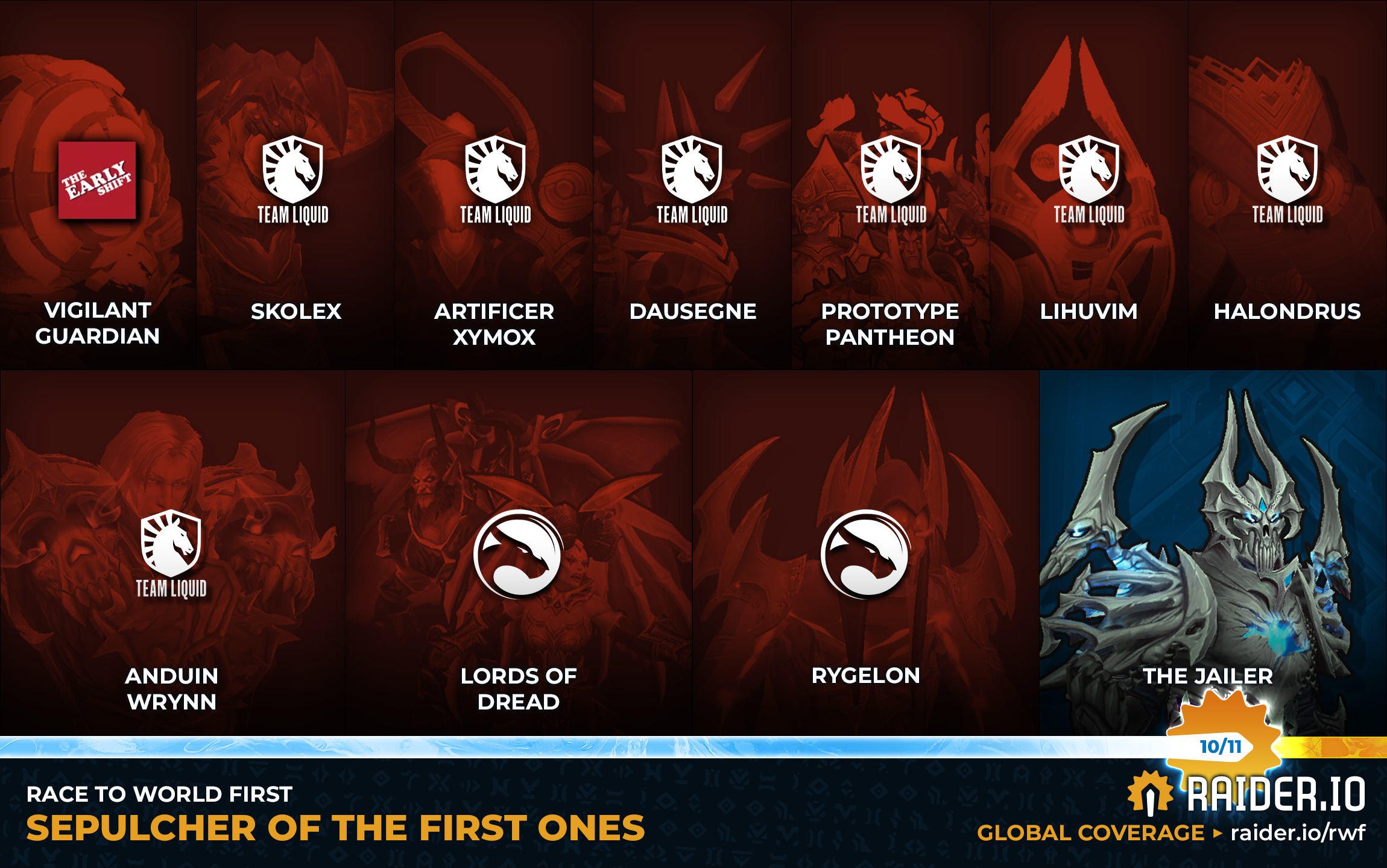