We have some nice-looking fan made maps to check out today, with a pre-third war (Eastern) Lordaeron and some more current ones, all made in Inkarnate!

Two players recently took to cartography, and ejl42’s map of Lordaeron before the thir…

We have some nice-looking fan made maps to check out today, with a pre-third war (Eastern) Lordaeron and some more current ones, all made in Inkarnate!

Two players recently took to cartography, and ejl42's map of Lordaeron before the third war is the most interesting, with some creative license in there for smaller settlement names and setups, but it's all based on available knowledge and looks very... green:

And then there's the more time-accurate Kingdom of Stormwind map: 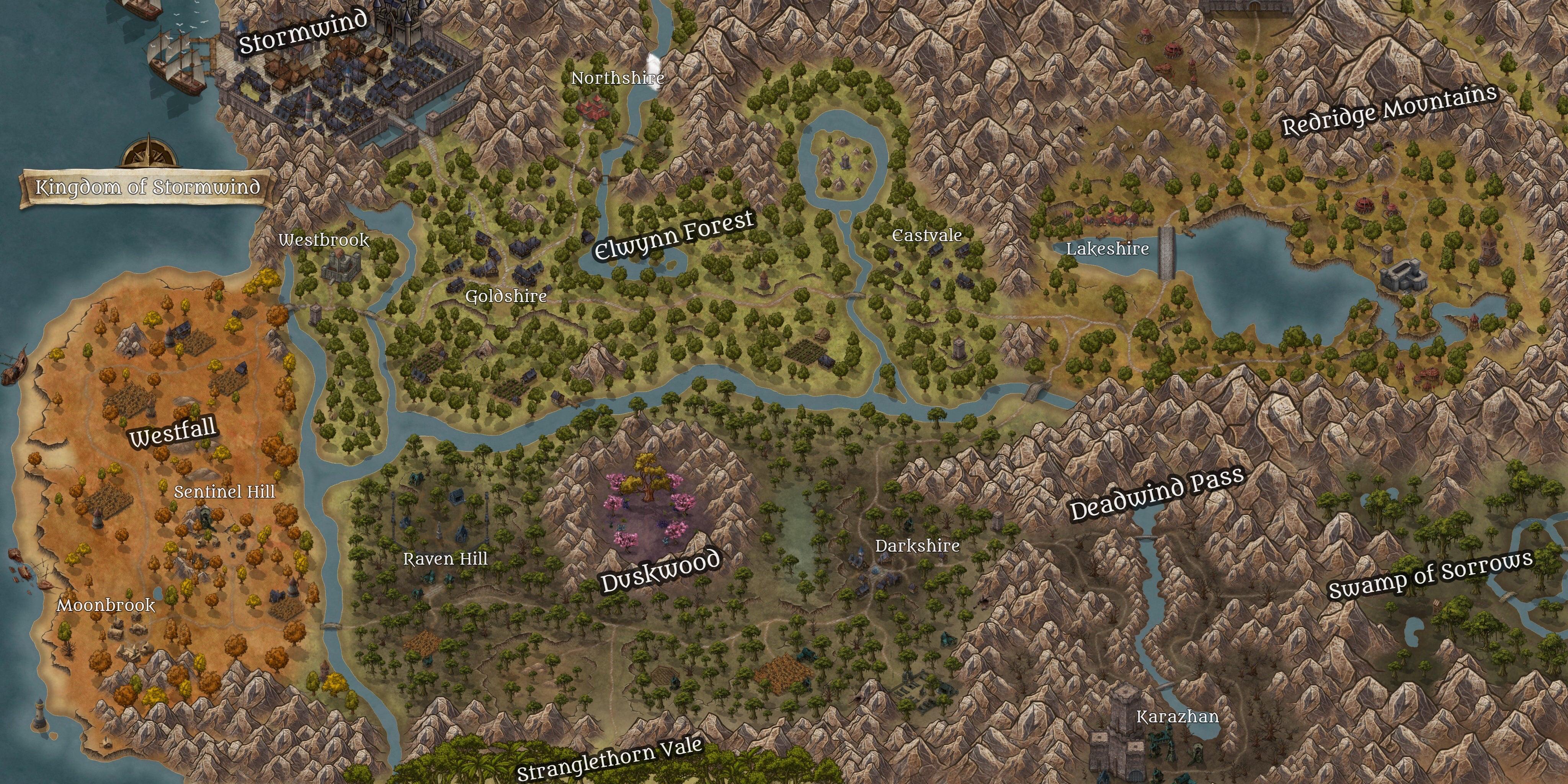 With some notes from ejl42 on both:

Thank you for the appreciation on my recent Kingdom of Stormwind map. This is another I did of Eastern Lordaeron prior to the Third War. You’ll notice names like Vandermar Village and Hasic which are somewhat canon. Brookridge and The Greatwood I put in due a lack of lore representation. Enjoy!
...
I made these maps with the intention of designing a hearthstone/DND crossover style tabletop RPG based in alternate reality where the Lich king corrupts the Wrynn family instead of the Menethils and so the butterfly effect after that would change the story afterwards
...
Hasic is suggested to be on the Eastern seafront... so there’s a bit of assumption on my part that actually the DK area is an adaptation of Hasic
...
Parts of it were from looking at the existing maps, some parts were from memory of the area in game.. sadly there’s no tracing option ?
...
Thanks, I intend to! I love it, it just takes a long time. This may have taken me in the region of 15 hours as I wanted to get in a lot of smaller details even down to the angles of beaches etc [for the Lordaeron one]
...
In terms of WoW yes it was added in WOTLK however Stormwind harbour was noted as early as Warcraft 1 as it was sacked by the Horde in the First War. It’s sort of like an anti-retcon that it was only added later in the WoW timeline.

We then have two actual zone maps by Grazzbek to check out, with Elwynn and Durotar getting the Inkarnate treatment, also with some added original spots as well. 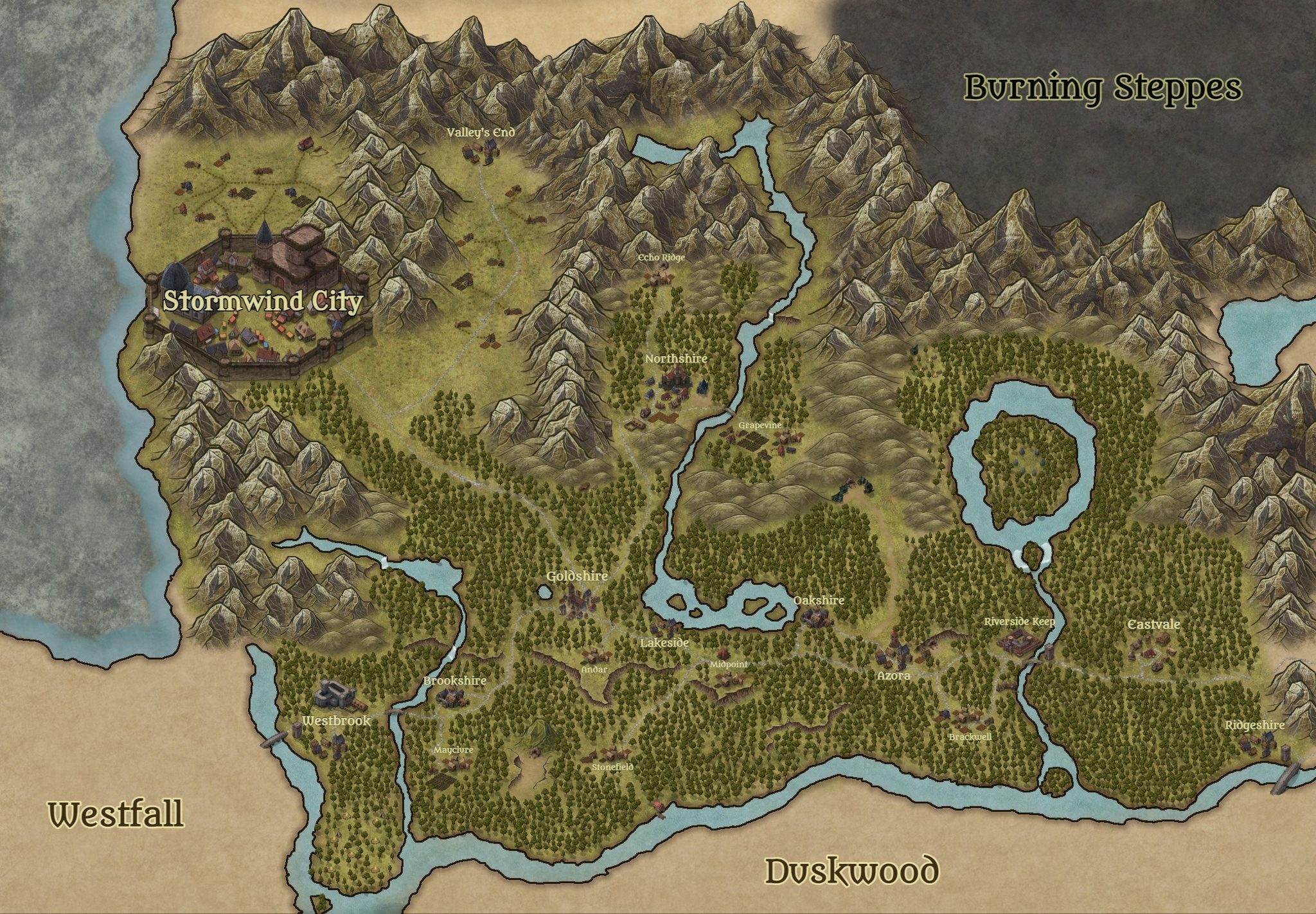 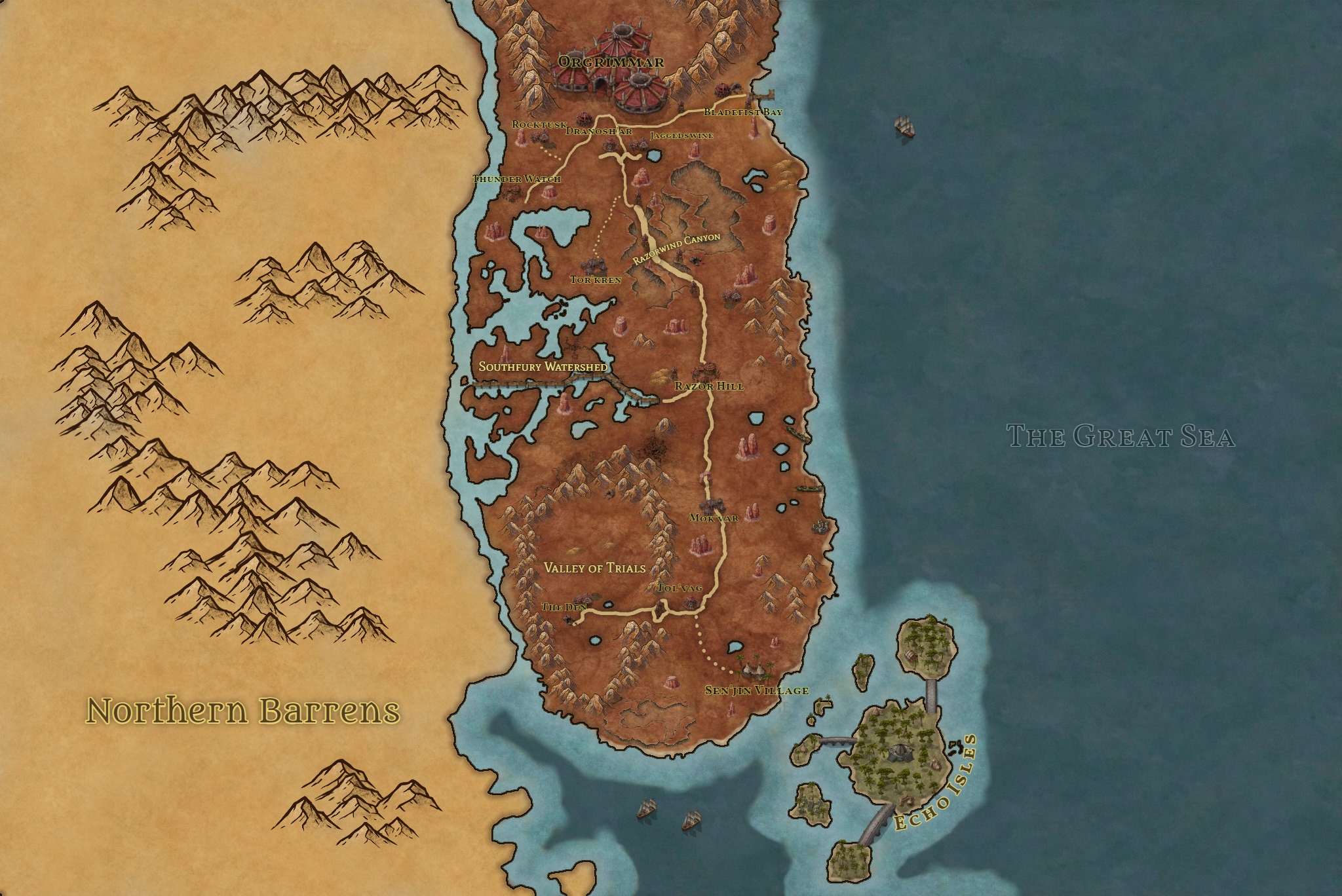 I'm DMing a Warcraft DnD campaign and have been recreating maps to try and scale the world up and flesh it out more. This is one of four completed so far. Guildies told me to post these to the wow subreddit so...I guess I'll start with one of the least changed ones.
...
[For Stormwind] That's just the stamp I used. The stamp is supposed to represent a city. Kinda gotta work with what ya got.
...
[On some of the settlements]Made them up myself. The scaling I used made the distance between the settlements of Elwynn far too large for there only to be Westbrook, Goldshire, Northshire, Eastvale, and Stormwind
...
People seemed to like the Elwynn Forest map so here's Durotar.
Some changes:

Some really nice work there and it's always great to see more of Azeroth mapped out, even with some creative personal additions to flesh it out even more!