Light showers however will descend on Western Australia, as a trough clips southwestern parts of the state.

Onshore winds will deliver the odd shower to western Tasmania, while a low in the Tasman directs a large swell towards the NSW coast. 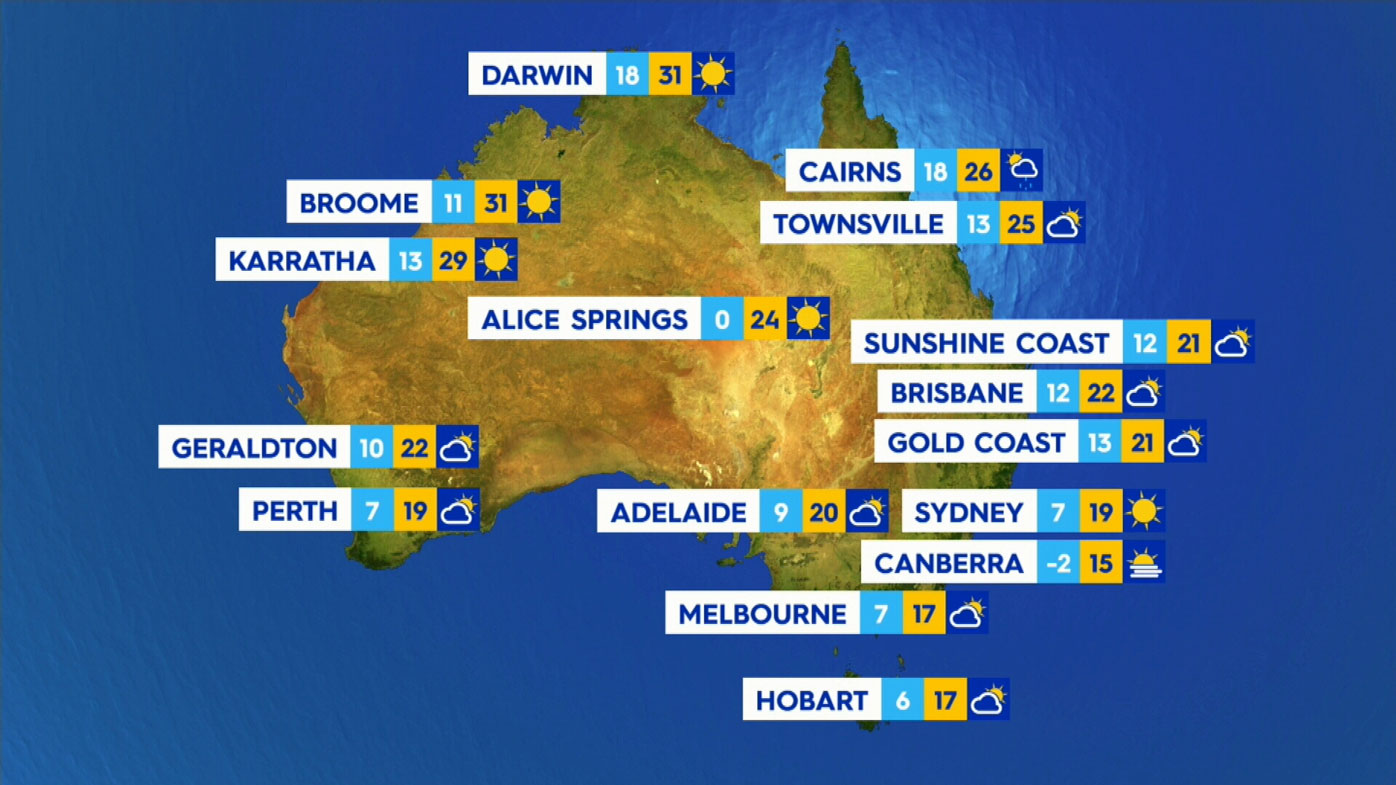 A marine wind warning is in place for the Northern Territory, WA, Queensland, Victoria and Tasmania.

Widespread morning frost and a mostly sunny day. Fog then sunny, cool-to-cold in the southwest.

Sunny in Sydney, with a low of 7C and a high of 19. Areas of fog in the early morning, mainly in the west. Areas of morning frost in the outer west. Light winds.

Areas of fog and frost in the morning in Canberra, with a chilly low of -2C and a top of 15. Mostly sunny afternoon. Light winds.

A frost warning has been issued for the Mallee, Northern Country, North East and East Gippsland forecast districts.

Partly cloudy in Brisbane, the mercury ranging between 12 and 22C. Winds S/SW 15 to 20 km/h tending S/SE in the middle of the day then becoming light in the early afternoon.

Mostly sunny in Perth with light winds. A low of 7C is expected to climb to 19C.

Mostly sunny again, cool-to-cold in the southeast and central. Mostly cloudy, mild-to-warm in the west. Cloud increasing, cool-to-mild in the north.

Mostly sunny conditions in Adelaide, with the thermometer to plunge to a low of 9C and peak at 20C. Winds N/NE 20 to 30 km/h tending N/NW 25 to 35 km/h in the morning then becoming light in the evening.

Partly cloudy in Hobart. Slight chance of a shower in the afternoon and evening.

Mostly sunny, warm in the NW Top End. Clearing showers, mild-to-warm in Arnhem. Sunny, mild over the interior. Frost then sunny, cool-to-mild in the south.

Sunny in Darwin, with temperatures of between 18 and 31C.

A fire warning has been issued for the Darwin and Adelaide River fire forecast areas.