Tom Holland received the sweetest birthday message from his girlfriend, Zendaya, for his big 26th. On June 1, his Spider-Man costar shared a cuddly black-and-white pho… 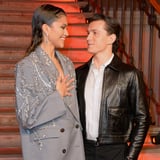 Tom Holland received the sweetest birthday message from his girlfriend, Zendaya, for his big 26th. On June 1, his Spider-Man costar shared a cuddly black-and-white photo via Instagram of the two looking quite smitten. "Happiest of birthdays to the one who makes me the happiest," Zendaya wrote in her caption alongside a heart symbol.

Her post is the latest of the Hollywood couple's adorable PDA moments. As if coordinating outfits for red carpet events and strolls around the city weren't cute enough, Zendaya and Holland upped the ante on their romantic gestures in February when they wore matching jerseys to a New York Rangers hockey game.

The pair's support for one another runs deep as their bond goes years back to when they starred in their first Spider-Man movie together. But their close relationship sparked dating rumors in July 2021 when the two were photographed sharing a kiss in Los Angeles.

They finally addressed the speculation in Holland's November GQ cover story when they opened up about wanting privacy from the public when it comes to their romance. "One of the downsides of our fame is that privacy isn't really in our control anymore, and a moment that you think is between two people that love each other very much is now a moment that is shared with the entire world," Holland told the outlet.

But even as fans continue to pry into Zendaya and Holland's relationship, it seems they've figured out the balance between keeping their most intimate moments to themselves and sharing what they're comfortable with. Either way, we support the blossoming romance between the friends-turned-lovers 100 percent.