Netflix’s new movie Stowaway boasts a star-studded cast, a space setting, and a white-knuckle premise. Once you’ve watched through the whole movie, though, you might be wondering if there will be any more story to come? There’s no word yet on whether … 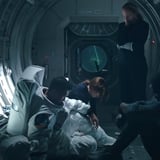 Netflix's new movie Stowaway boasts a star-studded cast, a space setting, and a white-knuckle premise. Once you've watched through the whole movie, though, you might be wondering if there will be any more story to come? There's no word yet on whether or not Netflix will make a sequel to Stowaway, and we probably won't hear any news for quite a while.

The premise of the movie is pretty straightforward and self-contained. As a three-person crew heads off on a mission to Mars, they discover an accidental stowaway on board their spacecraft. Too late to turn back to Earth and with resources spread too thin for survival, the crew is forced to make a devastating decision, but their medical officer refuses to join her crewmates' decision. Anna Kendrick, Daniel Dae Kim, and Toni Collette play the three crew members, with Shamier Anderson as their unintended stowaway.

For the moment, there's no indication that Netflix plans on this being any more than a one-and-done standalone movie. It's not based on any pre-existing property, like a TV show or a book series, that would already have one or more sequels built in. There also are practical concerns to consider, like scheduling and actor availability. Kim, for instance, has multiple major TV roles at the moment, while Kendrick and Collette are both highly sought-after actors and producers.

Netflix doesn't seem to make sequels of its movies all that frequently, except for the very buzziest titles. Stowaway, in particular, feels like the kind of movie that's extra-attuned to 2021 (even though it was filmed in pre-pandemic in 2019).

"The thing that feels really relevant is less the isolation of it and more that kind of problem-solving part of your brain that we were all engaging so vigorously in the first couple months of the pandemic," Kendrick told Entertainment Weekly. "Just that constant problem-solving of, 'wait, okay, how do we fix this?' And just when it seems like you're onto something, there's some very obvious fundamental problem." For now, Stowaway is just one movie, out April 22. Will there be more stories to come? Only time will tell.