JoJo Siwa’s coming out kicked off in a very 2021 way — on TikTok. In a rainbow-bedazzled hoodie and matching hair bow, she lip synced to Lady Gaga’s inclusive anthem, ‘Born This Way’.She didn’t have to say she was out. Her fans — all 54 million of t…

JoJo Siwa's coming out kicked off in a very 2021 way -- on TikTok. In a rainbow-bedazzled hoodie and matching hair bow, she lip synced to Lady Gaga's inclusive anthem, 'Born This Way'.

She didn't have to say she was out. Her fans -- all 54 million of them across TikTok, YouTube and Instagram -- heard her. (The 17-year-old later confirmed that yes, she had come out, in a follow-up video thanking her audience for their support.)

There's no precedent for what JoJo did -- no star of her calibre, at her age, whose audience is made up of mostly kids and tweens, has come out so publicly. And JoJo, with her unflappable joy, is an example unlike any LGBTQ young people have had. 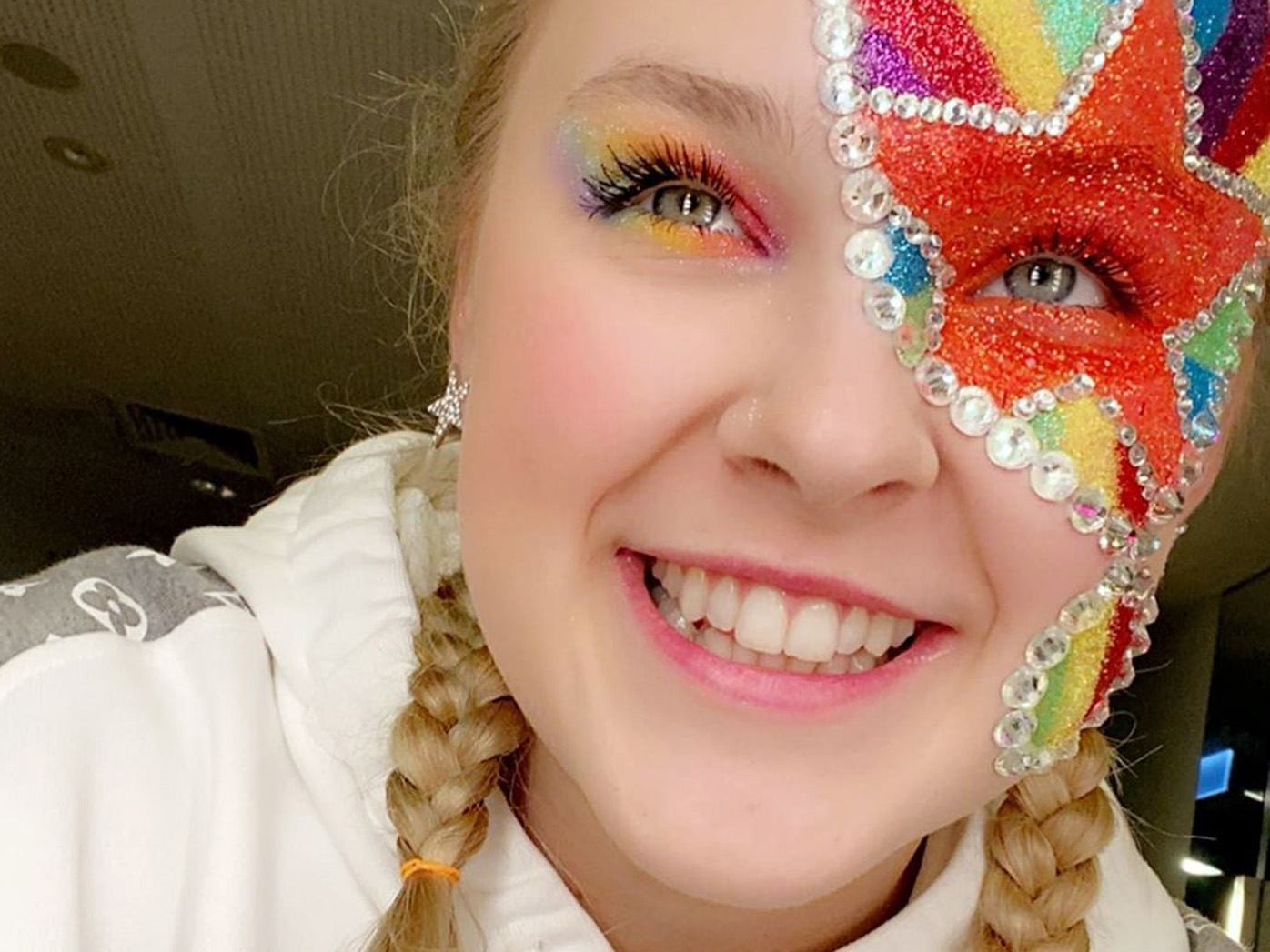 "JoJo's pride in her identity and her confidence in shrugging off negative responses indicates that her social media presence will foster a sense of supportive community for LGBTQ youth," said Traci Gillig, an assistant professor of communication at Washington State University who studies the impacts of LGBTQ+ representation on young people.

"She's one more voice -- and a big one -- communicating to young LGBTQ people that they are loved."

Now, LGBTQ kids have one of the world's biggest child stars in their corner.

JoJo says she's the happiest she's ever been

For the uninitiated, Joelle Joanie Siwa is a ray of unrelenting, occasionally grating sunshine. She's rarely seen without her gravity-defying ponytail tied neatly with an oversized bow. She exudes innocent, inexhaustible positivity. She delivers affirmations to her young viewers in enthusiastic screams. 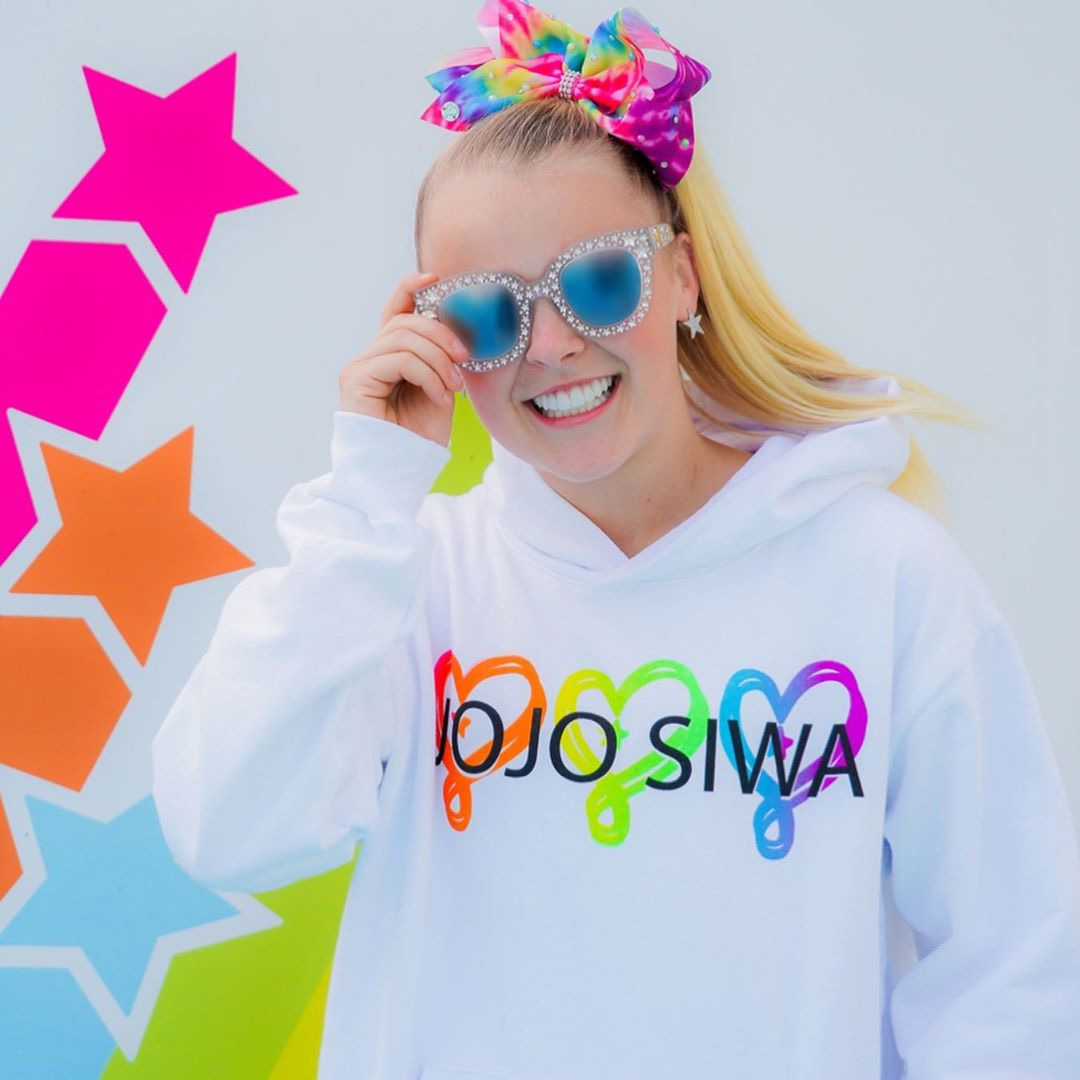 In 2021, JoJo is at the height of her powers. She's a pop star, published author and alumnus of the Abby Lee Dance Company. Her name is used to sell bedazzled unicorn clothing, pink pint-sized furniture, face masks and, of course, bows. She's made millions from her merchandise, tours and uber-popular social channels. She lives in a mansion adorned with images of her face and drives a BMW convertible that bears her smiling face on the hood.

Because JoJo's persona has been monetised (and because most of her audience is young children), she keeps fans at a distance. She invites cameras into her home, and while she's reliably giddy and entertaining, she's also playing a part.

READ:  How Kyle Sandilands overcame hardship and homelessness to find his happily ever after

Her coming out, though, was devoid of all pretence.

JoJo delivered a statement on her coming out on Instagram Live last week.

Wearing a black Time 100 hoodie (a subtle flex; she was on the magazine's list of the world's most influential people last year) and an understated bow, her voice lowered to a register she rarely uses online. She seemed genuinely touched by the support she received.

Someone on Instagram Live asked her how she identified. She answered candidly -- she doesn't know.

"I wanna share everything with the world; I really do," she told her rapt audience. "But I also want to keep things in my life private until they're ready to be public."

Still, she's "never, ever, ever been this happy before," she said, beaming.

"I think coming out has this stigma around it, that it's a really, really, really scary thing," she said. "It's not anymore. There's so many accepting and loving people out there. Of course people are gonna say it's not normal, but it's your normal."

Coming out is still really, really, really scary for many LGBTQ kids. A Human Rights Campaign survey found as much -- just over half of 10,000 teen respondents said they were out to their families. The teens who had come out to their immediate families reported feeling happier than those who had not.

JoJo also has the advantage, of course, of being rich and popular online. She could lose a lot by coming out -- sponsorships, fans, some income -- but the non-famous kids who watch her videos stand to lose a lot more. 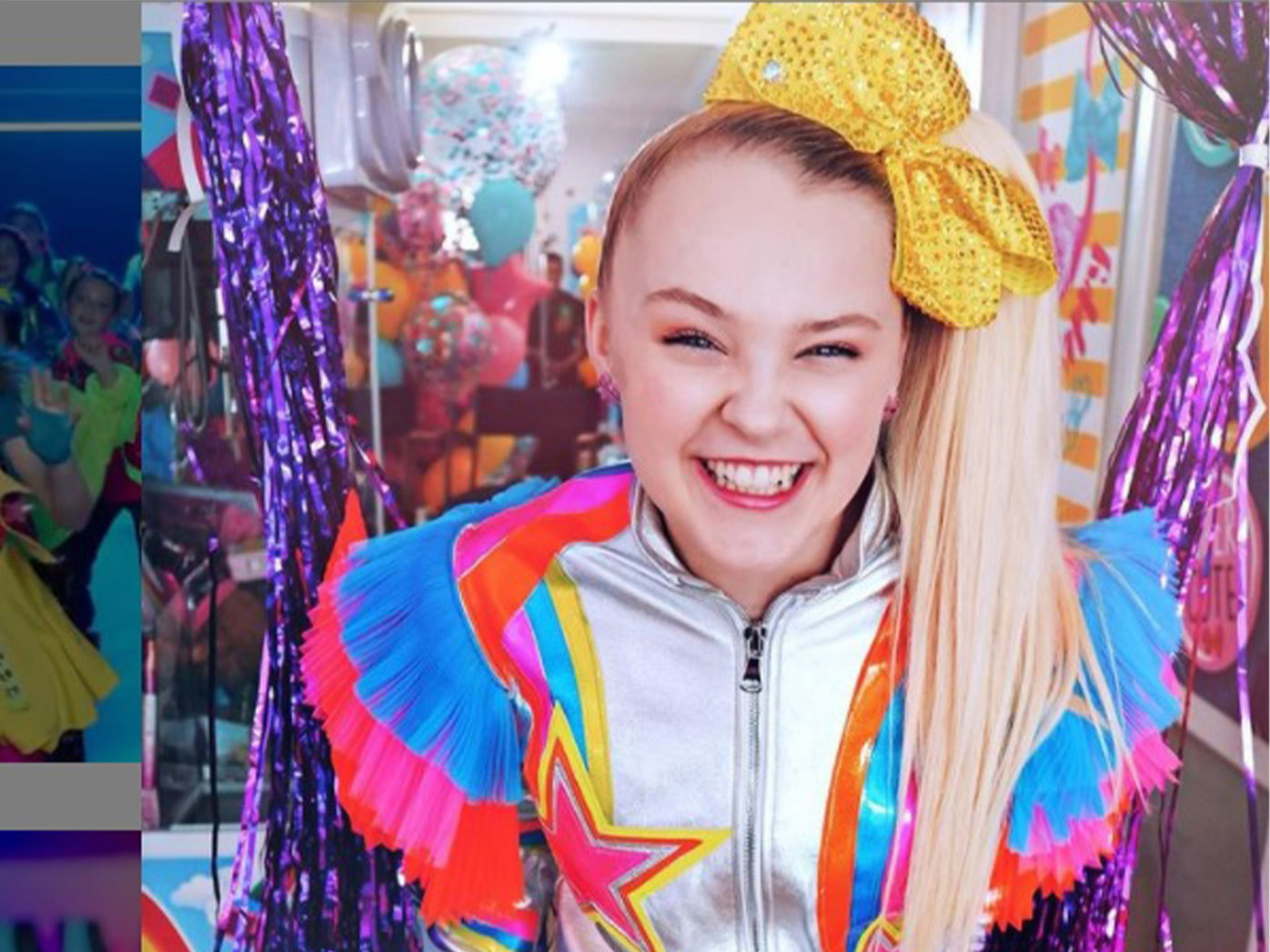 But seeing someone like JoJo, who at 17 has already conquered worlds, come out in a very public way is still meaningful, said Jill Gutowitz, a culture writer whose upcoming book, Canon, examines the impact of queer women in pop culture.

"Queer adults have only just started seeing themselves represented by highly visible celebrities in the past few years, but teens and children -- Siwa's audience -- still don't have many out, queer, highly visible pop culture figures to look to," Gutowitz told CNN in an email.

Now, they've got one of the most visible kids in the world as an example.

"I've heard many people say that coming out with such a massive platform is 'brave,' and in a way that's true, given our culture's history of burying or erasing queerness," she said.

"But I don't think JoJo Siwa came out because she was doing something 'brave' -- I think she came out because this is who she is, and it's important to her to share all of herself with her fans."

In that way, JoJo's living the same values she extols in her messages to fans: She's being her truest self.

Gillig, an assistant professor of communication at Washington State University, said JoJo's coming out is unlike that of any other celebrity.

"JoJo is a rare example of a young person who has been in the media spotlight for years before coming out as LGBTQ while still an adolescent," Gilig said.

It's impactful, too, for parents to see the support JoJo's parents have shown her publicly.

In her follow-up video, JoJo ends with something her dad told her earlier: "'Hey man, love is universal!'"

Jessalyn Siwa, JoJo's mom who appeared with her daughter for two seasons on Dance Moms, supported JoJo on Instagram: "The best thing you can be is yourself and the best gift you can give someone is to love them for exactly who they are always and forever."

She's got no time for haters

Whether JoJo makes her identity a bigger part of her empire remains to be seen, but her announcement itself was already a major step for children's entertainment. It was only in 2018 that a major studio released a film centred on a gay teen love story -- Love, Simon, whose high school protagonist was closeted for much of the film. Tropes of queer protagonists have been upturned in shows like Sex Education, Riverdale and Schitt's Creek, but those series are geared toward teens and adults.

READ:  Best Film Scores: From ‘Titanic’ to ‘The Princess Diaries’

JoJo came out in her own way, on her own terms -- and fans are largely standing behind her, as is Nickelodeon, which signed JoJo to a talent deal in 2017. When reached for comment by CNN, a representative referred to Nickelodeon's Instagram post -- a photo of JoJo with the caption "Never been more proud."

Her admission still courted, as JoJo calls them, "haters." Some followers -- many of them parents -- claimed their children would never watch another one of her videos.

To one user, she responded with typical pep -- "Okay!"

The hate became dangerous at one point, though. JoJo said her house was "swatted," meaning someone called a SWAT team to her home on a fake call. The incident scared her, she said on her videographer's Instagram livestream. 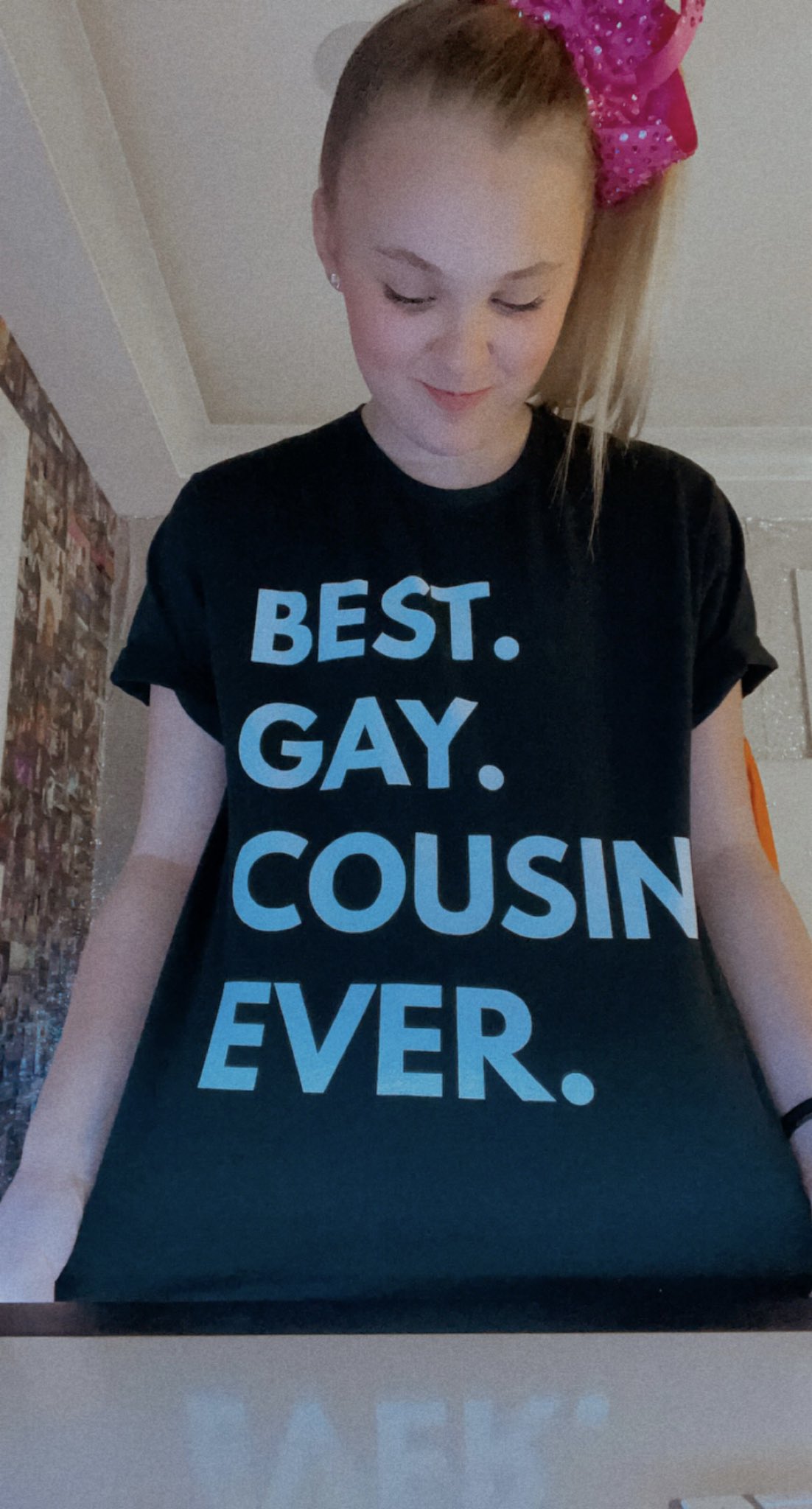 Still, Gillig said, "the long-term impact of her coming out will be undoubtedly positive for LGBTQ people."

On Instagram Live, JoJo's joy bubbled over. She giggled, she grinned, she used "awesome" in every other sentence. She joked that her face started to cramp up from smiling so much.

Not even the haters could dim her glow.

"Why would she, with the platform and power she has, want to hide a huge part of herself just to make a few hateful people comfortable, when her whole message is to be loudly, proudly yourself?" Gutowitz said. "It doesn't make sense for her, and she doesn't have to do it. And that's a powerful message."

Shortly after her buoyant Instagram Live address, JoJo took off to Canada, where she'll stay for months to film a secret project. When and if she's ready, she'll tell more of her story to her largely adoring public. But for now, she's said enough.

Her happiness speaks for itself.