Handler confirms the two finally spoke after going back and forth on social media.
Looks like Donald Trump … or, Chelsea Handler’s total disdain for him, at least … might have rekindled the flame between the comedian and ex-b… 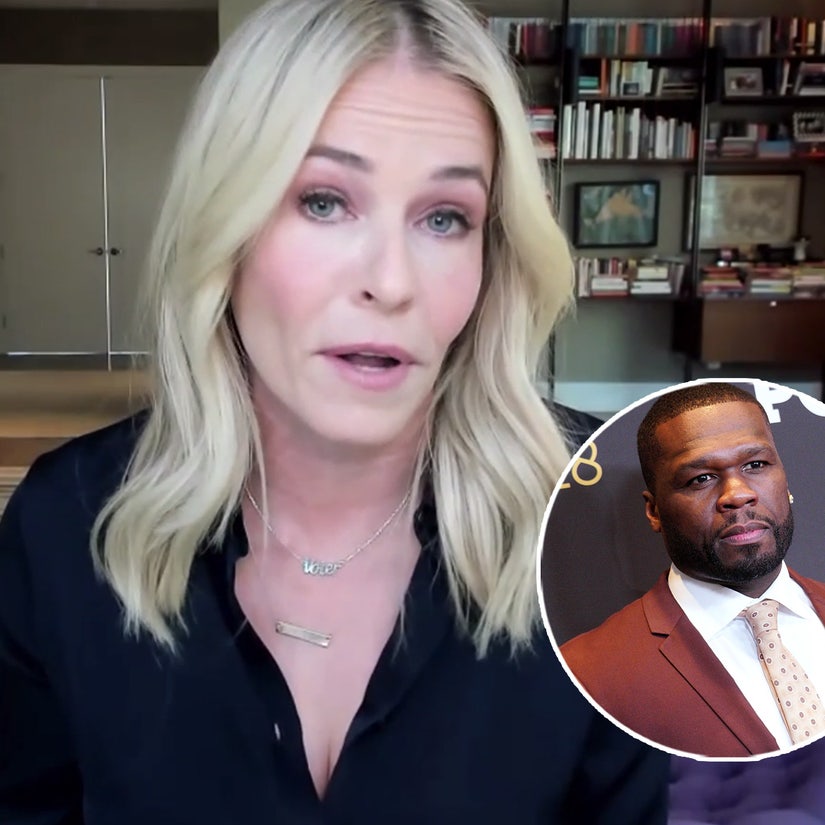 Handler confirms the two finally spoke after going back and forth on social media.

Looks like Donald Trump ... or, Chelsea Handler's total disdain for him, at least ... might have rekindled the flame between the comedian and ex-boyfriend 50 Cent.

After the rapper pledged his support for Trump because he wasn't a fan of Joe Biden's proposed tax plan, he and Handler went at it on Twitter. She further called him out on The Tonight Show Starring Jimmy Fallon, saying, "I am willing to seal the deal in more ways than one if he changes his mind and publicly denounces Donald Trump. I might be willing to go for another spin if you know what I'm talking about."

Now, in a new interview on Monday's episode of The Drew Barrymore Show, Handler seemingly confirmed he'll be voting Biden as she said she might have to make good on her offer. 50 came up as she and Barrymore spoke about Handler's dating life.

"I may have to get back together with 50 Cent at this point because I promised him that, we spoke the other night and I said jokingly like, 'I'm ready to get back together or possibly go for another spin,' I know this is a morning show so I won't go too deep into that," she told Drew.

"And he was like, 'Hey, were you serious about what you wrote about us getting back together?' And I was like, 'Yeah, totally, I am open to anything buddy,'" she added. "So who knows, maybe I'll get back together with 50. He actually got a kick out of me, he gets my humor and he likes it and finds it attractive and not like a turn off."

READ:  The 2021 Grammys Have Been Postponed Until Further Notice

She added that she does want to "experience big love" and hopes it's in her "near future."

According to reports, taxpayers in New York City, New Jersey and California who earn more than $400,000 could see their combined state and local rates rise above 60%. In mid-October, 50 made it clear he'd be putting his money first when it came to the election.

The rapper quickly started trending over his support and it wasn't long until Handler jumped into his replies -- tweeting, "You used to be my favorite ex-boyfriend."

50 didn't love that, joking that the election was "effecting [sic] my love life now." He added, "@chelseahandler I love ya Gator, don't let Trump and Joe Biden come between us girl."

Handler, however, wasn't in much of a joking mood herself. "Hey f--ker!" she replied. "I will pay your taxes in exchange for you coming to your senses. Happily! Black lives matter. That's you, f--ker! Remember?"

After Handler's appearance on Fallon, 50 tweeted out a clip about her promise. He added, "a what, another spin F--k Donald Trump, I never liked him. for all I know he had me set up and had my friend Angel Fernandez killed but that's history. LOL." The last line there is a quote from "Scarface."

She responded, asking him flat out whether this was a change in tune. "Honey- does this tweet me we can count on a vote for you for @JoeBiden?" she asked. "I'm happy to discuss this with you privately. My phone number is still the same. Your's isn't. I've tried calling you."