Yes, there really have been cowboys in the streets of Philly. Netflix is riding on in with the Hollywood take in director Ricky Staub’s Concrete Cowboy, which stars Stranger Things’ Caleb McLaughlin and the one-and-only Idris Elba. While the coming-of… 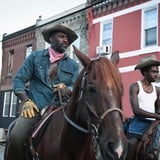 Yes, there really have been cowboys in the streets of Philly. Netflix is riding on in with the Hollywood take in director Ricky Staub's Concrete Cowboy, which stars Stranger Things' Caleb McLaughlin and the one-and-only Idris Elba. While the coming-of-age film itself is a fictionalized drama, it's actually based on a real organization called the Fletcher Street Urban Riding Club, which has historically been an urban-based community of Black cowboys in north Philadelphia.

The film is based on Greg Neri's Ghetto Cowboy, a 2011 young adult (slash middle grade) novel about a 12-year-old boy named Cole who moves in with his father. Cole soon learns that his dad is part of a Philly Black riding community that steers kids away from drugs and gangs by teaching them how to care for horses. Before penning his book, Neri himself became inspired by Philadelphia's urban cowboys after reading a profile about them in Life Magazine.

Concrete Cowboy doesn't stray too far from the book it adapts. In the movie, 15-year-old Cole (McLaughlin) gets expelled from his school in Detroit. Sent to Philly, he moves in with his father Harp (Elba), who just so happens to have a horse in his living room. Harp rehabilitates horses for inner-city riders at the Fletcher Street Stables. Cole is brought on to muck the stables and, not before too long, grows fond of the horses. But his new relationship with his father later becomes tense when he befriends his troubled cousin Smush (Jharrel Jerome).

The Fletcher Street Urban Riding Club is an actual nonprofit in Philadelphia that emerged from a century-long tradition. It's been embraced as a safe haven for locals whose community has been impacted by violence and poverty. Rider Ellis Ferrell, who's now 82 years old, formally established the club in 2004, but initially had trouble finding the horses a permanent home. His group eventually set up corrals on what's currently the open Fletcher Street lot. However, things took a turn in 2008 when the Society for the Prevention of Cruelty to Animals came in to investigate anonymous animal abuse claims - club members have since disputed claims of mistreatment. The city of Philadelphia ended up bulldozing the club's corrals and petting zoo and forced it out. After the club spent years searching for a place to settle, a former landowner later gave the organization the deed to three lots on W. Fletcher Street in 2014, and community members helped clear debris from the area to make it habitable for the horses.

The Fletcher Street Urban Riding Club officially became a nonprofit by 2015, promoting inner-city horsemanship, equine therapy, and academic excellence. Today, the club is situated in the Strawberry Mansion neighborhood of North Philadelphia. Ferrell and his team of volunteers look after the land and horses at the stables. The land has been paid off and donated, but operation costs are self-funded. And not all is in the clear in terms of land allotment. The Philadelphia Housing Authority has plans to turn Fletcher Field, which has been used for grazing and riding, into an affordable housing development. The club's status remains in limbo as it tries to establish a permanent home and convince the city of Philadelphia to preserve Fletcher Street heritage.

The organization currently has a GoFundMe page devoted to raising funds for maintenance. You can follow updates about FSURC on Instagram @fletcherstreeturbanridingclub.