The much-anticipated sequel to Black Panther finally has a title and a release date! Black Panther: Wakanda Forever will be released on July 8, 2022, but we still don’t know much else about the upcoming movie. One of the (many) lingering questions abo… 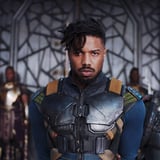 The much-anticipated sequel to Black Panther finally has a title and a release date! Black Panther: Wakanda Forever will be released on July 8, 2022, but we still don't know much else about the upcoming movie. One of the (many) lingering questions about the sequel is whether or not Michael B. Jordan will return in some form as Erik Killmonger, the antagonist of the first movie. Right now, unfortunately, we have absolutely no idea.

As it stands right now, we know that at least some of the original cast will be back. Between 2018 and 2019, at least three of the original cast members confirmed their involvement in the sequel. Deadline reported that Letitia Wright would reprise her role as Shuri, while Danai Gurira told MTV that she will be back as Okoye. Plus, when Collider asked Martin Freeman if his Everett Ross would return, he confirmed, "As far as I know, I will be [returning]. As far as I know, I will be in another Black Panther. That's my understanding."

More casting news broke in late 2020, a few months after the death of series star Chadwick Boseman, who played T'Challa, the Black Panther. The Hollywood Reporter confirmed that three more original stars were on board: Lupita Nyong'o as Nakia, Winston Duke as M'Baku, and Angela Bassett as Ramonda. The same report also revealed that Tenoch Huerta, best known for Netflix's Narcos: Mexico, was in talks to play a still-unnamed villain. In December 2020, Marvel confirmed that T'Challa would not be recast, and Boseman's death would be handled in a still-undisclosed way.

READ:  The Bachelor’s Creator Just Responded Rumors Greg Is the Next Bachelor After His Split With Katie

All this is interesting news, but still leaves open the question: what about Killmonger? The cast, at least, seems like they'd love for Jordan to make a return. "We all love Michael, we can never get enough Michael B," Gurira joked in her 2019 MTV interview. "I mean, you can never get enough Michael B, we all know this." Jordan himself seems less certain: in a SiriusXM radio interview in April 2021, he was asked to rate the likelihood of his return on a scale from 1 to 10. "I'm gonna have to go with a solid 2," he said. "I didn't want to go zero! Never say never. I can't predict the future."

The end of the first Black Panther certainly seemed to close the door on Killmonger's arc within the Marvel movie universe. After being defeated by a revived T'Challa, Killmonger refused his cousin's offer to save his life and instead requested to be allowed to die watching the Wakandan sunset and to be buried at sea, like his ancestors who chose death over slavery. He's last seen removing the fatal spear from his body and dying peacefully with T'Challa by his side.

Of course, a character's death is no guarantee they'll never reappear again. Given that Black Panther's universe has the Ancestral Plane, where the living can commune with the spirits of the deceased, it would be pretty easy to let Jordan reappear in some capacity. Killmonger does appear and reappear, even apparently being resurrected, in the comics, so anything is possible - we'll have to wait and see what path Marvel decides to take.