We couldn’t tell you anything concrete about American Horror Story’s 10th season – aside from the fact that it’s definitely, probably, filming right now – but w… 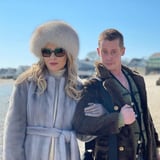 We couldn't tell you anything concrete about American Horror Story's 10th season - aside from the fact that it's definitely, probably, filming right now - but we can give you a proper first look! On March 10, series creator Ryan Murphy posted a photo on Instagram giving fans a peek behind the scenes from the season's set in Provincetown, MA. "Something wicked this way comes," Murphy captioned the shot of series regular Leslie Grossman and AHS newcomer Macaulay Culkin. The two stand with their backs to a beach wearing heavy-looking fur coats, which are definitely not proper beach attire. We can only guess what they're doing at said location wearing those getups, but it's probably a fair assumption that they're up to no good. Although, who isn't during any season of AHS?

While there hasn't been much in the way of clues on the theme for the still-untitled season, the teasers we have been given point to an aquatic adventure being the main focus. Putting the pieces together, as well as the recent photo of Grossman and Culkin by the water, we're getting the feeling that we could be looking at a mashup of The Little Mermaid and The Shape of Water, which both intrigues and terrifies me. At least we'll have a good mix of AHS favorites and new faces to bring the story to life! Along with Grossman and Culkin, the cast includes Sarah Paulson, Adina Porter, Lily Rabe, Angelica Ross, Billie Lourd, Finn Wittrock, and Evan Peters, who previously sat out of AHS: 1984.

We'll have to see how season 10 plays out when it finally comes to FX. Until then, we'll be looking over every inch of that photo to see if we can divine any other clues!