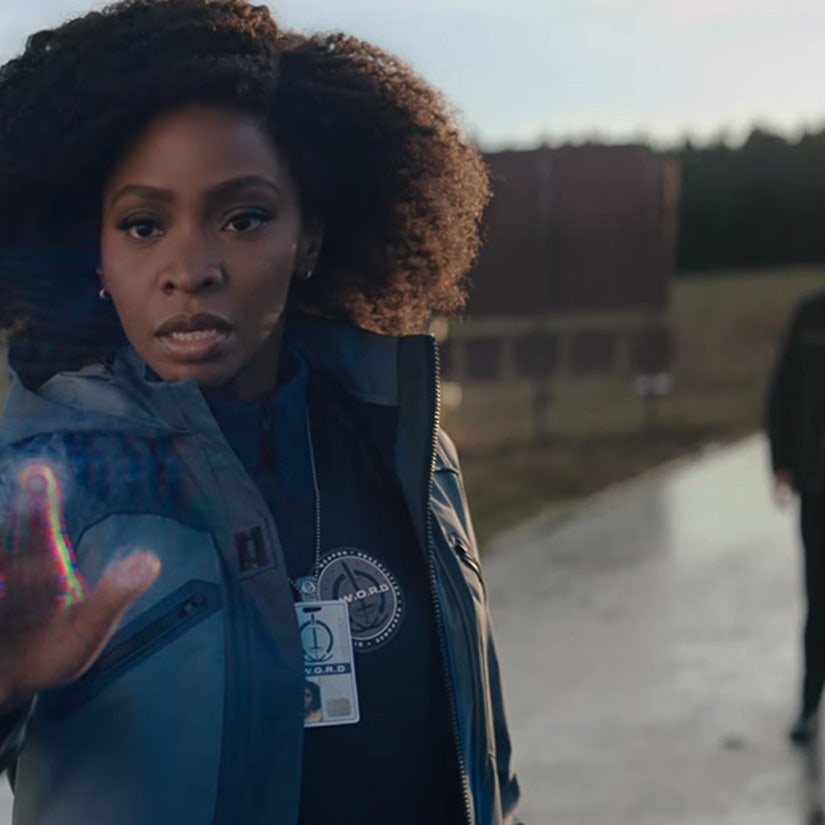 Fully expecting to step into the world of 1980s sitcoms, "WandaVision" had other ideas. As teased in a short trailer presented on Thursday, Friday's new episode took viewers all the way out of Westview and directly in the Marvel Cinematic Universe.

If there was any question as to just how this fit into the MCU, those questions were definitely answered by the end of this episode. Not only do we now know where in the MCU timeline this story fits (we always had an idea), we have a much better understanding of what's going on.

At the same time, we have as many questions as we did before, and we've still no idea how anyone is going to get out of this one ... well, except for Monica Rambeau. Wanda kind of took care of that question last week. Forcefully.

In fact, it was Monica's ejection from the fantasy sitcom world of Westview that ushered in this surprising -- and fantastic -- new perspective on the series. With her firmly on the outside of whatever forcefield is surrounding the town, we took a step out and back ourselves.

We stepped all the way back to the second "blip," five years after the first one that wiped out half of known life in the universe. That's right, Monica's story picks up after the undoing of Thanos' infamous snap. Turns out she was one of the half that didn't make it.

The Case for the MCU on TV

And so, with five years of her life inexplicably missing -- and tragically having missed out on the creation of S.W.O.R.D. by her very own mother, Maria (remember "Captain Marvel"?) as well as the death of said mother -- Monica suddenly found herself in the center of the biggest mystery on television.

Can we take a moment to say that this show right here makes the case for why the MCU deserves to expand to the television format. It's effectively a long-form mystery, and it's definitely benefiting from the weekly pause to allow fans to marinate over all its clues and questions.

Even its structure has been mysterious, with no real certainty at all as to what was going on in those first two episodes. They actually proved a turn-off to more casual fans who lacked the patience to explore a different kind of MCU story, one that wasn't determined to give you a satisfying ending before every credit roll.

Television can tell stories in ways you just can't do on the big screen. "WandaVision" wouldn't be nearly as compelling on the big screen where this entire story would unfold in three hours or less. Spreading out the wonder and tease and uncertainty for two months creates something the MCU hasn't really toyed with on this scale -- tension.

Yes, we had that huge cliffhanger in the penultimate "Avengers" film, but that wasn't going to resolve in a week. Fans just had to live with it as life moved on. With this, they can get invested and involved in the mystery. It's why "Lost" and shows like it can blow up so big on first broadcast. We're being invited to play in a way that just doesn't happen on the big screen.

READ:  The most anticipated movies coming in 2021

Please, don't take this as a diss on "Agents of S.H.I.E.L.D." We know they were here long ago, but that was a more traditional TV show, whereas this one is full-budget MCU broken down into a limited series format. It's something still new.

How Monica Got Into Westview

There were many questions after Monica got booted from whatever this reality is that Wanda and Vision find themselves in, with the answers coming fast and heavy this week. At the same time, there are still more questions.

But we do now know that Monica entered the simulation (we're gonna call it that) accidentally. She arrived on the scene to find that people outside of Westview no longer remember that it ever existed, even as they can be looking at it. And yet, all of our government agents know, so is there a perimeter of forgetfulness around the town?

Meeting up with FBI Agent Woo, Monica got too close, touched the perimeter and got sucked in. Why? We have no idea. But we do know that it was the simulation that changed her garb into period appropriate dress ... which raises the question as to why she was still wearing '70s clothing when she was ejected?

That means it wasn't just an illusion change, but a real change to her clothing, makeup, etc. How much power is behind whatever's going on?

This new perspective also made it pretty clear that her mind was also altered upon entering Westview. We don't know what triggered her to suddenly remember that Ultron had killed Wanda's brother, but that was enough to get her forcefully ejected.

Interestingly, the arrival of Darcy Lewis brought us the team's first glimpse as to what's going on inside of Westview. From her, we quickly learned that there have actually been multiple episodes of each decade of "WandaVision" broadcasting out.

But we also learned something else a little more sinister. While we did get a still-shot of Wanda discovering the drone Agent Woo had sent in (transformed into a toy helicopter but still in color for some reason), other moments were excised from the broadcast.

In particular, we saw definitively that Agent Woo breaking through the radio broadcast to ask Wanda, "Who's doing this to you?" was cut short, as was the red blood that came from Dottie's hand in a black-and-white world.

But the biggest cut came at the moment Monica's Geraldine was forcibly ejected from the simulation. And there was something else cut from not only Darcy's broadcast outside the perimeter, but the broadcast we viewers at home got last week.

On Darcy's old TV, we saw Wanda looming toward Geraldine and questioning who she is before it abruptly cut to the closing credits. But then, in a sinister widescreen scene from inside the simulation, we got to see what they didn't.

Wanda confronted Monica, who tried to say she was just her neighbor. "Then how did you know about Ultron?" she asked, looking every bit the supervillain. Ultimately, she called her a stranger and an outsider before blasting her with magic through the wall, fences and everything until she was right out of the simulation.

Then, as if resetting herself -- it's still not clear if Wanda is just playing along here or if she's fogged her own mind -- she put it all back together before Vision came in and gave us all a horrific momentary vision.

If there was any doubt that Wanda is behind this whole thing as a coping mechanism for the death of Vision, those were seemingly dashed by the grim visage of his head blown apart as we last saw him. On the outside, they'd affirmed they also believed Vision was dead. It looks like he is.

So what is this Vision? How does it have independent thought and autonomy from Wanda, as evidenced by it approaching Agnes and Herb and even starting to question this reality. Did she make him too good, or somehow download his digital consciousness into this world?

Also, is the name WandaVision a play on teleVision in that Wanda is in control of this reality, so it's her vision, as well as her Vision? She controls the horizontal and the vertical? That's pretty cute. Almost too cute!

Who Is the Supporting Cast?

Another question we had was about all of these supporting players in the "WandaVision" sitcom world? This week, as the team began to investigate this whole thing using facial recognition, we started getting alternate names for almost all of them.

Mr. and Mrs. Hart are actually Todd and Sharon Davis. Phil is Harold Copter and Norm is Abhilash Tandon. But all of these people never broke character. What's more interesting is that Herb is actually John Collins, and he actually tried to tell Vision something last week ("We're all--") before Agnes ultimately called him out.

Not identified thus far, though, are the show's most mysterious and sinister characters, Dottie -- she of the red blood -- and Agnes, who has meddled since Day One and certainly appears to know more than she's let on.

While it's not explicitly stated, we think this confirms our theory that Wanda co-opted the real town of Westview, along with its citizens. Those with dual identities are those very citizens, morphed by the simulation into their sitcom roles.

Herb's trimming the brick wall and even the doctor lamenting that they can't escape last week would seem to indicate there is a limit to how much control Wanda has over all of the players in her story, with some at least marginally aware of what's going on.

But what about Dottie, and more importantly, Agnes? Are they also infiltrators from the outside world? If so, what is their agenda? And how much are they victims of the simulation, as Monica was, and how much in control of their own minds are they?

Along those same lines, while we still don't quite know what happened to the beekeeper, we did see that he was a S.W.O.R.D. agent sent in to see what was going on. When he crossed the perimeter (which does extend down into the sewers) his hazmat suit transformed into a beekeeper suit, as his tether turned into a plastic jump rope that retained that form when it was pulled out (like Monica's clothing).

Whatever changes are made in Wanda's world are real changes at the molecular level to pull that off, and that was subconscoius, just the simulation making sure that even intruders blend in seamlessly. And yet, seeing the S.W.O.R.D. symbol, Wanda recognized this as a problem, said, "No," and we reset back. Alas, we didn't get to see that play out from a new perspective as we did so many other moments.

By the end of the episode, Vision tried suggesting they needn't stay there, but Wanda pushed back that they can't leave. "This is our home," emphasizing that she had everything under control.

It seems she's created this fantasy world, on top of a real one, in order to keep Vision alive. So why is it a sitcom world, in particular, rather than just a bygone era? And why is it advancing decade by decade?

Is Wanda trying to find a decade that won't have bigger problems than she can handle (going into the edgier sitcom future seems a bad idea if that's it) or is she not in control of the chronal advances?

That could explain Agnes' presence, always prying and probing but also working to make sure Herb doesn't say the wrong thing and get Vision suspicious. Is it her job to keep the simulation running smoothly, like a living virus protection? Is she even a real person?

Could Agnes be Wanda's witchy mentor from the comic book Marvel Universe, AGatha harkNESs? How deep into magic is the MCU ready to go?

Next week, it looks like we might finally fly headlong into the '80s, but at least we also know what's going on. And now that we've stepped outside the TV, it's hard to imagine the story won't go back and forth from here.