WandaVision is the first of the Disney+ Marvel shows to air, and over the course of its run, it’s turned out to be one of the most satisfying entries, movie or TV show, in the overall Marvel universe. We can talk about the incredible detail of the sit… 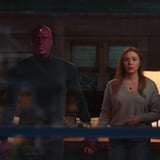 WandaVision is the first of the Disney+ Marvel shows to air, and over the course of its run, it's turned out to be one of the most satisfying entries, movie or TV show, in the overall Marvel universe. We can talk about the incredible detail of the sitcom parodies, we can (and we should!) talk about the ridiculous versatility and talent of Elizabeth Olsen and Paul Bettany, but WandaVision's biggest strength is also what makes it unusual for a Marvel property. Instead of focusing heavily on Easter eggs and hints at what's to come, the show cares most about its small, central cast of characters and developing them in a nuanced way.

At its heart, WandaVision isn't a superhero story in the traditional sense; it's a character drama about the nuances of grief. Its protagonist, Wanda, can't be put into a neat box: she is and isn't a hero; she is and isn't a villain. She never means to hurt anyone, and she saves people, but her grief is so overwhelming and all-consuming that she winds up holding a whole town hostage to her dreams and her nightmares; to them, she is a villain, understandably.

We watch her go through denial, anger, bargaining, all those things that grief tends to bring, and, eventually, acceptance. In a year when so many of us have had to deal with grief (collective, personal, or both), an entire story about the challenges of grieving and of finding ways to cope feels more powerful than ever. It's why one line from the penultimate episode, delivered by Vision in one of Wanda's memories, has become an instant hit: "What is grief, if not love persevering?" That compassionate framing of grief hits home in such an elegantly simple way.

"What is grief, if not love persevering?" - Vision

All this is possible because WandaVision, for the most part, resists the urge to be an Easter egg factory for future Marvel shows. To be fair, we do watch every week wondering if a certain allusion means that some villain is coming or if a casting gag actually is a hint at a future multiverse. Over a decade of watching Marvel movies has trained us to look for these, after all, and the weekly release schedule has only amped up the need to keep the conversations and the theories going.

Ultimately, though, WandaVision politely but firmly brushes off most attempts at confirming theories about Mephisto, Nightmare, the X-Men, the Fantastic Four, and more. It's more interested in being a story about the characters in its title than it is about being a trailer for the next future blockbuster. That's something that, I think, Marvel has lost a little bit over the past several years. Way back in Phase One, although the groundwork was clearly being laid for the Avengers team-up, we still got individual origin stories that created intriguing, three-dimensional characters. We learned about Tony Stark's ego mixed with guilt and trauma, we found out why Steve Rogers devoted himself to fighting, we watched Thor learn humility and selflessness.

In recent years, however, with a couple of exceptions, the focus in Marvel stories always seems to be about what's next, rather than what is. We rarely focus on characters and their relationships because we're always busy chasing down the next magical item or supervillain or focusing on that background billboard to see if it has a clue to a hero that might possibly show up five years down the line. There's no room to breathe when everything hints at something else. That's what makes WandaVision such an achievement: it doesn't exist in a total vacuum (it does, after all, set up at least two future movies and possibly at least one TV show), but that's not the main point.

It doesn't matter that Monica's engineer friend wasn't Reed Richards or that "Pietro" wasn't actually an alternate-universe superhero. What matters is that we got to explore characters and a relationship that the Marvel movies expected us to buy into but never actually gave us enough to really feel connected to. Instead of being told to feel a certain way, those emotions grew organically from the story we watched.

This is disappointing for some viewers, I'm sure. In some ways, it reminds me of the reaction to the Lost finale, divided between those satisfied with the character-driven finale and those angry that they left mysteries unanswered. For me, at least, WandaVision was satisfying and emotionally resonant, thanks to its willingness to simply tell its own story. I can only hope that future Marvel projects will see the richness of their characters and choose a similar path.