Do you have a window cracked? A glass of iced water filled to the brim? A personal fan at your disposal? Because I suggest taking all three precautions before… 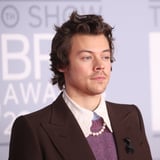 Do you have a window cracked? A glass of iced water filled to the brim? A personal fan at your disposal? Because I suggest taking all three precautions before watching the first teaser for Don't Worry Darling. Director Olivia Wilde finally shared a glimpse at her forthcoming psychological thriller on social media, and though the clip merely lasts 11 seconds, it provided the jolt of energy and excitement I so desperately needed on a Monday afternoon.

The teaser opens with Florence Pugh's Alice ominously gazing into the distance while lounging poolside, and moments later - bam! - the intensity kicks up several notches as we witness Alice and Harry Styles's Jack getting hot and heavy. We may have only gotten a split-second peek at their vigorous makeout session, but I'm already prepared to award it a top 10 spot on our list of the best movie kisses in history. I mean, the groping! The fervor! It's all too much.

Besides showing Styles and Pugh's steamy smooch, the clip also reveals an equally as important detail: the release date. Don't Worry Darling will hit theaters on Sept. 23, 2022, which, yes, unfortunately means we must wait an entire year to see the extended version of that kiss. Set in the 1950s, the film centers on an unhappy housewife living in a "utopian experimental community" with her husband, who's hiding a big secret. The star-studded cast also includes Gemma Chan, Chris Pine, KiKi Layne, Nick Kroll, and Wilde in a supporting role. Here's to hoping Wilde gives us a heads-up before dropping the full trailer, because this lightning-fast teaser alone was enough to entirely derail my productivity for the day.

READ:  Britney’s Dad Is Officially Removed as Her Conservator—Here’s How Much He Made From Her