Bill Clinton wasn’t the only president to get caught up in an affair!
It’s been over two decades since Bill Clinton made headlines for his affair with a White House intern but he was far from the first president to engage in extr… 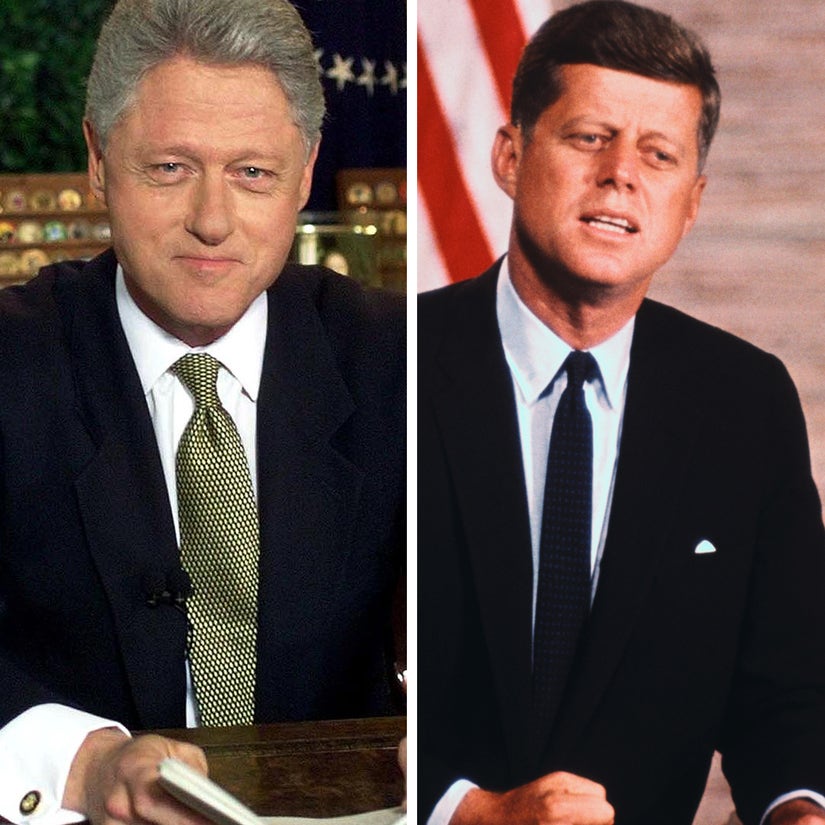 Bill Clinton wasn't the only president to get caught up in an affair!

It's been over two decades since Bill Clinton made headlines for his affair with a White House intern but he was far from the first president to engage in extramarital activity behind the closed doors of the Oval Office. While the recent "Impeachment: American Crime Story" focuses on Bill's digressions, presidents spanning all the way back to Thomas Jefferson often put themselves in some pretty scandalous situations.

Although the infidelity of these former presidents didn't always become breaking news, it certainly still caused turmoil in their private lives that is remembered in the history books.

Here's what was happening in the Oval Office…

Former president Bill Clinton became notorious for his affair with White House intern Monica Lewinsky, who was just 22-years-old at the time. The relationship began in November of 1995 and over the course of the affair, Monica was promoted to a paid position in the White House. By April, Monica was moved to the Pentagon due to concerns that she was spending too much time with the president. She eventually confided in co-worker Linda Tripp about the relationship, who secretly recorded their conversations and shared them with an investigator who was looking into President Clinton's alleged sexual harassment of Arkansas state employee Paula Jones. At the time, Clinton was also being accused of sexual misconduct by several other women.

During prosecution, both Monica and President Clinton denied their affair, which became grounds for charges of perjury against the president. President Clinton was later impeached by the House of Representatives on that charge as well as obstruction of justice. In the ensuing trial, he was acquitted by the Senate and served the remainder of his presidential term.

READ:  The Way They Were: Look Back at Jennifer Lopez and Alex Rodriguez's Romance

According to Stormy, she was paid $130,000 by Donald's lawyer to refrain from going public with the affair right before President Trump was set to take office. The alleged payout raised questions as to whether it violated federal campaign finance laws and led to several lawsuits as well as charges against lawyer Michael Cohen. Meanwhile, President Trump did not face any drastic legal repercussions stemming from the affair -- which he denied -- although he agreed not to enforce an NDA against Stormy and had to reimburse her legal fees.

While John F. Kennedy was in office, it was rumored that he had affairs with multiple women including actresses Angie Dickinson, Marlene Dietrich and his wife Jackie's press secretary Pamela Turnure. Most notably, JFK was reported to have had an affair with Marilyn Monroe, with rumors propelled by Marilyn’s steamy rendition of "Happy Birthday" performed at his 45th birthday party.

While not many details are known about their alleged affair, it's rumored that the duo once spent the night together at Bing Crosby's home in Palm Springs, California. Marilyn and JFK never publicly admitted to their time spent together but many biographers agree that Marilyn confided in close friends about the one-night affair. Less than five months later, Marilyn passed away after an accidental overdose and JFK did not face any public repercussions for the rumored affair.

Following the passing of Thomas Jefferson's wife, he is said to have fathered multiple children with Sally Hemings, a slave on his plantation estate in Virginia. At the time, President Jefferson's relationship with a slave would not have been approved and was not something he admitted to publicly. It wasn't until 1998 that DNA evidence confirmed that Thomas was the father of at least one of Sally's children and most likely all six.

READ:  Miley Cyrus Asks Out A Fan On TikTok!

Franklin D. Roosevelt is said to have had an affair with a woman named Lucy Mercer Rutherfurd, who worked as his wife Eleanor's social secretary. Their affair reportedly began while Eleanor was out of town for the summer with the couple's children and continued as Lucy worked with FDR during WWI.

Soon after, Eleanor discovered the affair when she found a series of love letters between the two in FDR's suitcase. She offered to divorce him but he declined at the advice of his mother and fear of its impact on his political career. FDR vowed to seize communication and Lucy eventually married and moved elsewhere. Despite his agreement, FDR kept in contact with Lucy and after the death of her husband, secretly met up with her until his passing.

President Dwight D. Eisenhower reportedly had a lengthy affair with his chauffeur, Kay Summersby, who chronicled the events in an autobiography six years after Ike's passing. While biographers often dispute the truth to what was written in Kay's book, President Harry Truman reportedly confirmed the pair's affair. It is said that President Truman told author Merle Miller that in 1945, Ike asked permission from General George Marshall to divorce his wife to marry Kay. However, the pair did not marry and Ike remained married to his wife Mamie until his death.

Warren G. Harding, who was president from 1921 until his death in 1923, reportedly had multiple affairs while he was married to his wife Florence. Before taking office, he is said to have had a romantic relationship with Carrie Fulton Phillips, which was confirmed by love letters acquired by the Library of Congress.

President Harding later connected with Nan Britton, a woman over 30 years his junior who eventually gave birth to President Harding's illegitimate daughter, Elizabeth Ann. While Nan went on to publish a book about her relationship with the president, it wasn't until recently that the affair was able to be confirmed through DNA testing.

Before Grover Cleveland was president, he had a romance with a woman named Maria Crofts Halpin. She later claimed Grover was the father of her son but details of exactly what happened after his birth greatly differ. While Grover claimed to have helped place the child with an adoptive family, Maria accused Grover of forcibly taking the child away and then temporarily placing her in an insane asylum. She never regained custody of the child.

When Grover then ran for president in 1884, his opponents used his illegitimate child against him with the slogan, "Ma, ma, where's my Pa? Gone to the White House, ha ha ha!" Despite this, he won the presidency and went on to marry the 21-year-old daughter of his best friend, who was 27 years his junior.

While James Garfield was serving as a Civil War general, he reportedly had an extramarital affair with a woman named Lucia Calhoun. Although he is said to have later destroyed the many letters he had written to Lucia, they are referenced in his diary. He confessed about the affair to his wife Lucretia who eventually forgave him for the indiscretion.