Sometimes things have to get worse before they get better. In the case of “The Wilds,” things get way worse, like comically bad. The second season of the teen survivalist story, which hit Prime Video on May 6, shows the group fighting extreme physical… 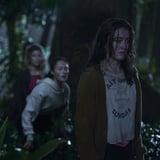 Sometimes things have to get worse before they get better. In the case of "The Wilds," things get way worse, like comically bad. The second season of the teen survivalist story, which hit Prime Video on May 6, shows the group fighting extreme physical and mental exhaustion while gradually uncovering the Dawn of Eve experiment that's the cause of their suffering. There's also the introduction of male castaways, unknowing participants of the Twilight of Adam program. Though both groups collectively rebel by the end, escape is not yet earned.

The cast similarly experienced successes and obstacles while filming the challenging season. Sarah Pidgeon, who plays Leah Rilke, and Reign Edwards, who plays Rachel Reid, spoke to POPSUGAR about bonding with their costars, shaping their characters, and shooting their most difficult scenes.

Pidgeon continues to portray the group's relentless whistleblower, but in season two, Leah questions her judgment as she experiences vivid hallucinations. By the end of the season, Leah's having imaginary conversations with her celebrity crush, Ben Folds. (Yes, played by the real-life singer.) Those scenes, which also take place in the water, were the hardest for Pidgeon. "It was just a challenge to have the physical challenge of being in water and also the mental space that Leah was in," she says. "It was slightly unfamiliar and more heightened, so that just presented something new to figure out how to wrap my hands around."

"That stubbornness turns into ferocity to get justice."

Despite her anguish, Leah maintains her fighting spirit. "There are so many times throughout these two seasons where she's gotten seriously knocked down," Pidgeon says, "and yet despite that, she still challenges herself to figure out the truth." Pidgeon says she most admires Leah's "strength to keep persevering." She adds, "I think she's incredibly stubborn, but she's very smart, and that stubbornness turns into ferocity to get justice for not only herself but the entire group."

READ:  The Appeal Of Johnny Depp! Why Women Still Support Him! | Perez Hilton

Rachel also faces insurmountable obstacles. The first season revealed she lost her hand in an accident at some point during her time on the island; the new season begins by showing how that happened, during a shark attack that seemingly killed Rachel's sister Nora. (It's worth noting Nora was also revealed in season one to be an informant for experiment mastermind Gretchen Klein.)

The first episode, filmed over the course of three days in New Zealand, was "definitely the most challenging and intense" for Edwards. Following her initial state of shock, subsequent episodes show Rachel vacillating between various grief stages, before she ultimately makes peace with her sister's absence while in awe of bioluminescent waves crashing. The camera abruptly cuts, however, to Dawn of Eve headquarters, where an unscathed Nora watches the surveillance footage.

Nora's fate is a major question that looms over the entire series; as it turns out, Edwards knew about as much as the audience during filming. "They were keeping it under wraps as to what was going to happen with Nora, because it was such a big shock what happened at the end of the first season, so I didn't really know," Edwards says. "I don't think I knew until we got that episode, actually. They kept it under wraps from us for a good minute."

While certain spoilers are kept secret, Pidgeon describes having a "collaborative" working relationship with showrunners, namely "The Wilds" Creator Sarah Streicher and Executive Producer Amy B. Harris. "There was always room for conversation," she says. "They understand these characters, at times, better than I do. They're just such valuable resources who were always ready to lend an ear and advise."

Edwards chimes in with an anecdote: after filming the pilot, Edwards watched diving competition videos as part of her research for the role, and she was curious about how common it is for divers to hit their head on the board. She mentioned it to Streicher, and it later became a part of Rachel's story. "It is really fantastic to see them be willing to hear us out and find different things that we find intriguing about our characters, and they do incorporate it sometimes," she says. "It's a really rewarding experience to be able to have that with the creators of the show."

For all its strife and sunburns, "The Wilds" does have moments of levity. For starters, there's Shelby and Toni's love story, which has since sparked a dedicated Shoni fandom, and other snippets of joy, like the campfire sing-along set to "Home" by Edward Sharpe and the Magnetic Zeros. Pidgeon says that was her favorite scene to film, while Edwards cites the bioluminescence scene. And though there wasn't much onscreen overlap, the Dawn of Eve and Twilight of Adam cast members spent a lot of time together during filming. "We all lived in the same hotel, so we would have barbecues, we'd get on the bikes, go to brunch down the beach," Pidgeon says. "It was like one big slumber party, really." Edwards notes the group's big game night, and Pidgeon adds, "It got competitive."

Though they hold their own when it comes to board games, Edwards and Pidgeon had one pick for which of their costars would be the best survivalist in real life. "You know who comes to mind? Erana. I feel like she just is one that'll surprise you," Edwards says. ""She has this calm out there. She has this really groundedness to when we're out working on location, which I think is really cool."

READ:  Khloe Kardashian Lashes Out At Media For Blaming Her For Tristan's Cheating

All eight episodes of "The Wilds" season two are currently streaming on Prime Video.

Related:
Can't Get Over The Wilds? Here Are 11 Engaging Shows to Watch Next