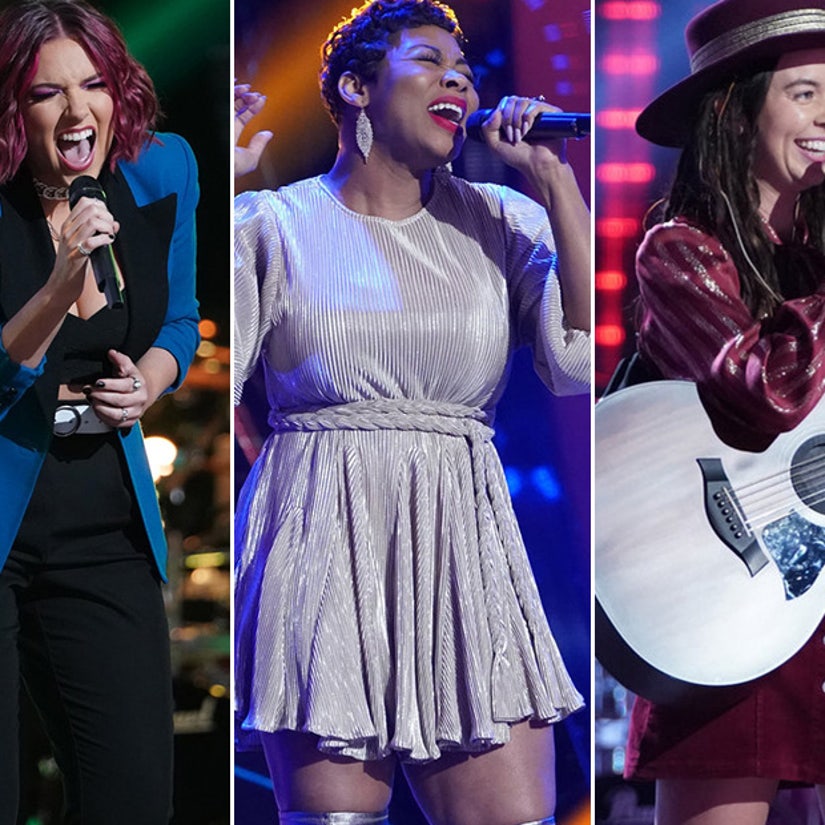 Kelly Clarkson pulls out all the stops to beat Blake Shelton, even showing doctored footage of Gwen Stefani trashing her fiancé -- plus, Nick fights dirty with brutal memes (did you know Blake hates puppies?)

With the Blind Auditions winding down on “The Voice,” the Coaches were resorting to some of their dirtiest tricks yet. Nick brought out fake memes to denigrate his fellow coaches, but Kelly definitely took home top marks for trolling.

For her battle against Blake with a country artist, she pulled out a spliced video of Gwen Stefani just trashing Blake and saying how much better of a choice Kelly would be. It was so terrible, it was an absolute joy to watch over and over again. And we kind of want Kelly to be our Coach now.

Bachelor Finale Blowup: Did Michelle or Rachael Win? Are They Still Together? -- Plus, Huge Bachelorette Twist

Getting pickier in the late rounds, the Coaches absolutely screwed up letting one artist go, which you’ll see reflected in our rankings below. She’s not the most polished and professional singer on the show, but she’s definitely got more tools in her arsenal than a lot of them.

The night saw teens coming on strong (even tackling Adele), but also a very cool indie rocker chick, a singer who twisted a Thompson Twins classic into a country ballad you have to hear to believe and an incredible four-chair turn on a very challenging Billie Eilish track.

And of course, we have some of the best of the worst of the Coaches’ banter at the bottom. But first--!

And just for fun, I'm going to rank the performances from worst to first to see who my favorites are, and then see how well they do as the season progresses.

(“Wildflowers,” Tom Petty - Chicago, IL) We were not completely sold on these harmonies. They weren’t just as tight as we expected, with Almond not quite rising to Olive’s in the lower parts, and then rising higher. This is fine if it’s calculated, but they didn’t always seem to be on the same page when it came to lead versus harmony and vice-versa. The biggest problem, though, is that we weren’t feeling their gentle vibe authentically, and then that’s the only gear they gave us.

(“More Hearts Than Mine,” Ingrid Andress - 27, Nashville, TN) Tyler has a sweetness to his voice, but he did absolutely nothing to make us believe that he believed anything he was singing. There was absolutely no emotional connection, he was just belting it out there. Even when he brought it down, it was just because the song was winding down. He needs to work on putting his heart and soul into his performances to reach that next level, because he does have a lovely tone with lots of grace and power that’s interesting for country music.

READ:  The Voice Crowns a Winner

(“Let Him Fly,” Patty Griffin - 15, Romeo, MI) Rachel was a little warbly with her pitch throughout this piece, but she does have a solid foundation vocally to work with. Perhaps nerves, perhaps excitement after Nick turned, but she never fully took control of this song. Her rhythm and timing was off at times, too, and she was definitely trying too hard with belting and that vibrato. These are things that can be worked on and she’s got a great lower register, but we’d be lying if we didn’t say Rachel faces an uphill battle this season for sure.

'Khloé Is That You?': Maren Morris' Grammy Look Had Fans Doing a Double Take

(“When We Were Young,” Adele - 16, Adrian, MI) At 16 years old, Rio has so many tools in her arsenal, and a lovely middle range in her voice. But when needed, she could reach for power and a higher register she also has pretty solid mastery of. She had a bit of a rapid vibrato at times and struggled to enunciate clearly at times. She didn’t fully have a grasp on her own instrument yet, which is probably why more chairs didn’t turn, but she already has the ability to emote the story of such a mature message, and that speaks volumes over little things that can be Coached.

(“I Wanna Be Down,” Brandy - 20, Fort Lauderale, FL) Was there something wrong with her mic, or did Nadianicole really deliver so much of that song so softly? When she soared, she really did have a lot of polish on her voice, with mostly consistent control of her range. Where we struggled was in feeling that she believed what she was singing, but we absolutely were in love with her voice. With songs she feels a kinship to, she could really blossom into someone special. She’s better than a no-chair turn.

(“I’m No Stranger to the Rain,” Keith Whitley - 34, Austin, TX) With a slight nasally delivery that is pure country, Jordan has the kind of richness to his tone that you could hear on a vinyl record right now. He absolutely knows how to use it to wring every bit of meaning from the lyrics. It wasn’t an incredibly exciting performance, but it was so confident and so consistently in the pocket of what he was trying to do the whole time that we couldn’t help but love him. We can’t believe Kelly’s fake Gwen audio didn’t work on him -- actually, we think that she chose schtick over authentically pitching to him is why she was out of consideration almost immediately.

(“Hold Me Now,” Thompson Twins - 25, Americus, KS) What a beautiful ache Savanna injected into this ‘80s pop synth classic, transforming it into a beautiful -- but wholly recognizable -- country ballad. It’s a testament to her artistry even beyond her rock solid vocals, and the heart with which she sings. She clearly has artistic vision, to see what she pulled out of a song from such a different world. Plus, she has an authenticity to her tone.

(“Nightmare,” Halsey - 22, San Diego, CA) Lindsay definitely put her own stamp on this Halsey track, injecting it with a lot more power, and strategically playing with the melody and even the timing, but in a way that felt calculated. All of her decisions were compelling and selected to emphasize the narrative of the lyrics, which was also very smart. She showcased power, strength and a lovely gentleness (at times) that could make her a very interesting artist moving forward.

(“my future,” Billie Eilish - 20, Milwaukee, WI) Without sound like she was doing a Billie Eilish impression, Anna still managed to have all those same haunting, beautiful, ethereal qualities that make Billie’s music so remarkable and engaging. Anna made incredible choices for how to use her voice, how to orchestrate a run perfectly and how to almost whisper the message at times. It’s hard to say what kind of diversity she has as an artist from that, but it was such a compelling start for her first performance outside of church, it’s exciting to imagine the possibilities. Nick went all out here, sharing fake memes to try and trash his fellow Coaches, but it didn't work any better than Kelly's doctored video.

(“Zombie,” The Cranberries - 26, Stanwood, WA) We honestly expected more chairs to turn, but at least it wasn’t just Nick. That kind of authentic female rocker vibe is all too rare in this industry and Savanna has the grit, the power, the range and all the tools necessary to make it believable. The Cranberries is hard to sing and do justice, but Savanna found ways to make it her own. She has a beautiful haunt to her tone, with all the different facets to make this type of music really come alive.

(“Sweet Love,” Anita Baker - 34, Detroit, MI) Zania just hit the stage with all the confidence of the real Anita Baker. It was a bit of a copycat performance, but when you’re copying such an incredible vocalist, this isn’t necessarily a terrible thing. It proves that Zania is the real deal. Hearing she also does funk and pop gets us excited about what else she has to offer beyond what we’ve seen here. She’s got the power, the control and the tone to own this R&B staple, and she commanded it fully in every moment.

“The Voice” continues Mondays at 8 p.m. ET on NBC.