NBC’s tradition of live musicals at the holidays continues with this year’s Dr. Seuss’ The Grinch Musical, and yes, you definitely recognize the man behind the green. That’s Matthew Morrison, best known as high-school teacher Will Schuester from Glee…. 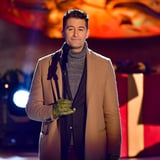 NBC's tradition of live musicals at the holidays continues with this year's Dr. Seuss' The Grinch Musical, and yes, you definitely recognize the man behind the green. That's Matthew Morrison, best known as high-school teacher Will Schuester from Glee. But as musical-theater fans already know, Glee is far from Morrison's only musical credit.

Years before he broke into the big time with Glee, Morrison had a steady career as a rising star on Broadway. He was in the original cast of Hairspray, originating the role of teen heartthrob Link Larkin in the Tony-winning hit musical back in 2002. A few years later, he earned his own first Tony nomination with The Light in the Piazza, playing Fabrizio Naccarelli, a determined and romantic young Italian who woos the show's heroine, Clara. His last role on Broadway pre-Glee was in the revival of the Rodgers and Hammerstein classic South Pacific, playing WWII-era Marine Lt. Joseph Cable and singing the show's most famously controversial song, "You've Got to Be Carefully Taught."

Morrison earned two Golden Globe nominations and one Emmy nod during his time on Glee, which kept him busy from 2009 to 2015 and let him put his own spin on everything from hip-hop to classic Broadway to Top 40 pop hits. He jumped immediately from the end of Glee into another Broadway musical, Finding Neverland, loosely based on the life of Peter Pan author J.M. Barrie. In more recent years, his onscreen roles have taken a darker turn, with a memorable role as Jo's abusive ex on Grey's Anatomy and as a haunted camp staffer in American Horror Story: 1984, among others.

READ:  Simone Biles Leaves Nike For New Partnership With Athleta For Her Own Activewear Line

In a handful of preshow interviews, Morrison has revealed just how in depth he's been going with his Grinch training. "I took a lot from Joaquin Phoenix's performance in Joker, just going down those steps, like loose and [reveling in] abandon and just carefree and raw. I really felt like that was how the Grinch would dance. At first, I was like 'I don't think the Grinch dances'; it didn't feel very Grinch-y, but then I came up with that and it felt right," he told Entertainment Weekly. "I love playing dirty and dastardly. That's so much fun for me. Most people know me from Glee, and so this is a joy for me to do."

For a guy who's made a career out of playing leading men with the best intentions, he definitely sounds excited to be playing a grump for once! We'll get to see the results of all this work when NBC airs Dr. Seuss' The Grinch Musical live on Dec. 9.