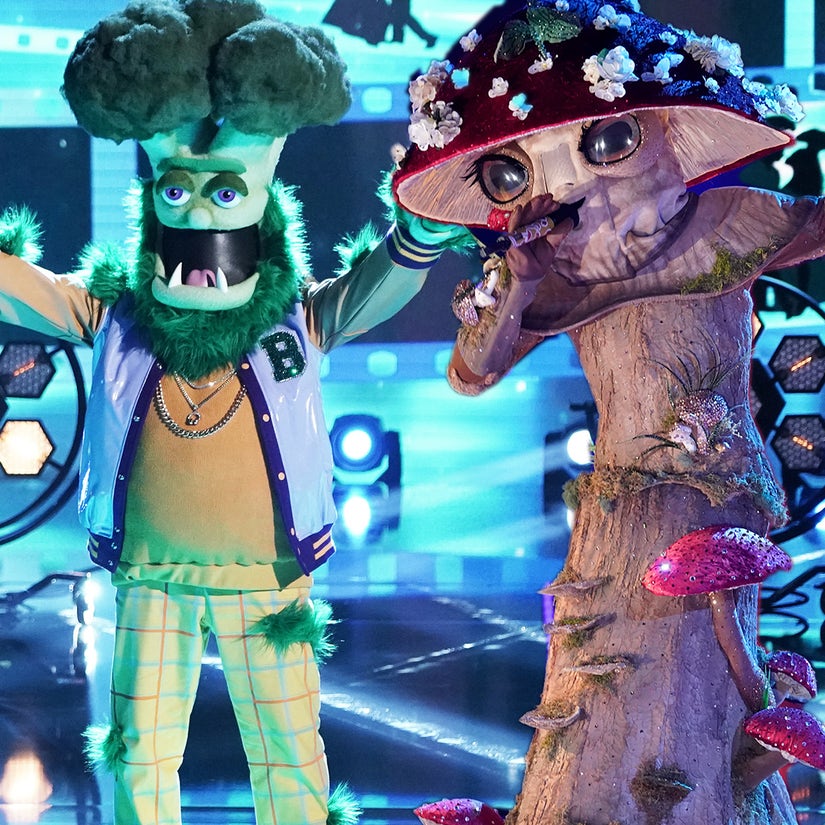 Group C's Broccoli, Jellyfish, Mushroom and Squiggly Monster all upped their games with solid performances, but it wasn't enough to save this sitcom legend!

Thank goodness Group C really stepped it up this week on “The Masked Singer,” with more than just one of them showing up with some actual vocal ability. We might got a competition again!

In fact, Jellyfish made a huge play for battling with Mushroom as the group’s front-runner, while Broccoli brought a very charming vibe to his performance. Squiggly Monster is still pulling up the rear vocally (for us), but that doesn’t always matter in this competition if people love his personality -- and that costume is incredible!

Speaking of incredible costumes, the Fox sashayed back onto the stage, this time as “Mr. TV,” and once again the panel had absolutely no idea who it was. Okay, admittedly, we weren’t totally sure at first, either, though we did quickly narrow it down to former winner Wayne Brady, who really can just sing anything.

But as good as he proved himself vocally, he absolutely stunned Nick Cannon and the panel by agreeing with Ken Jeong’s guesses not once, but twice on the night. That’s fully 50 percent of the night’s guesses where he was all, you know who’s pretty good at this game? Dr. Ken!

Next week, we slide back over to Group A to check out the Finals, featuring Popcorn, Snow Owls and Sun. With such a packed lineup and nowhere to hide, it’s anyone’s week!

Now, let’s jump into this week’s batch of contestants, complete with clue packages and performances. And don’t worry, before we get to the shocking unmasking, we're going to make you power through the terrible (and occasionally good) guesses made by our illustrious panel of Robin Thicke, Jenny McCarthy, Ken Jeong and Nicole Scherzinger first. We do this because we love ... to torture you.

Mushroom sang with full throat after last week’s falsetto performance, and while he proved he’s got pipes for days (holding that note forever!), it also came with a far more limited range than we expected. Intentional misdirection? He definitely knows how to connect and we agree he’s emerging as the Group C front-runner.

Guesses: After lots of ‘Hamilton’ references last week, this week piled on some ‘Mean Girls’ ones, making this feel even more like a Broadway star. We also got a lunch of two black beetles, sunglasses and a tiara as he said he learned to embrace being a nerd.

His magic lamp reveal was … a plate of Jell-O brains? “A mind is a terrible thing to waste, but it makes for a pretty sweet food,” he said. Ken still thinks this might be Donald Glover, twisting OJ in the package to Tang because Childish Gambino came from a Wu-Tang name generator. But that’s not a “red bone,” man!

Nicole Scherzinger thinks maybe it was Adam Lambert with LGBTQ hints and that note sustaining, but Wayne says that’s not Adam’s distinctive tone. Wayne was thinking Willow Smith with the clues, but then the voice pushed him to perhaps Jaden Smith, with the red brain representing “Red Table Talk.”

READ:  Everyone Is Obsessing Over This $35 Quilted Coat From Target

Robin jumped on board with that guess before Nick seemingly revealed that he’s figured it out. When Nicole asked if he knew, he replied, “I’m surprised that you don’t.”

The internet isn’t ready to call it yet, either, with multiple guesses flying including Jonathan Bennett, famous for the “Mean Girls” film, and more love for Broadway (and “Snowpiercer”) star Daveed Diggs and Jordan Fisher.

Mushroom is Jonathan Bennett. Mean girls, hosts Halloween wars, my Bf is all over it 👍🏽👍🏽 #TheMaskedSinger

Really have a STRONG feeling that Jordan Fisher is the Mushroom #TheMaskedSinger pic.twitter.com/kIx1TBKg19

Broccoli was still doing more of a spoken-word delivery (think William Shatner sings the classics), but he was singing in pitch throughout with a sweet intensity that was a marked improvement over his performance last week. This was a pretty rock solid vocal, showing real control and intention.

Guesses: While still carrying himself like a big-deal movie star (though perhaps past his professional prime), Broccoli dropped a ton of “Goodfella” and mobster clues this time around, talking about a meeting with the “big cheese” where he came through with a … pineapple and ham pizza?

Nicole was thinking that maybe it was Wayne Newton, based pretty much on that last clue, while Ken jumped on board an internet guess from last week. “Captain Ron” anchor, Canadian bacon and a lot of wishing that maybe it’s Martin Short.

In the most amazing development of all time, Wayne actually agreed with Ken. Jenny, meanwhile, was doing homework and tried dialing those numbers above on a phone and came up with the name “F-R-A-N-K.” That took her to “The Producers” and maybe Jason Alexander (his father, Frank Costanza).

Twitter is feeling that comedian vibe, but they were throwing out names like Howie Mandel, and Dana Carvey (writer and performer of the most famous broccoli-based song of all time. We also saw several people who took that Vegas feel to a Paul Anka guess.

Of course from the very first note, you had me at hello... Paul Anka is Broccoli #TheMaskedSinger pic.twitter.com/snXacBmqeb

Squiggly Monster certainly seemed to be having fun on this Rolling Stones classic, but we’d hardly say he was slaying it vocally. It’s not a vocally challenging song and he managed it well enough, but in a very casual way like he was holding a beer in one hand and a karaoke mic in the other. Even his stage presence was at about that level, despite the fun energy of the costume.

Guesses: This week, we learned about a litany of tragedies in his life and the fact he was bullied for being different until he learned laughter was his best weapon and medicine. There was imagery of a penguin, football, pineapple and burritos with a side of strawberries.

As for his magic lamp, his clue was a giant teddy bear, because he’s here to “bear” it all. “Yes, I said that.” Jenny was already feeling her guess with “three men and a baby” and doctor references (“Becker”) and the teddy bear taking her to Ted Danson. Even Squiggly was nodding to that.

Robin, however, thought of the movie “Ted 2,” and the pineapple referring to Spongebob Squarepants to land on David Hasselhoff. Ken, as expected, was in his own headspace and that was politics. “Inconvenient Truth”? Al Gore?

He strung together a lot of clues, and somehow roped Wayne again into agreeing with him thanks to the overwhelming number of political clues. Is this former Vice President Al Gore? He is married, which keeps it in line with that viewer question’s answer.

Well, Twitter liked the idea of S.M. being a tall comedian type, but they were thinking more “Full House” than “Good Place.” Bob Saget emerged a clear front-runner online, though a lot of people were also thinking this sounds like former President Barack Obama. Really, guys?

the squiggly monster on #TheMaskedSinger pic.twitter.com/DYkMZSY4AS

WHY DOES THE SQUIGGLY MONSTER SOUND LIKE OBAMA ??? Plus the presidential office thing
#TheMaskedSinger

Okay last guesses... and these are WAY OPPOSITE... Squiggly monster is either The Rock or Bob Saget #TheMaskedSinger

Ava DuVernay Delivers Passionate Speech At BLM Election Event: 'We Are in a War'

Jellyfish gave a much more confident performance, with a beautiful subtlety in her voice that belied it’s bigger potential. Her control was just perfect, even as she kept her range very small throughout. But this piece is more about emotional connection, and she definitely managed that.

Guesses: Already feeling very youthful, Jellyfish referenced her “Papa J,” her “Papa Joey” multiple times as a huge influence, suggesting even that he drove her to gigs, so she must have started performing pretty young.

Her clue package showed a ship dubbed the USS Big Bird, and showed her and her dad doing yoga and him waking her up at 7:20. We’re not sure why she attacked a bowl of cereal, though .. is she a cereal killer?

She acknowledged her nerves last week, saying she’s usually one of the best at what she does so the criticism was hard to hear. Her magic lamp clue was a stuffed tiger as she purred an “R.”

Robin took Ken’s dumb-dumb hat for the round, asking if the tiger was a lion. “Is that a lion?” Uh, it’s not. Nevertheless, he decided it was Lion-el Richie’s daughter, Sofia because they were his gigs, not hers. But seriously, Robin, you don’t know the difference between lions and tigers? We can’t bear it, oh my!

Ken thinks that it’s Lana Condor, though the only clue he was able to connect from the package was “Big Bird” because condors are big birds. And yet, Wayne again thinks he’s making sense, so he might be right. He needs to be examined.

Wayne, instead, was thinking maybe it’s a showbiz family. Jamie Lnnn Spears? Halle Bailey (from Chloe x Halle) and the upcoming Little Mermaid. Their guesses are all over the place, and Twitter is just as lost.

We saw guesses for Paris Jackson, Noah Cyrus, Vanessa Hudgens, Leighton Meester, Janet Jackson, Auli’i Cravalho, Billie Lourd and some more support for Sofia Richie -- though maybe not because they think a tiger is a lion, Robin!

Oh maybe the Jellyfish is Noah Cyrus? I could kind of hear it! #TheMaskedSinger pic.twitter.com/Fz9yHc7C9d

This group stepped up in a big way this week, with Jellyfish rising to her potential while Mushroom maintained his lead at the front of this pack, though barely, we’d now argue. That leaves Broccoli and Squiggly Monster in jeopardy for us.

Honestly, they both did their thing as best they could, but we’d probably give the vocal edge to Broccoli. He just had a little more polish on his voice and felt like he was giving us a unique vocal experience, while Squiggly is just out there having a good time.

But did the voting audience agree? Of course they did, because Squiggly Monster is the weakest link. But who is it? Ted Danson? Al Gore? Someone heretofore unguessed?

The panel falling in line with online thinking (which they obviously can’t see) makes us wonder if their terrible guesses are intentional misdirection. After all, in the end, they all seem to agree that this is Saget, and yet his name has never come up before now.

As they all broke down their Bob Saget reasons including “Full House” and “America’s Funniest Home Videos” references, alongside the internet push, we were fully on board.

Honestly, we’re a little surprised that Bob Saget didn’t get a little more dynamic and physical with his performances. We know that’s not really his style, but as a comedian he definitely could have brought it more as a performer.

That said, the man is an absolute comedy legend and a great get for this show. He knows how to have fun and it was clear he was enjoying his time on the show. And him going early is right, too, because he just can’t keep up vocally.

“The Masked Singer” continues Wednesdays at 8 p.m. ET on Fox.