The season one finale of The Mandalorian introduces a terrifying new weapon: the Darksaber. In the episode’s final moments, it’s revealed in the possession of the villainous Moff Gideon, an Imperial officer who has personally hunted down and murdered … 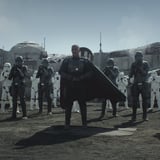 The season one finale of The Mandalorian introduces a terrifying new weapon: the Darksaber. In the episode's final moments, it's revealed in the possession of the villainous Moff Gideon, an Imperial officer who has personally hunted down and murdered untold numbers of Mandalorians. While it's a new weapon in the live-action universe, viewers of the Star Wars animated shows will definitely recognize it. With Bo-Katan Kryze vowing to take back Mandalore and her old weapon on the latest episode of The Mandalorian, it seems that the Darksaber is going to play a big role in season two, here's everything you need to know about the creepy-cool weapon.

Although it's currently being wielded by an Imperial moff, the Darksaber is a weapon that has deep historic ties to Mandalore and its people. According to the lore of the extended Star Wars universe, the weapon was first wielded by Tarre Vizsla, the first Mandalorian Jedi. As The Mandalorian reminds us, the Jedi and the Mandalorians have historically been enemies, but with Tarre Vizsla's position as both Mandalorian leader and Jedi, there was a brief period of peace between the factions. After his death, his saber was returned to the Jedi Temple, but it was stolen by members of his clan during the fall of the Republic and the rise of the Empire, which coincided with the fall of the Jedi Order. The saber became the symbol of the Mandalorian leader, who traditionally had to win it from its previous owner.

The civil war that is mentioned in The Mandalorian stems from this rule of succession. Darth Maul, a Sith lord during the Clone Wars era, won the saber in a duel with Pre Vizsla, and the Mandalorians who refused the rule of someone not from Mandalore formed a splinter group under the leadership of Bo-Katan. During the Imperial era, a Mandalorian named Sabine Wren came into possession of the weapon and, after using it herself, handed it off to Bo-Katan, who then became the Mandalorian leader. That's the last we hear of the Darksaber until it reappears with Moff Gideon. Given that Moff Gideon is infamous for leading the Great Purge of Rebel-sympathizing Mandalorians, the most obvious answer to the question of how he got it would've been that he (either personally or indirectly) killed Bo-Katan and took the saber. However, episode three of season two reveals that Bo-Katan is alive and on his trail, ready to reclaim what she believes is hers. Hopefully this season we'll learn how he came to possess it, but until then, it's definitely a frightening thought that this powerful and historic weapon is in the hands of an enemy of the Mandalorians.