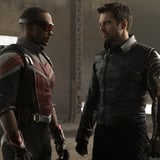 Ever since Avengers: Endgame, the MCU timeline has kind of been all over the place. Even though Spider-Man: Far From Home was released a few months after the aforementioned film, Disney+'s recent Marvel shows have been shuffling up the chronological timeline. While Spider-Man: Far From Home seemingly takes place eight months after the events of Avengers: Endgame, WandaVision takes place about a month or so after people started returning from the Blip. Now, we know where The Falcon and the Winter Soldier will fit in.

Ahead of the show's release on March 19, director Kari Skogland revealed that Falcon and the Winter Soldier will take place about six months after everyone returns from the Blip. As the world deals with half of the population coming back five years later, the show's stars Sam Wilson and Bucky Barnes will deal with their own struggles. While Sam is dealing with the loss of Steve Rogers - who may or may not be dead - Bucky is dealing with the repercussions of his past as the Winter Soldier.

"Everything narratively was informed by that event for us," Skogland told Collider. "It meant that we're just past the shock of it. We're just past the joy of it - because we're imagining that there would be a lot of joy, in people returning. Now we're into the reality of it, which is complicated. With half the population Blipped away, you've got different economic circumstances, different border circumstances. Different countries were cooperative, that weren't before. Neighbors are cooperating, who weren't necessarily getting along before. People moved into houses that they didn't own before. Everything changed. Now we're into that moment. We're past the surprise of it and now we're into the realities of it. I think that makes for a very different place in the story, because we can get not only grounded about it, but we can drill into how people respond to that. Some of it's good and some of it's not so good."