Azaylia was diagnosed with leukemia at only eight weeks old.
“The Challenge” star Ashley Cain’s daughter Azaylia Diamond has tragically passed away after battling leukemia.
On Sunday, the reality star sadly announced that… 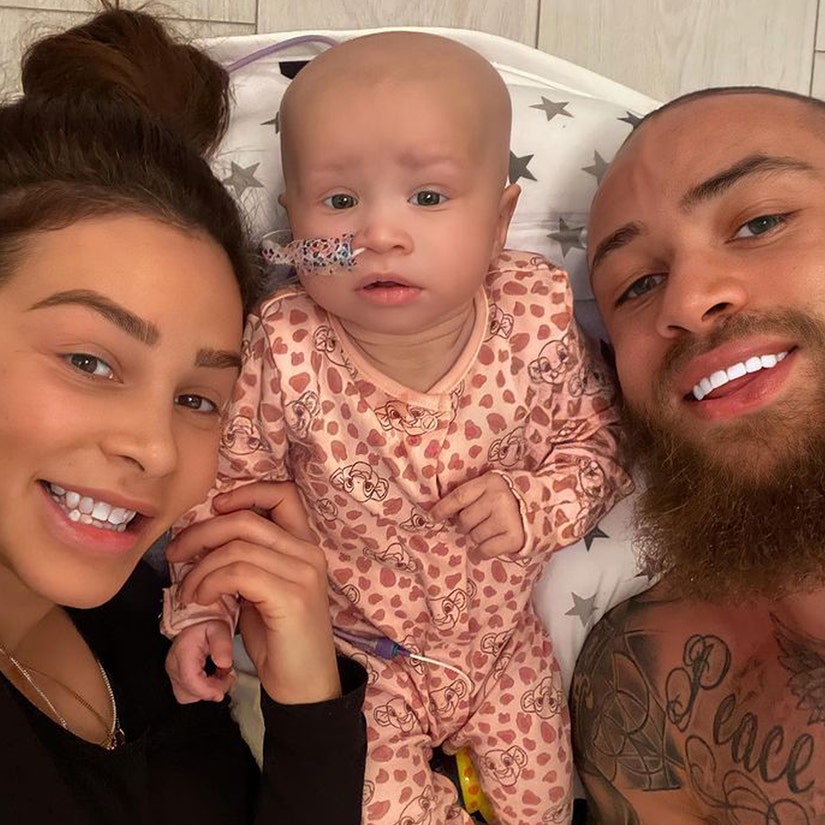 Azaylia was diagnosed with leukemia at only eight weeks old.

On Sunday, the reality star sadly announced that his baby girl, who turned eight months old on April 10, has died. Azaylia -- whom Ashley shares with girlfriend Safiyya Vorajee -- was diagnosed with leukemia at only eight weeks old.

"Rest In Paradise Princess 👼🏼🌈 I will always hold you in my heart until I can hold you again in heaven ❤️😢 #AzayliaDiamondCain," Ashley wrote on Instagram Sunday morning, alongside a picture of him holding his daughter.

In a post on her own page, Safiyya wrote, "👼🌈You are my Angel my heartbeat my soul, RIP my precious baby, you will always be with me like a handprint on my heart 🧡 🤚 🙏🏼👼 🌈."

This came just a little over two weeks after the former British soccer player shared an emotional video in which he gave a heartbreaking update on his Azaylia's condition, revealing he was told that Azaylia only had "one, two days to live."

Shortly after that post, Azaylia was able to come home, where she spent the remainder of her short life in the loving arms of her parents who chronicled their final days with their daughter, treasuring every moment together.

In the 10-minute video posted to Instagram before Azaylia got to go home, Ashley said his daughter had developed cancerous tumors throughout her brain, kidneys, liver, lungs and spleen. He added that the plan to take her to Singapore for a CAR T-cell therapy is no longer viable and that the chemotherapy isn't working.

"Her disease is that aggressive that nothing they are doing is working," Ashley said. "She's one in a trillion, but unfortunately so is her disease."

The discovery of the tumors came in early April during several tests for the T-cell therapy. At the time, according to Ashley, "consultants said that they think she's only got one, two days to live."

"And it could even be like that night," he added. "So we took Azaylia home with the palliative care team and stuff."

Azaylia continued to fight over the next few days as the family returned to the hospital once more, but the doctors were all out of options.

"She's had a tough, tough life," he added. "From eight weeks old she'd been in hospital having chemotherapy, operations, transplants. And I feel like for the last part of her life, I just want to take her home, see her like a baby and give her the best rest of her life that we can give her."

One day later, the "Ex on the Beach" star shared a series of photos of Azaylia taking her "last bath" in the hospital.

"9 days ago consultants told us my daughter had 1-2 days to live, but thought she may pass that evening," he captioned the post. "Even with a barbaric disease consuming her blood, tumours in her brain and organs and amounts of pain I cannot imagine... She is still battling through 9 days later, with parts of the day with nothing but smiles despite her discomfort. 💔"

READ:  Do ‘Bachelor’ Contestants Get Paid? What We Know About How Much Matt’s Suitors Made

"This is a testament of this little girls strength and the fight she has possessed all of the way through," Ashley continued. "She has fought a battle that not many, if any, of us could have endured and she’s earned the love and respect of many on the way. The truth is though, I hope and pray that I have earned hers! Even through the hardest and saddest time of my life, she has found a way to make it better. She has shined light on the darkest of days and she has opened my heart to amounts of love I couldn’t believe possible! ❤️"

"The truth is, I don't know what I will do without you. But for now, I find strength in giving you the best of me, and the only me that you deserve! ❤️, " Ashley added, before concluding, "You are in my arms, my thoughts, my prayers and my heart everyday [sic] my princess. YOU'RE MY HERO! ✊🏾"

In his final post before her passing, Ashley shared on Saturday that he'd taken his daughter for a walk outside to enjoy the sunshine. "I thought we’d make the most of the sun today and have a little walk, as nurses came and told us this morning, to make the most of this weekend as Azaylia is becoming very fragile. 😢"

"Shortly after these photos were taken Azaylia had a seizure," he continued. "Her eyes rolled back, she stopped breathing and her body went as stiff as a board. We put her on oxygen straight away and called for the oncall nurses. After a few hours of close observation we managed to settle her. This has happened a few times now, but it never gets any easier. Yet she continues to battle through! 💔"

"Your determination inspires me," He continued. "You impress me each and every day. I'm so proud of you. I can't imagine my life without you. I have faith in you. My Champion. My Hero. I love you. ❤️"

Ashley and Safiyya have kept their followers updated throughout Azaylia's leukemia battle.

On March 25, Ashley revealed that his daughter had relapsed, writing that he and Safiyya were "devastated" by the news.

A few days later, Ashley launched a GoFundMe so they could travel to Singapore to try CAR-T therapy for Azaylia, noting that it was their "ONLY option." In less than 24 hours, they had received over £1 million pounds (over $1.3 million USD) in donations. (Ashley also organized a 150-mile charity bike ride to honor Azaylia as well as other children battling cancer.)

As of April 25, the GoFundme has raised over £1.5 million pounds.

"There is no words to describe this feeling. But she has opened new doors to my life and my heart," Ashley wrote on Instagram at the time. "I could literally look at her all day and hold her till my arms give in. But mainly I will always be there for her as her daddy, her friend and her confidant! Daddy loves you baby, you've changed my life! ❤️❤️❤️"

Azaylia was diagnosed with leukemia in October.