Every season of The Bachelor or The Bachelorette promises to be the most dramatic yet, and while I’m tired of hearing the hyperbole, it does seem like the over-the-top exploitation of contestants does seem to heighten with every passing season. But at… 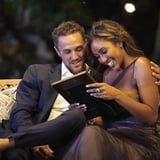 Every season of The Bachelor or The Bachelorette promises to be the most dramatic yet, and while I'm tired of hearing the hyperbole, it does seem like the over-the-top exploitation of contestants does seem to heighten with every passing season. But at what point is it too much? This season of The Bachelorette has been a roller coaster from the start, factoring in COVID-19, a runaway Bachelorette, and more drama than I can deal with. But what this season is also packed with is so many personal tragedies that I'm starting to feel really uncomfortable with as a viewer.

From the moment Tayshia Adams took over for Clare Crawley this season, she's been straightforward about wanting genuine honesty from her suitors. Valid. She should get that. What she's getting in return are a lot of sob stories that, while genuine, are stories of deep-seated tragedy that really don't need to be dealt with in front of a national audience. During the episode on Dec. 8, while Tayshia was on a date with Ben Smith, she practically called him out for holding back. While she couldn't possibly have known the intricacies of his past, it's that feeling of thinking they'll get dumped from the show that probably leads these contestants to open up about things they maybe weren't ready for. For Ben, it was talking about past suicide attempts.

The franchise has dealt with deeply personal stories over the years, always putting contestants in a position where they feel if they don't share, they're at risk of elimination.

In talking about his past, Ben shared that his sister was the most important person to him because she'd saved his life more often than she ever knew. He told Tayshia he'd been in a very dark place and decided he didn't want to live anymore. Though he shared his gratitude for his sister being there for him and his happiness with failing at his suicide attempt, he was visibly uncomfortable throughout most of the conversation. Sure, in the end he shrugged it off and said he felt better, and while there's a good chance it did feel good to share his story with a woman he's clearly falling in love with, it's probably not a conversation he's excited to share with millions of people. He even admitted that his sister didn't know most of the story - and she was the one involved.

For Ben, in particular, that wasn't even the first heavy topic he discussed. He'd previously shared with Tayshia that he had an eating disorder, which is what led him to becoming a personal trainer and staying healthy. Add to this Zac Clark's story about his past addiction and cleaning himself up and Riley opening up about his dark days and changing his name to start a new life, and you've got a cast of characters airing absolutely every tiny morsel of their dirty laundry on national television because they feel like they have to.

Yes, there's an expectation when you sign up for reality TV that the world's going to find out about all your sh*t. Though it's a given, there still has to be a line drawn in the sand somewhere. At what point do these touching stories about your life that you're sharing with a partner become blatant exploitation? ABC has been toeing the line for many seasons, and I think they've finally truly crossed it with pushing Ben to share his suicide attempts. It's a part of himself that he's well within his right to share with a partner, and it's a topic that carries a stigma that shouldn't, but it's also something that is inevitably going to take up more room in his life because he's just resurfaced a past trauma. While there is a psychologist on the set, my only hope is that ABC is offering continued mental health services to any contestant who might need it after their time on the show.

And that's where this frustrates me: these topics should be discussed more openly. Addiction, suicide, mental health, and all these hard topics carry a stigma, and people need to become more comfortable with discussing them so that people who need help can get it. The fact of the matter is that we're just not there yet, and forcing these conversations on this scale probably isn't all that helpful to those involved. That's not to say some of these topics aren't handled well on the show.

READ:  This $11 Anti-Cellulite Cream Is a Secret Hit on Amazon

Some of these deep conversations are incredibly powerful to the contestants and viewers and feel like a more natural conversation rather than probing for information. When Ivan Hall and Tayshia had a date on the Nov. 24 episode, the two shared an extremely touching conversation about being Black in America, something that no one has ever openly discussed in franchise history. With ABC only ever having one Black lead before Tayshia, there was no room for this conversation before. It's a relevant discussion that needs to be had in a public forum, and for that to be made a focal point of an episode was truly stunning.

Though mental health and race are vastly different topics, they're both topics that can and quite possibly do relate to personal trauma, and if not handled carefully they can turn into an even heavier burden on a contestant after they've shared on the show. The franchise has dealt with deeply personal stories over the years, always putting contestants in a position where they feel if they don't share, they're at risk of elimination. Caelynn Miller-Keyes opened up about her past sexual assault while on Colton Underwood's season of The Bachelor, and while it's unbelievably commendable for her to speak up on such a topic, the way the show twists these tragedies makes the strength it takes to share them fall flat.

During Rachel Lindsay's season as The Bachelorette, viewers were hit with tragedy right out of the gate with Josiah Graham. His introduction to Rachel included his backstory of his brother hanging himself after being bullied. Once again, an absolutely devastating story that any person would share with their significant other while getting to know them, but not necessarily if you're on national television. It's just really unfortunate that ABC is painting the picture of these people only being the sum of their tragedies rather than allowing them to put more focus on their positive attributes and what they can bring to a relationship.

Exploiting tragedies comes with the territory of reality TV and competition shows in general. You'd be hard-pressed to find a competition where someone isn't throwing in their own sob story in order to win, but a tragic story from your past probably isn't going to "win" you The Bachelor or The Bachelorette. Instead it's going to make for compelling TV and provide more strings for production to pull while orchestrating the whole thing from behind the scenes. The contestants on these shows are real people with real tragedies, and I'm tired of watching them get exploited just because they wanted to be on television. That's no reason to make them share their trauma with the world.