It all ends here at La Quinta Resort and Spa.

Well, guys, we’ve made it. 11 weeks later The Bachelorette finale is upon us, and I have a pretty good idea of who Tayshia is going to end up with. After 2 hours of mostly filler scenes and drawn-out conversations, Tayshia has accepted Zac Clark’s proposal and I’m pretty happy for them. Let’s see how we got here.

We pick up where we left off with Ben and Tayshia’s conversation. Ben tells her he loves her and she tells him it might be too late. “I wish I had heard it sooner,” she says. “Because I was almost there.” Mic. Drop.

Tayshia walks Ben out and as soon as I think she’s going to deny him a hug, they embrace. As soon as I’m sure she’s going to walk back inside, she reaches up for a kiss. Tayshia seems confused as to why she made the move, but tbh it makes perfect sense to me: He’s hot AF and just confessed his love for her. Yeah, I’d smooch him too.

We arrive at the rose ceremony and I just know Tayshia is about to break poor Ivan’s heart. As soon as she asks him to talk, I know it’s over.

Tayshia sites their differences in religious beliefs as the reason she’s ending it with him, and he seems to understand. I need more context here. Is he not religious enough? Is he an atheist? I know her faith is important to her. Are the other guys religious? So many questions that will probably never be answered.

I was texting with a friend about the situation and she mused, “maybe she was faking it with Ivan because he was so good on paper. She didn’t even cry.” Yep, seems sus. And herein starts my campaign for Ivan for the Bachelor 2022 (!!).

And now it’s time for Zac and Ben, our final two, to meet Tayshia’s family. As Tayshia explains to her parents and brothers that Ben came back after he was sent home, her dad asks the question we’d all like an answer to: “How’d he just come back?” I like this guy.

Tayshia hypes Ben up to her family and shows off his West Point roots, something she knew her dad would appreciate, clearly. She’s really trying to sell him.

Ben sits down one-on-one with her dad and says, “it’s great to finally meet you.” Dad’s response? “Right.” Seriously, I love this guy.

Ben is clearly trying so hard to prove himself to Tayshia’s family, I almost feel bad for him. It’s a valiant effort, but I just know they’re going to like Zac so much more.

And now, it’s Zac’s turn to meet the fam, and he passes with flying colors. He’s well-spoken, mature and really able to vocalize his feeling. I’m going to say it: Zac has high emotional intelligence. Take that, Bennett.

Tayshia’s dad declares, “he’s a good man,” and her mom says she can really see the chemistry between Tayshia and Zac, and I know it’s all over for Ben.

It’s becoming clear her dad did not want her to come on this show. “There’s no rush,” he tells Tayshia, to which she responds, “Dad, we get it!” Her story about him sitting next to her while she cried in the car really got me though. He’s seen her at her lowest point, when she was hurting the most, and he doesn’t want her to experience that pain again. Seriously, I could cry. 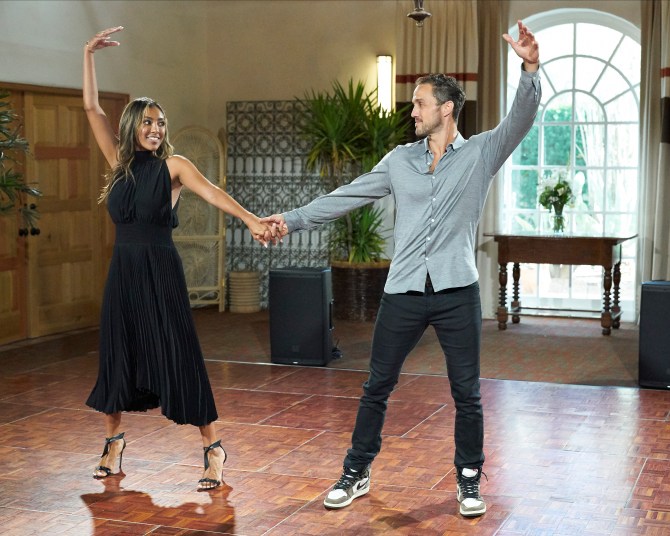 Just when I thought we’d be moving onto the proposal scene, we learn we actually hate two more dates to sit through. Tayshia is a nervous wreck at her dance class with Zac, but he does get her to loosen up by the end. More points for Zac!

“I think she believes in me,” he says with such earnest, I audibly “aww’d” at my TV. They do seem like they want the best for each other and it feels like he really wants to give her what she needs. He is 100% there for the right reasons. I do find it interesting that she wont say “I love you” again to him and only to the producers. I need to know these “I love you” rules they’re operating with.

Which bring us to, Ben’s breakup. This was a long time coming, If Brendan stuck around, I’m sure Tayshia would have had a harder time making this decision, but between Zac and Ben, the answer is pretty obvious.

Ben is sweating during this conversation. He doesn’t know where it’s going, until he does. The realization on his face is completely heartbreaking. “I thought I was going to be her husband,” Ben says. Cue the tears.

Tayshia is doing the right thing by letting him go. Ben needs to find himself a little more and work on being vulnerable and open naturally. You don’t want to live a life with someone who needs a push every time you want them to open up.

Proposal time! My favorite proposals in Bachelor nation are the ones where there’s only one contestant left, but they don’t know it. So we’re watching them sweat and get nervous when we know they’ve already won. Good for Zac. 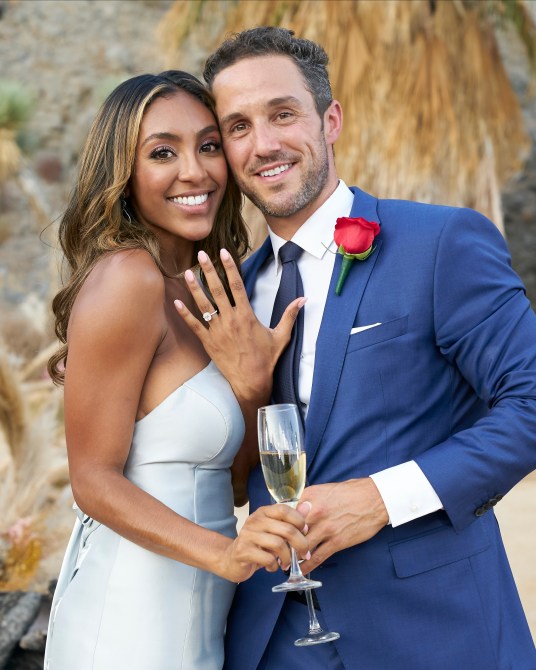 Zac and Tayshia spill their love for each other and tell each other cute and corny things. Zac proposes and they ride off into the sunset in a little cardboard taxi. The end!

READ:  Save Up to 60% During the Hatch End of Season Sale

See you next year when we recap Matt James’s season of The Bachelor. I couldn’t be more excited that we’re jumping right into a new season, and a historical season at that with the first-ever Black male lead. Bring on the tears!!