“Not every truth needs to be said, Thomas.”

Let me just say it: Katie’s season of The Bachelorette is one of the best I’ve watched in awhile. I don’t mean any shade with that (Tayshia, I love you), but this season feels…genuine. The drama doesn’t feel manufactured, the men have interesting backstories, and Katie isn’t afraid to be honest, which we saw last night.

The episode picks up right where we left off at the cocktail party after Karl straight up lied to Katie’s face about men in the house not being there for the “right reasons.” He went to her with zero proof and then the men called him out on it. His vague answers coupled with him running away to throw some air punches in front of the camera (just go with it) lets us know that he’s absolutely, completely, one hundred percent full of it. However, one person is still naive to this fact: Katie.

The Bachelorette comes in to announce that the cocktail party is over and they proceed to the rose ceremony. Then, something happens that I’ve never seen happen in the Bachelor franchise’s history. Virgin Mike walks up to accept his rose and tells her, “What Karl said wasn’t the truth.”

Katie asks the rest of the men if they feel the same way and they all nod their heads. (By this point, I’m freaking out.) Karl gets sent home and walks out without even saying goodbye. Coward. OK, moving on! 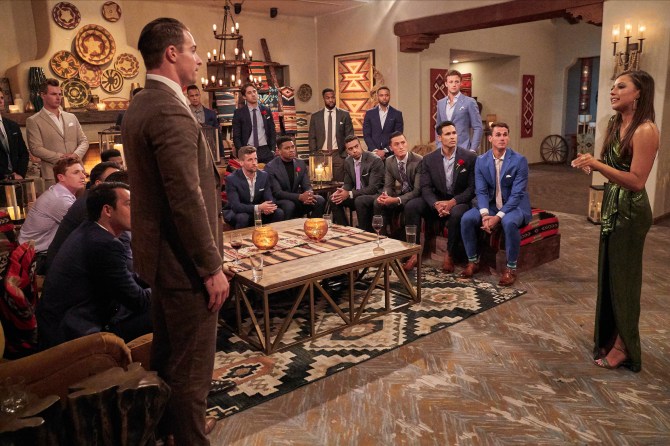 The first group date is essentially a support group led by Bachelor royalty, Nick Viall. Nick knows all about being on The Bachelorette, going on Bachelor in Paradise, and being the Bachelor (not that any of those shows worked for him, but that’s beside the point). The men and Katie are there to talk about their feelings. The men discuss getting divorced, losing trust in relationships, and even cheating. There are tears and words of encouragement—it’s all very therapeutic and dare I say heartwarming? Of course, that feeling doesn’t last because then it’s Thomas’ turn to talk and he shocks the crowd with a major truth bomb.

“I couldn’t sit here and look you in the face and say, ‘Yeah, when I showed up to this place I was here for the right reasons,’ because I didn’t know who you were,” he confesses to confused looks from the men. “And worst-case scenario, I’d give it a shot and, yeah you can build a great platform, and that’s just the honest to God truth, like my approach to this. I can sit here and tell you right now the best thing I ever did was lean into the potential of what could be here because the feelings that I have for you are real and I feel that it’s reciprocated.”

Um…um…huh? Did he really just admit to not coming on the show for love? I get that he didn’t know who the lead was going to be, but you can go on a blind date and still hope to fall in love. Either way, this is one of those things that you just keep to yourself. Not every truth needs to be said, Thomas. Katie doesn’t seem fazed by the admission and instead opens up about a past trauma in her life.

Katie shares that 10 years ago, she was “involved in a situation where there wasn’t consent.” “I was in denial about what happened, so much still that I tried to form a relationship with him because I didn’t want to believe what actually had happened,” she said. She continued. “And when that didn’t work out, for years I had a very unhealthy relationship with sex. I didn’t want to have sex, which affects a relationship. I didn’t like talking about sex. And it’s taken me a long time to get to where I am now. And being open and comfortable talking about it and loving myself and accepting things that I can no longer control.”

I really just want to give her a hug at this point. Tears are falling off her face and she’s struggling to maintain eye contact with the men. She even reveals that her mom doesn’t know she was assaulted. It’s a raw moment—almost too raw for The Bachelorette. 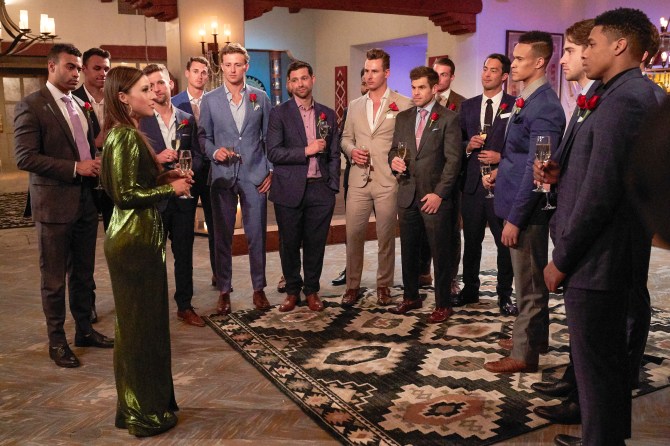 After the support group part of the date, the men and Katie reunite for cocktails. Thomas pulls Katie aside (twice!) and gushes to her, which feels totally inauthentic. My man, Aaron, says that he’s “full of shit.” I can’t help but agree. Katie doesn’t see it, which is frightening and I’m hoping we don’t watch her fall in love with him only to get her heart broken in the end…sigh.

The episode ends with a one-on-one date that has me reaching for tissues. Katie and Michael A. connect as he tells her about his wife, who he lost to cancer. His college sweetheart gave birth to their son in 2016 and seven months after, was diagnosed with breast cancer. She passed away in 2019. He and Katie are both wiping away tears while he talks and then he utters the most beautiful statement: “The way I look at this is, what a gift to be able to fall in love twice.”

He obviously gets the rose and possibly Katie’s heart in the process. “This could be the start of me falling in love with Michael,” she says in an on-camera interview before bursting into tears again. Well, she and I both.

The Bachelorette airs Mondays at 8 p.m. on ABC.

Watch 'The Bachelorette' $5.99+
READ:  Rolling Ray Gives His Thoughts On The Recent Drama Between Slick Woods & Chrisean Rock—“Slick Woods Too Bald-Headed To Be Playing So Much”
Buy Now