When season two of The Baby-Sitters Club hits Netflix (fingers crossed for later this year!), you might notice a new face: Kyndra Sanchez is taking over for Xoc… 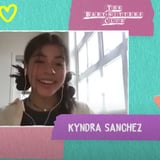 When season two of The Baby-Sitters Club hits Netflix (fingers crossed for later this year!), you might notice a new face: Kyndra Sanchez is taking over for Xochitl Gomez as Dawn Schafer. Sanchez was officially recast as Dawn in the upcoming season due to scheduling conflicts; Gomez scored the role of America Chavez, aka Miss America, in Doctor Strange in the Multiverse of Madness. This new casting offers exciting opportunities for both actors!

In an interview with Seventeen, Sanchez shared how she's most like Dawn, saying, "We both care for the environment, and have this fire inside of us that wants to spread our voices and make a difference." She went on to say how she's been "spreading kindness, love, and compassion" for the last five years by hosting lemonade stands for the Pediatric Cancer Research Foundations as well as visiting senior centers to sing Christmas carols and play the guitar. "I am a pescatarian and I am into spirituality," she added. "I have lots of crystals, I'm into zodiac signs, and I'm learning how to read tarot with my friends. Fun fact, I actually manifested getting this role."

You may recognize Sanchez from her supporting role in Netflix's Finding 'Ohana or her appearance in an episode of The Queen's Gambit. She has also lent her voice to several projects, including Nickelodeon's upcoming animated series Santiago of the Seas, in which she plays Bonnie Bones, a scheming pirate whose goal is to make life miserable for Santiago.

READ:  The Most Heartbreaking Revelations From the Framing Britney Spears Documentary

Sanchez is also a talented piano player and singer, which you can see for yourself on her Instagram page @kyndra_sanchez. She also posts about the environment, saying "Earth Day is everyday;)" on Earth Day, as well as sharing information about why the ocean is so important and causes she believes in, including the Stop AAPI Hate fundraiser to spread awareness about stopping racism, discrimination, and hate to Asian and Pacific Islander people and communities. Of course, her grid is also full of fashion-forward outfits, adorable poses, and familiar TBSC faces.

Although we are sad to say goodbye to Gomez on The Baby-Sitters Club, we are so excited to see the energy, positivity, and fun that Sanchez will no doubt bring to the role of Dawn. We can't wait to watch!