Well, folks, it’s time to buckle up because The Eternals is officially landing in the MCU! The latest trailer of the Chloé Zhao-directed film is out, and we have so many questions. Here’s one of our most pressing questions: What happened to these perf… 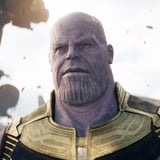 Well, folks, it's time to buckle up because The Eternals is officially landing in the MCU! The latest trailer of the Chloé Zhao-directed film is out, and we have so many questions. Here's one of our most pressing questions: What happened to these perfect and powerful beings when Thanos literally snapped half the universe out of existence in Infinity War? As we learn in the teaser, the Eternals have a personal rule about staying out of human affairs. But Thanos isn't a human - he's a purple alien, a Titan, to be exact. Which leads us to our other queries: Given that the Eternals are somewhat an alien species, do they have any relationship with Thanos? And is Thanos himself an Eternal? If we're looking at the Marvel comics then, yes, Thanos is an Eternal - at least technically speaking anyway.

In the comics, Thanos comes from Eternal lineage. His father is Mentor, an Eternal who helmed a colony on Titan, Saturn's largest moon. Mentor, formerly A'Lars, and another Eternal named Sui-San go on to repopulate Titan. One of their sons is Thanos, who's affected by Deviant Syndrome, which means that he possesses a mutation called the Deviant gene. Though similar to the Eternals, the Deviants have destabilized and mutated DNA that leads to physical oddities such as, well, purple skin. In the comics, Thanos' supervillain origins take root in his affections for the goddess Death. To impress her, he wields the infamous Infinity Gauntlet to commit genocide across the universe. Thanos' motivations in the Marvel films are more philosophical and nebulous (something along the lines of "saving" the universe), but the gauntlet should definitely ring a bell if you've tuned into Infinity War and Endgame.

READ:  How Candace Cameron Bure Got Her Skin Looking Better in Her 40s Than 20s

If we're looking at the MCU films, we know, so far, that Thanos is a Titan. With The Eternals and Guardians of the Galaxy Vol. 3 in the works, we're probably going to learn more about Thanos' twisted past sooner than later. If anything, Thanos' backstory could very well be one of the connective tissues between Phase Three and Phase Four. We'll just have to wait and see how it all plays out, but we're betting on seeing more of Thanos over the years.